2 And the Philistines put themselues in aray against Israel: and when they ioyned battell, Israel was smitten before the Philistines: and they slew of the armie in the field, about foure thousand men.

3 ¶ And when the people were come into the campe, the Elders of Israel said, Wherefore hath the Lord smitten vs to day before the Philistines? Let vs fetch the Arke of the Couenant of the Lord out of Shiloh vnto vs, that when it commeth among vs, it may saue vs out of the hand of our enemies.

5 And when the Arke of the Couenant of the Lord came into the campe, all Israel shouted with a great shout, so that the earth rang againe.

6 And when the Philistines heard the noise of the shout, they said, What meaneth the noise of this great shout in the campe of the Hebrewes? And they vnderstood, that the Arke of the Lord was come into the campe.

7 And the Philistines were afraid, for they saide, God is come into the campe. And they said, Woe vnto vs: for there hath not bene such a thing heretofore.

8 Woe vnto vs: who shall deliuer vs out of the hand of these mightie Gods? these are the Gods that smote the Egyptians with all the plagues in the wildernesse.

10 ¶ And the Philistines fought, and Israel was smitten, and they fled euery man into his tent: and there was a very great slaughter, for there fell of Israel thirtie thousand footmen.

11 And the Arke of God was taken, and the two sonnes of Eli, Hophni, and Phinehas were slaine.

12 ¶ And there ran a man of Beniamin out of the army, and came to Shiloh the same day with his clothes rent, and with earth vpon his head.

13 And when hee came, loe, Eli sate vpon a seat by the way side, watching: for his heart trembled for the Arke of God. And when the man came into the citie, and told it, all the city cried out.

15 Now Eli was ninetie and eight yeeres old, and his eyes were dimme, that he could not see.

17 And the messenger answered, and said, Israel is fled before the Philistines, and there hath bene also a great slaughter among the people, and thy two sonnes also, Hophni & Phinehas, are dead, and the Arke of God is taken.

18 And it came to passe when hee made mention of the Arke of God, that he fell from off the seat backward by the side of the gate, and his necke brake, and hee died: for hee was an old man, and heauie, and hee had iudged Israel fortie yeeres.

19 ¶ And his daughter in law Phinehas wife was with childe neere to be deliuered: and when shee heard the tidings that the Arke of God was taken, and that her father in law, and her husband were dead, shee bowed her selfe and traueyled; for her paines came vpon her.

20 And about the time of her death, the women that stood by her, said vnto her: Feare not, for thou hast borne a sonne. But she answered not, neither did she regard it.

21 And she named the childe Ichabod, saying, The glory is departed from Israel, (because the Arke of God was taken, and because of her father in law and her husband.)

22 And she said, The glory is departed from Israel: for the Arke of God is taken.

The Israelites overcome by the Philistines. (1-9) The ark taken. (10,11) The death of Eli. (12-18) The birth of Ichabod. (19-22)1-9 Israel is smitten before the Philistines. Sin, the accursed thing, was in the camp, and gave their enemies all the advantage they could wish for. They own the hand of God in their trouble; but, instead of submitting, they speak angrily, as not aware of any just provocation they had given him. The foolishness of man perverts his way, and then his heart frets against the Lord, #Pr 19:3|, and finds fault with him. They supposed that they could oblige God to appear for them, by bringing the ark into their camp. Those who have gone back in the life of religion, sometimes discover great fondness for the outward observances of it, as if those would save them; and as if the ark, God's throne, in the camp, would bring them to heaven, though the world and the flesh are on the throne in the heart.

10,11 The taking of the ark was a great judgment upon Israel, and a certain token of God's displeasure. Let none think to shelter themselves from the wrath of God, under the cloak of outward profession.

12-18 The defeat of the army was very grievous to Eli as a judge; the tidings of the death of his two sons, to whom he had been so indulgent, and who, as he had reason to fear, died impenitent, touched him as a father; yet there was a greater concern on his spirit. And when the messenger concluded his story with, "The ark of God is taken," he is struck to the heart, and died immediately. A man may die miserably, yet not die eternally; may come to an untimely end, yet the end be peace.

19-22 The wife of Phinehas seems to have been a person of piety. Her dying regret was for the loss of the ark, and the departure of the glory from Israel. What is any earthly joy to her that feels herself dying? No joy but that which is spiritual and divine, will stand in any stead then; death is too serious a thing to admit the relish of any earthly joy. What is it to one that is lamenting the loss of the ark? What pleasure can we take in our creature comforts and enjoyments, if we want God's word and ordinances; especially if we want the comfort of his gracious presence, and the light of his countenance? If God go, the glory goes, and all good goes. Woe unto us if he depart! But though the glory is withdrawn from one sinful nation, city, or village after another, yet it shall never depart altogether, but shines forth in one place when eclipsed in another.

View All Discussusion for 1 Samuel Chapter 4... 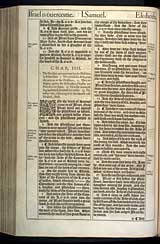