1 And Saul spake to Ionathan his sonne, and to all his seruants, that they should kill Dauid.

2 But Ionathan Sauls sonne delighted much in Dauid, and Ionathan told Dauid, saying, Saul my father seeketh to kill thee: Now therefore, I pray thee, take heed to thy selfe vntill the morning, and abide in a secret place, and hide thy selfe:

3 And I will goe out and stand beside my father in the field where thou art, and I will commune with my father of thee, and what I see, that I will tell thee.

4 ¶ And Ionathan spake good of Dauid vnto Saul his father, and said vnto him, Let not the King sinne against his seruant, against Dauid: because hee hath not sinned against thee, and because his workes haue bene to thee ward very good.

5 For he did put his life in his hand, and slew the Philistine, & the Lord wrought a great saluation for all Israel: thou sawest it, and didst reioyce: Wherefore then wilt thou sinne against innocent blood, to slay Dauid without a cause?

6 And Saul hearkened vnto the voyce of Ionathan; and Saul sware, As the Lord liueth, he shall not be slaine.

7 And Ionathan called Dauid, and Ionathan shewed him all those things: and Ionathan brought Dauid to Saul, and he was in his presence, as in times past.

8 ¶ And there was warre againe, and Dauid went out, and fought with the Philistines, and slew them with a great slaughter, & they fled from him.

9 And the euill spirit from the Lord was vpon Saul, as he sate in his house with his iauelin in his hand: and Dauid played with his hand.

10 And Saul sought to smite Dauid euen to the wall with the iauelin: but hee slipt away out of Sauls presence, and he smote the iauelin into the wall: and Dauid fled, and escaped that night.

11 Saul also sent messengers vnto Dauids house, to watch him, and to slay him in the morning: and Michal Dauids wife tolde him, saying, If thou saue not thy life to night, to morrow thou shalt be slaine.

12 ¶ So Michal let Dauid downe thorow a window: and hee went and fled, and escaped.

13 And Michal tooke an image, and laid it in the bedde, and put a pillow of goats haire for his bolster, and couered it with a cloth.

14 And when Saul sent messengers to take Dauid, she said, He is sicke.

15 And Saul sent the messengers againe to see Dauid, saying, Bring him vp to me in the bedde, that I may slay him.

16 And when the messengers were come in, behold, there was an image in the bed, with a pillow of goates haire for his bolster.

17 And Saul said vnto Michal, Why hast thou deceiued me so, and sent away mine enemie, that he is escaped? And Michal answered Saul, Hee said vnto me, Let mee goe; Why should I kill thee?

18 ¶ So Dauid fledde, and escaped, and came to Samuel to Ramah, and told him all that Saul had done to him: and hee and Samuel went, and dwelt in Naioth.

19 And it was told Saul, saying, Behold, Dauid is at Naioth in Ramah.

20 And Saul sent messengers to take Dauid: and when they sawe the company of the Prophets prophecying, and Samuel standing as appointed ouer them, the Spirit of God was vpon the messengers of Saul, and they also prophecied.

22 Then went hee also to Ramah, and came to a great well that is in Sechu: and he asked, and said, Where are Samuel and Dauid? And one said, Behold, they be at Naioth in Ramah.

24 And he stript off his clothes also, and prophecied before Samuel in like manner, and lay downe naked all that day, and all that night: wherefore they say, Is Saul also among the Prophets?

Jonathan reconciles his father to David, Saul again tries to slay him. (1-10) David flees to Samuel. (11-24)1-10 How forcible are right words! Saul was, for a time, convinced of the unreasonableness of his enmity to David; but he continued his malice against David. So incurable is the hatred of the seed of the serpent against that of the woman; so deceitful and desperately wicked is the heart of man without the grace of God, #Jer 17:9|.

11-24 Michal's stratagem to gain time till David got to a distance was allowable, but her falsehood had not even the plea of necessity to excuse it, and manifests that she was not influenced by the same spirit of piety which had dictated Jonathan's language to Saul. In flying to Samuel, David made God his refuge. Samuel, as a prophet, was best able to advise him what to do in this day of distress. He met with little rest or satisfaction in Saul's court, therefore went to seek it in Samuel's church. What little pleasure is to be had in this world, those have who live a life of communion with God; to that David returned in the time of trouble. So impatient was Saul after David's blood, so restless against him, that although baffled by one providence after another, he could not see that David was under the special protection of God. And when God will take this way to protect David, even Saul prophesies. Many have great gifts, yet no grace; they may prophesy in Christ's name, yet are disowned by him. Let us daily seek for renewing grace, which shall be in us as a well of water springing up into everlasting life. Let us cleave to truth and holiness with full purpose of heart. In every danger and trouble, let us seek protection, comfort, and direction in God's ordinances.

View All Discussusion for 1 Samuel Chapter 19... 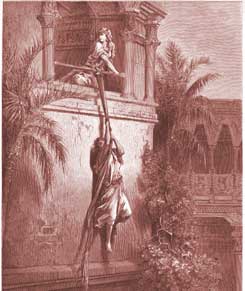 David Escapes through a Window 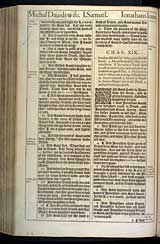