3 And this man went vp out of his citie yeerely, to worship and to sacrifice vnto the Lord of hostes in Shiloh; and the two sonnes of Eli, Hophni, and Phinehas, the Priests of the Lord, were there.

4 ¶ And when the time was, that Elkanah offered, he gaue to Peninnah his wife, and to all her sonnes, and her daughters, portions.

5 But vnto Hannah he gaue a worthy portion: (for he loued Hannah, but the Lord had shut vp her wombe.

6 And her aduersary also prouoked her sore, for to make her fret, because the Lord had shut vp her wombe.)

7 And as he did so yeere by yeere, when she went vp to the house of the Lord, so she prouoked her; therefore she wept, and did not eat.

8 Then said Elkanah her husband to her, Hannah, why weepest thou? and why eatest thou not? and why is thy heart grieued? Am not I better to thee, then ten sonnes?

9 ¶ So Hannah rose vp after they had eaten in Shiloh, and after they had drunke; (now Eli the Priest sate vpon a seat by a poste of the Temple of the Lord. )

10 And shee was in bitternesse of soule, and prayed vnto the Lord, and wept sore.

11 And she vowed a vow, and said, O Lord of hostes, if thou wilt indeed looke on the affliction of thine handmayd, and remember me, and not forget thine handmayd, but wilt giue vnto thine handmayd a man childe, then I will giue him vnto the Lord all the dayes of his life, and there shall no rasor come vpon his head.

12 And it came to passe as she continued praying before the Lord, that Eli marked her mouth.

13 Now Hannah, shee spake in her heart; onely her lippes mooued, but her voice was not heard: therefore Eli thought she had beene drunken.

14 And Eli said vnto her, How long wilt thou be drunken? put away thy wine from thee.

15 And Hannah answered, and said, No, my lord, I am a woman of a sorrowfull spirit: I haue drunke neither wine nor strong drinke, but haue powred out my soule before the Lord.

16 Count not thine handmaid for a daughter of Belial: for out of the abundance of my complaint and griefe, haue I spoken hitherto.

17 Then Eli answered, and said, Goe in peace: and the God of Israel grant thee thy petition, that thou hast asked of him.

18 And she said, Let thine handmaid finde grace in thy sight. So the woman went her way, and did eate, and her countenance was no more sad.

19 ¶ And they rose vp in the morning early, and worshipped before the Lord, and returned, and came to their house to Ramah: and Elkanah knewe Hannah his wife, and the Lord remembred her.

20 Wherefore it came to passe when the time was come about, after Hannah had conceiued, that shee bare a sonne, and called his name Samuel, saying; Because I haue asked him of the Lord.

21 And the man Elkanah, and all his house, went vp to offer vnto the Lord the yeerely sacrifice, and his vowe.

22 But Hannah went not vp; for shee said vnto her husband, I will not goe vp vntill the childe be weaned, and then I will bring him, that he may appeare before the Lord, and there abide for euer.

23 And Elkanah her husband said vnto her, Do what seemeth thee good, tary vntill thou haue weaned him, only the Lord establish his word: so the woman abode, and gaue her sonne sucke vntill she weaned him.

24 ¶ And when shee had weaned him, shee tooke him vp with her, with three bullocks, and one Ephah of floure, and a bottle of wine, and brought him vnto the house of the Lord in Shiloh: and the childe was young.

25 And they slew a bullocke, and brought the childe to Eli.

26 And she said, Oh my lord, as thy soule liueth, my lord, I am the woman, that stood by thee heere, praying vnto the Lord.

27 For this childe I prayed, and the Lord hath giuen me my petition, which I asked of him:

28 Therefore also I haue lent him to the Lord as long as hee liueth, he shall be lent to the Lord. And he worshipped the Lord there.

In this book we have an account of Eli, and the wickedness of his sons; also of Samuel, his character and actions. Then of the advancement of Saul to be the king of Israel, and his ill behaviour, until his death made way for David's succession to the throne, who was an eminent type of Christ. David's patience, modesty, constancy, persecution by open enemies and feigned friends, are a pattern and example to the church, and to every member of it. Many things in this book encourage the faith, hope, and patience of the suffering believer. It contains also many useful cautions and awful warnings.Elkanah and his family. (1-8) Hannah's prayer. (9-18) Samuel, Hannah presents him to the Lord. (19-28)1-8 Elkanah kept up his attendance at God's altar, notwithstanding the unhappy differences in his family. If the devotions of a family prevail not to put an end to its divisions, yet let not the divisions put a stop to the devotions. To abate our just love to any relation for the sake of any infirmity which they cannot help, and which is their affliction, is to make God's providence quarrel with his precept, and very unkindly to add affliction to the afflicted. It is evidence of a base disposition, to delight in grieving those who are of a sorrowful spirit, and in putting those out of humour who are apt to fret and be uneasy. We ought to bear one another's burdens, not add to them. Hannah could not bear the provocation. Those who are of a fretful spirit, and are apt to lay provocations too much to heart, are enemies to themselves, and strip themselves of many comforts both of life and godliness. We ought to notice comforts, to keep us from grieving for crosses. We should look at that which is for us, as well as what is against us.

9-18 Hannah mingled tears with her prayers; she considered the mercy of our God, who knows the troubled soul. God gives us leave, in prayer, not only to ask good things in general, but to mention that special good thing we most need and desire. She spoke softly, none could hear her. Hereby she testified her belief of God's knowledge of the heart and its desires. Eli was high priest, and judge in Israel. It ill becomes us to be rash and hasty in censures of others, and to think people guilty of bad things while the matter is doubtful and unproved. Hannah did not retort the charge, and upbraid Eli with the wicked conduct of his own sons. When we are at any time unjustly censured, we have need to set a double watch before the door of our lips, that we do not return censure for censure. Hannah thought it enough to clear herself, and so must we. Eli was willing to acknowledge his mistake. Hannah went away with satisfaction of mind. She had herself by prayer committed her case to God, and Eli had prayed for her. Prayer is heart's ease to a gracious soul. Prayer will smooth the countenance; it should do so. None will long remain miserable, who use aright the privilege of going to the mercy-seat of a reconciled God in Christ Jesus.

19-28 Elkanah and his family had a journey before them, and a family of children to take with them, yet they would not move till they had worshipped God together. Prayer and provender do not hinder a journey. When men are in such haste to set out upon journeys, or to engage in business, that they have not time to worship God, they are likely to proceed without his presence and blessing. Hannah, though she felt a warm regard for the courts of God's house, begged to stay at home. God will have mercy, and not sacrifice. Those who are detained from public ordinances, by the nursing and tending of little children, may take comfort from this instance, and believe, that if they do that duty in a right spirit, God will graciously accept them therein. Hannah presented her child to the Lord with a grateful acknowledgment of his goodness in answer to prayer. Whatever we give to God, it is what we have first asked and received from him. All our gifts to him were first his gifts to us. The child Samuel early showed true piety. Little children should be taught to worship God when very young. Their parents should teach them in it, bring them to it, and put them on doing it as well as they can; God will graciously accept them, and will teach them to do better.

View All Discussusion for 1 Samuel Chapter 1... 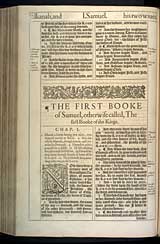