2 That he no longer should liue the rest of his time in the flesh, to the lusts of men, but to the will of God.

3 For the time past of our life may suffice vs to haue wrought the will of the Gentiles, when we walked in lasciuiousnes, lusts, excesse of wine, reuellings, banquetings, and abhominable idolatries.

4 Wherein they thinke it strange, that you runne not with them to the same excesse of riot, speaking euil of you:

5 Who shal giue accompt to him that is ready to iudge the quicke & the dead.

6 For, for this cause was the Gospel preached also to them that are dead, that they might bee iudged according to men in the flesh, but liue according to God in the spirit.

7 But the ende of all things is at hand: be ye therefore sober and watch vnto prayer.

8 And aboue all things haue feruent charitie among your selues: for charity shall couer the multitude of sinnes.

9 Use hospitalitie one to another without grudging.

10 As euery man hath receiued the gift, euen so minister the same one to another, as good stewards of the manifold grace of God.

11 If any man speake, let him speake as the oracles of God: if any man minister, let him doe it as of the ability which God giueth, that God in all things may bee glorified through Iesus Christ, to whom be praise and dominion for euer and euer. Amen.

12 Beloued, thinke it not strange concerning the fiery triall, which is to try you, as though some strange thing happened vnto you.

13 But reioyce in as much as yee are partakers of Christes sufferings; that when his glory shalbe reueiled, ye may be glad also with exceeding ioy.

14 If ye be reproched for the Name of Christ, happie are ye, for the spirit of glory, and of God resteth vpon you: on their part hee is euill spoken of, but on your part he is glorified.

15 But let none of you suffer as a murtherer, or as a theefe, or as an euill doer, or as a busibody in other mens matters.

16 Yet if any man suffer as a Christian, let him not be ashamed, but let him glorifie God on this behalfe.

17 For the time is come that iudgement must begin at the house of God: and if it first begin at vs, what shall the ende bee of them that obey not the Gospel of God?

18 And if the righteous scarcely be saued, where shall the vngodly and the sinner appeare?

19 Wherfore, let them that suffer according to the will of God, commit the keeping of their soules to him in well doing, as vnto a faithfull Creator.

The consideration of Christ's sufferings is urged for purity and holiness. (1-6) And the approaching end of the Jewish state, as a reason for sobriety, watchfulness, and prayer. (7-11) Believers encouraged to rejoice and glory in reproaches and sufferings for Christ, and to commit their souls to the care of a faithful God. (12-19)1-6 The strongest and best arguments against sin, are taken from the sufferings of Christ. He died to destroy sin; and though he cheerfully submitted to the worst sufferings, yet he never gave way to the least sin. Temptations could not prevail, were it not for man's own corruption; but true Christians make the will of God, not their own lust or desires, the rule of their lives and actions. And true conversion makes a marvellous change in the heart and life. It alters the mind, judgment, affections, and conversation. When a man is truly converted, it is very grievous to him to think how the time past of his life has been spent. One sin draws on another. Six sins are here mentioned which have dependence one upon another. It is a Christian's duty, not only to keep from gross wickedness, but also from things that lead to sin, or appear evil. The gospel had been preached to those since dead, who by the proud and carnal judgment of wicked men were condemned as evil-doers, some even suffering death. But being quickened to Divine life by the Holy Spirit, they lived to God as his devoted servants. Let not believers care, though the world scorns and reproaches them.

7-11 The destruction of the Jewish church and nation, foretold by our Saviour, was very near. And the speedy approach of death and judgment concerns all, to which these words naturally lead our minds. Our approaching end, is a powerful argument to make us sober in all worldly matters, and earnest in religion. There are so many things amiss in all, that unless love covers, excuses, and forgives in others, the mistakes and faults for which every one needs the forbearance of others, Satan will prevail to stir up divisions and discords. But we are not to suppose that charity will cover or make amends for the sins of those who exercise it, so as to induce God to forgive them. The nature of a Christian's work, which is high work and hard work, the goodness of the Master, and the excellence of the reward, all require that our endeavours should be serious and earnest. And in all the duties and services of life, we should aim at the glory of God as our chief end. He is a miserable, unsettled wretch, who cleaves to himself, and forgets God; is only perplexed about his credit, and gain, and base ends, which are often broken, and which, when he attains, both he and they must shortly perish together. But he who has given up himself and his all to God, may say confidently that the Lord is his portion; and nothing but glory through Christ Jesus, is solid and lasting; that abideth for ever.

12-19 By patience and fortitude in suffering, by dependence on the promises of God, and keeping to the word the Holy Spirit hath revealed, the Holy Spirit is glorified; but by the contempt and reproaches cast upon believers, he is evil spoken of, and is blasphemed. One would think such cautions as these were needless to Christians. But their enemies falsely charged them with foul crimes. And even the best of men need to be warned against the worst of sins. There is no comfort in sufferings, when we bring them upon ourselves by our own sin and folly. A time of universal calamity was at hand, as foretold by our Saviour, #Mt 24:9,10|. And if such things befall in this life, how awful will the day of judgment be! It is true that the righteous are scarcely saved; even those who endeavour to walk uprightly in the ways of God. This does not mean that the purpose and performance of God are uncertain, but only the great difficulties and hard encounters in the way; that they go through so many temptations and tribulations, so many fightings without and fears within. Yet all outward difficulties would be as nothing, were it not for lusts and corruptions within. These are the worst clogs and troubles. And if the way of the righteous be so hard, then how hard shall be the end of the ungodly sinner, who walks in sin with delight, and thinks the righteous is a fool for all his pains! The only way to keep the soul well, is, to commit it to God by prayer, and patient perseverance in well-doing. He will overrule all to the final advantage of the believer.

View All Discussusion for 1 Peter Chapter 4... 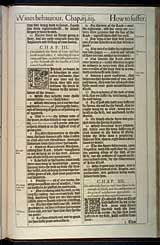