1 Wherefore laying aside all malice, and all guile, and hypocrisies, and enuies, and euill speakings,

2 As new borne babes desire the sincere milke of the word, that ye may grow thereby,

3 If so bee yee haue tasted that the Lord is gracious.

4 To whom comming as vnto a liuing Stone, disallowed in deed of men, but chosen of God, and precious,

6 Wherefore it is conteined in the Scripture, Beholde, I lay in Sion a chiefe corner stone, elect, precious, and he that beleeueth on him, shall not be confounded.

7 Unto you therfore which beleeue hee is precious; but vnto them which be disobedient, the stone which the builders disallowed, the same is made the head of the corner,

8 And a Stone of stumbling, and a Rocke of offence, euen to them which stumble at the word, being disobedient, whereunto also they were appointed.

9 But yee are a chosen generation, a royall Priesthood, an holy nation, a peculiar people, that yee should shewe forth the praises of him, who hath called you out of darknes into his marueilous light:

10 Which in time past were not a people, but are now the people of God: which had not obteined mercie, but now haue obteined mercy.

11 Dearely beloued, I beseech you as strangers and pilgrimes, abstaine from fleshly lusts, which warre against the soule,

12 Hauing your conuersation honest among the Gentiles, that whereas they speake against you as euill doers, they may by your good works which they shall behold, glorifie God in the day of visitation.

13 Submit your selues to euery ordinance of man for the Lordes sake, whether it be to the King, as supreme,

14 Or vnto gouernours, as vnto them that are sent by him, for the punishment of euil doers, and for the praise of them that doe well.

15 For so is the will of God, that with well doing yee may put to silence the ignorance of foolish men.

16 As free, and not vsing your libertie for a cloake of maliciousnesse, but as the seruants of God.

18 Seruants, be subiect to your masters with al feare, not only to the good and gentle, but also to the froward.

19 For this is thanke-worthie, if a man for conscience toward God endure griefe, suffering wrongfully.

21 For euen hereunto were ye called: because Christ also suffered for vs, leauing vs an example, that yee should follow his steps.

22 Who did no sinne, neither was guile found in his mouth.

23 Who when hee was reuiled, reuiled not againe; when hee suffered, hee threatned not, but committed himselfe to him that iudgeth righteously.

24 Who his owne selfe bare our sinnes in his owne body on the tree, that wee being dead to sinnes, should liue vnto righteousnesse, by whose stripes ye were healed.

25 For yee were as sheepe going astray, but are now returned vnto the shepheard and Bishop of your soules.

A temper suitable to the Christian character as born again, is recommended. (1-10) Holy conversation among the Gentiles directed. (11,12) Subjects exhorted to pay all proper obedience to their civil governors. (13-17) Also servants to their masters, and all to be patient, according to the example of the suffering Saviour. (18-25)1-10 Evil-speaking is a sign of malice and guile in the heart; and hinders our profiting by the word of God. A new life needs suitable food. Infants desire milk, and make the best endeavours for it which they are able to do; such must be a Christian's desires after the word of God. Our Lord Jesus Christ is very merciful to us miserable sinners; and he has a fulness of grace. But even the best of God's servants, in this life, have only a taste of the consolations of God. Christ is called a Stone, to teach his servants that he is their protection and security, the foundation on which they are built. He is precious in the excellence of his nature, the dignity of his office, and the glory of his services. All true believers are a holy priesthood; sacred to God, serviceable to others, endowed with heavenly gifts and graces. But the most spiritual sacrifices of the best in prayer and praise are not acceptable, except through Jesus Christ. Christ is the chief Corner-stone, that unites the whole number of believers into one everlasting temple, and bears the weight of the whole fabric. Elected, or chosen, for a foundation that is everlasting. Precious beyond compare, by all that can give worth. To be built on Christ means, to believe in him; but in this many deceive themselves, they consider not what it is, nor the necessity of it, to partake of the salvation he has wrought. Though the frame of the world were falling to pieces, that man who is built on this foundation may hear it without fear. He shall not be confounded. The believing soul makes haste to Christ, but it never finds cause to hasten from him. All true Christians are a chosen generation; they make one family, a people distinct from the world: of another spirit, principle, and practice; which they could never be, if they were not chosen in Christ to be such, and sanctified by his Spirit. Their first state is a state of gross darkness, but they are called out of darkness into a state of joy, pleasure, and prosperity; that they should show forth the praises of the Lord by their profession of his truth, and their good conduct. How vast their obligations to Him who has made them his people, and has shown mercy to them! To be without this mercy is a woful state, though a man have all worldly enjoyments. And there is nothing that so kindly works repentance, as right thoughts of the mercy and love of God. Let us not dare to abuse and affront the free grace of God, if we mean to be saved by it; but let all who would be found among those who obtain mercy, walk as his people.

11,12 Even the best of men, the chosen generation, the people of God, need to be exhorted to keep from the worst sins. And fleshly lusts are most destructive to man's soul. It is a sore judgment to be given up to them. There is a day of visitation coming, wherein God may call to repentance by his word and his grace; then many will glorify God, and the holy lives of his people will have promoted the happy change.

13-17 A Christian conversation must be honest; which it cannot be, if there is not a just and careful discharge of all relative duties: the apostle here treats of these distinctly. Regard to those duties is the will of God, consequently, the Christian's duty, and the way to silence the base slanders of ignorant and foolish men. Christians must endeavour, in all relations, to behave aright, that they do not make their liberty a cloak or covering for any wickedness, or for the neglect of duty; but they must remember that they are servants of God.

18-25 Servants in those days generally were slaves, and had heathen masters, who often used them cruelly; yet the apostle directs them to be subject to the masters placed over them by Providence, with a fear to dishonour or offend God. And not only to those pleased with reasonable service, but to the severe, and those angry without cause. The sinful misconduct of one relation, does not justify sinful behaviour in the other; the servant is bound to do his duty, though the master may be sinfully froward and perverse. But masters should be meek and gentle to their servants and inferiors. What glory or distinction could it be, for professed Christians to be patient when corrected for their faults? But if when they behaved well they were ill treated by proud and passionate heathen masters, yet bore it without peevish complaints, or purposes of revenge, and persevered in their duty, this would be acceptable to God as a distinguishing effect of his grace, and would be rewarded by him. Christ's death was designed not only for an example of patience under sufferings, but he bore our sins; he bore the punishment of them, and thereby satisfied Divine justice. Hereby he takes them away from us. The fruits of Christ's sufferings are the death of sin, and a new holy life of righteousness; for both which we have an example, and powerful motives, and ability to perform also, from the death and resurrection of Christ. And our justification; Christ was bruised and crucified as a sacrifice for our sins, and by his stripes the diseases of our souls are cured. Here is man's sin; he goes astray; it is his own act. His misery; he goes astray from the pasture, from the Shepherd, and from the flock, and so exposes himself to dangers without number. Here is the recovery by conversion; they are now returned as the effect of Divine grace. This return is, from all their errors and wanderings, to Christ. Sinners, before their conversion, are always going astray; their life is a continued error.

View All Discussusion for 1 Peter Chapter 2... 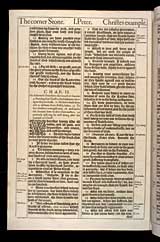