1 But Solomon was building his owne house thirteene yeres, and he finished all his house.

3 And it was couered with Cedar aboue vpon the beames, that lay on fortie fiue pillars, fifteene in a row.

4 And there were windowes in three rowes, and light was against light in three rankes.

5 And all the doores and postes were square, with the windowes: and light was against light in three rankes.

7 ¶ Then hee made a porch for the throne where he might iudge, euen the porch of Iudgement: and it was couered with Cedar from one side of the floore to the other.

8 ¶ And his house where he dwelt, had another court within the porch, which was of the like worke: Solomon made also an house for Pharaohs daughter, ( whom he had taken to wife) like vnto this porch.

9 All these were of costly stones, according to the measures of hewed stones, sawed with sawes, within and without, euen from the foundation vnto the coping, and so on the outside toward the great court.

10 And the foundation was of costly stones, euen great stones; stones of ten cubites, and stones of eight cubites.

11 And aboue were costly stones (after the measures of hewed stones) and Cedars.

12 And the great court round about, was with three rowes of hewed stones, and a row of Cedar beames, both for the inner court of the house of the Lord, and for the porch of the house.

13 ¶ And king Solomon sent and fet Hiram out of Tyre.

14 Hee was a widowes sonne of the tribe of Naphtali, and his father was a man of Tyre, a worker in brasse, and he was filled with wisedome, and vnderstanding, and cunning to worke all workes in brasse: and hee came to king Solomon, and wrought all his worke.

15 For he cast two pillars of brasse of eighteene cubites high a piece: and a line of twelue cubites did compasse either of them about.

17 And nets of checker worke, and wreathes of chaine worke, for the chapiters which were vpon the top of the pillars: seuen for the one chapiter, and seuen for the other chapiter.

18 And he made the pillars, and two rowes round about vpon the one networke, to couer the chapiters that were vpon the top, with pomegranates: and so did he for the other chapiter.

19 And the chapiters that were vpon the top of the pillars, were of lillie worke in the porch, foure cubites.

20 And the chapiters vpon the two pillars had pomegranates also, aboue, ouer against the belly which was by the networke: and the pomegranates were two hundred in rowes round about, vpon the other chapiter.

23 ¶ And he made a moulten Sea, ten cubites from the one brim to the other: it was round all about, & his height was fiue cubits: and a line of thirtie cubites did compasse it round about.

24 And vnder the brimme of it round about there were knops compassing it, ten in a cubite, compassing the sea round about: the knops were cast in two rowes, when it was cast.

26 And it was an hand breadth thicke, and the brimme thereof was wrought like the brim of a cup, with flowres of lillies: it contained two thousand Baths.

28 And the worke of the bases was on this maner: they had borders, and the borders were betweene the ledges:

29 And on the borders that were betweene the ledges were lyons, oxen, and Cherubims: and vpon the ledges there was a base aboue: and beneath the lyons and oxen were certaine additions made of thinne worke.

30 And euery base had foure brasen wheeles, and plates of brasse: and the foure corners therof had vndersetters: vnder the lauer were vndersetters molten, at the side of euery addition.

31 And the mouth of it within the chapiter, and aboue, was a cubite: but the mouth thereof was round after the worke of the base, a cubite and an halfe: and also vpon the mouth of it were grauings with their borders, foure square not round.

32 And vnder the borders were foure wheeles: & the axletrees of the wheeles were ioyned to the base, and the height of a wheele was a cubite and halfe a cubite.

36 For on the plates of the ledges thereof, and on the borders thereof, he graued Cherubims, lions, and palme trees, according to the proportion of euery one, and additions round about.

37 After this maner he made the ten bases: all of them had one casting, one measure, and one size.

38 ¶ Then made hee ten lauers of brasse: one lauer conteined fourtie baths: and euery lauer was foure cubites, and vpon euery one of the ten bases, one lauer.

40 ¶ And Hiram made the lauers, and the shouels, and the basons: So Hiram made an ende of doing all the worke that hee made King Solomon, for the house of the Lord.

43 And the ten bases, and ten lauers on the bases.

44 And one Sea, and twelue oxen vnder the Sea.

45 And the pots, and the shouels, and the basons: and all these vessels which Hiram made to King Solomon, for the house of the Lord, were of bright brasse.

46 In the plaine of Iordane did the king cast them in the clay ground, betweene Succoth and Zarthan.

47 And Solomon left all the vessels vnweighed, because they were exceeding many: neither was the weight of the brasse found out.

48 And Solomon made all the vessels that pertained vnto the house of the Lord: the Altar of gold, and the table of gold, whereupon the Shewbread was:

49 And the candlesticks of pure gold, fiue on the right side, and fiue on the left, before the Oracle, with the flowers, and the lampes, and the tongs of gold,

Solomon's buildings. (1-12) Furniture of the temple. (13-47) Vessels of gold. (48-51)1-12 All Solomon's buildings, though beautiful, were intended for use. Solomon began with the temple; he built for God first, and then his other buildings. The surest foundations of lasting prosperity are laid in early piety. He was thirteen years building his house, yet he built the temple in little more than seven years; not that he was more exact, but less eager in building his own house, than in building God's. We ought to prefer God's honour before our own ease and satisfaction.

13-47 The two brazen pillars in the porch of the temple, some think, were to teach those that came to worship, to depend upon God only, for strength and establishment in all their religious exercises. "Jachin," God will fix this roving mind. It is good that the heart be established with grace. "Boaz," In him is our strength, who works in us both to will and to do. Spiritual strength and stability are found at the door of God's temple, where we must wait for the gifts of grace, in use of the means of grace. Spiritual priests and spiritual sacrifices must be washed in the laver of Christ's blood, and of regeneration. We must wash often, for we daily contract pollution. There are full means provided for our cleansing; so that if we have our lot for ever among the unclean it will be our own fault. Let us bless God for the fountain opened by the sacrifice of Christ for sin and for uncleanness.

48-51 Christ is now the Temple and the Builder; the Altar and the Sacrifice; the Light of our souls, and the Bread of life; able to supply all the wants of all that have applied or shall apply to him. Outward images cannot represent, words cannot express, the heart cannot conceive, his preciousness or his love. Let us come to him, and wash away our sins in his blood; let us seek for the purifying grace of his Spirit; let us maintain communion with the Father through his intercession, and yield up ourselves and all we have to his service. Being strengthened by him, we shall be accepted, useful, and happy.

View All Discussusion for 1 Kings Chapter 7... 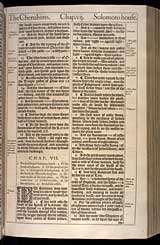