1 And it came to passe in the foure hundred and fourescore yeere after the children of Israel were come out of the land of Egypt, in the fourth yere of Solomons reigne ouer Israel, in the moneth Zif, which is the second moneth, that he began to build the house of the Lord.

2 And the house which king Solomon built for the Lord, the length thereof was threescore cubites, and the breadth thereof twentie cubits, and the height thereof thirtie cubites.

4 And for the house he made windowes of narrow lights.

9 So he built the house and finished it: and couered the house with beams and boards of Cedar.

10 And then hee built chambers against all the house, fiue cubites high: and they rested on the house with timber of Cedar.

11 ¶ And the word of the Lord came to Solomon, saying;

12 Concerning this House which thou art in building, if thou wilt walke in my Statutes, and execute my Iudgments, and keepe all my Commandements to walke in them: then will I performe my word with thee, which I spake vnto Dauid thy father.

13 And I will dwell among the children of Israel, and will not forsake my people Israel.

14 So Solomon built the house, and finished it.

16 And hee built twentie cubites on the sides of the house, both the floore, and the walles with boards of Cedar: he euen built them for it within, euen for the Oracle, euen for the most holy place.

17 And the house, that is, the Temple before it, was fortie cubites long.

18 And the Cedar of the house within was carued with knops, and open flowres: all was Cedar, there was no stone seene.

19 And the Oracle he prepared in the house within, to set there the Arke of the Couenant of the Lord.

21 So Solomon ouerlayd the house within with pure golde: and he made a partition, by the chaines of golde before the Oracle, and he ouerlaid it with gold.

23 ¶ And within the Oracle he made two Cherubims of Oliue tree, each ten cubites high.

25 And the other Cherub was tenne cubites: both the Cherubims were of one measure, and one size.

26 The height of the one Cherub was ten cubites, and so was it of the other Cherub.

28 And he ouerlayd the Cherubims with golde.

29 And he carued all the walles of the house round about with carued figures of Cherubims, and palme trees, and open flowers, within & without.

30 And the floore of the house hee ouerlayed with gold, within and without.

31 ¶ And for the entring of the Oracle he made doores of Oliue tree: the lintell and side posts were a fifth part of the wall.

33 So also made hee for the doore of the Temple postes of Oliue tree a fourth part of the wall.

35 And he carued thereon Cherubims, and palme trees, and open flowers: and couered them with gold, fitted vpon the carued worke.

36 ¶ And hee built the inner Court with three rowes of hewed stone, and a row of Cedar beames.

37 ¶ In the fourth yeere was the foundation of the house of the Lord layd, in the moneth Zif.

38 And in the eleuenth yeere in the moneth Bul (which is the eight moneth) was the house finished throughout all the parts therof, and according to all the fashion of it: So was he seuen yeeres in building it.

The building of Solomon's temple. (1-10) Promise given concerning the temple. (11-14) Particulars respecting the temple. (15-38)1-10 The temple is called the house of the Lord, because it was directed and modelled by him, and was to be employed in his service. This gave it the beauty of holiness, that it was the house of the Lord, which was far beyond all other beauties. It was to be the temple of the God of peace, therefore no iron tool must be heard; quietness and silence suit and help religious exercises. God's work should be done with much care and little noise. Clamour and violence often hinder, but never further the work of God. Thus the kingdom of God in the heart of man grows up in silence, #Mr 5:27|.

11-14 None employ themselves for God, without having his eye upon them. But God plainly let Solomon know that all the charge for building this temple, would neither excuse from obedience to the law of God, nor shelter from his judgments, in case of disobedience.

15-38 See what was typified by this temple. 1. Christ is the true Temple. In him dwells all the fulness of the Godhead; in him meet all God's spiritual Israel; through him we have access with confidence to God. 2. Every believer is a living temple, in whom the Spirit of God dwells, #1Co 3:16|. This living temple is built upon Christ as its Foundation, and will be perfect in due time. 3. The gospel church is the mystical temple. It grows to a holy temple in the Lord, enriched and beautified with the gifts and graces of the Spirit. This temple is built firm, upon a Rock. 4. Heaven is the everlasting temple. There the church will be fixed. All that shall be stones in that building, must, in the present state of preparation, be fitted and made ready for it. Let sinners come to Jesus as the living Foundation, that they may be built on him, a part of this spiritual house, consecrated in body and soul to the glory of God.

View All Discussusion for 1 Kings Chapter 6... 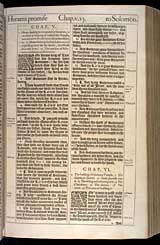