1 And Eliiah the Tishbite, who was of the inhabitants of Gilead, said vnto Ahab, As the Lord God of Israel liueth, before whome I stand, there shall not be deaw nor raine these yeres, but according to my word.

2 And the worde of the Lord came vnto him, saying,

3 Get thee hence, and turne thee Eastward, and hide thy selfe by the brooke Cherith, that is before Iordane.

4 And it shall bee, that thou shalt drinke of the brooke, and I haue commanded the rauens to feed thee there.

5 So hee went, and did according vnto the word of the Lord: for hee went and dwelt by the brooke Cherith, that is before Iordane.

7 And it came to passe after a while, that the brooke dryed vp, because there had beene no raine in the land.

8 ¶ And the word of the Lord came vnto him, saying,

9 Arise, get thee to Zarephath, which belongeth to Zidon, and dwell there: behold, I haue commaunded a widow woman there to sustaine thee.

10 So he arose, and went to Zarephath: and when he came to the gate of the citie, behold, the widow woman was there gathering of stickes: and he called to her, and said, Fetch me, I pray thee, a little water in a vessell, that I may drinke.

11 And as shee was going to fetch it, he called to her, and said, Bring mee, I pray thee, a morsell of bread in thine hand.

12 And she said, As the Lord thy God liueth, I haue not a cake, but an handfull of meale in a barrell, and a little oyle in a cruse: and behold, I am gathering two stickes, that I may goe in, and dresse it for me and my sonne, that we may eate it, and die.

13 And Eliiah said vnto her, Feare not, goe, and doe as thou hast said: but make mee thereof a little cake first, and bring it vnto mee, and after make for thee, and for thy sonne.

14 For thus saith the Lord God of Israel, The barrell of meale shall not waste, neither shall the cruse of oile faile, vntill the day that the Lord sendeth raine vpon the earth.

15 And shee went, and did according to the saying of Eliiah: and she, and he, and her house did eate many dayes.

16 And the barrell of meale wasted not, neither did the cruse of oyle faile, according to the word of the Lord, which he spake by Eliiah.

17 ¶ And it came to passe after these things, that the sonne of the woman, the mistresse of the house, fell sicke, and his sickenesse was so sore, that there was no breath left in him.

18 And shee sayd vnto Eliiah, What haue I to doe with thee? O thou man of God! Art thou come vnto me to call my sinne to remembrance, and to slay my sonne?

19 And he said vnto her, Giue me thy sonne. And he tooke him out of her bosome, and caried him vp into a loft, where he abode, and laide him vpon his owne bed.

20 And hee cried vnto the Lord, and said, O Lord my God, hast thou also brought euill vpon the widow, with whom I soiourne, by slaying her sonne?

21 And he stretched himselfe vpon the child three times, and cried vnto the Lord, and said; O Lord my God, I pray thee, let this childes soule come into him againe.

22 And the Lord heard the voice of Eliiah, and the soule of the child came into him againe, and he reuiued.

23 And Eliiah tooke the childe, and brought him downe out of the chamber into the house, and deliuered him vnto his mother: and Eliiah said, See, thy sonne liueth.

24 ¶ And the woman said to Eliiah, Now by this I know, that thou art a man of God, and that the word of the Lord in thy mouth is trueth.

Elijah fed by ravens. (1-7) Elijah sent to Zarephath. (8-16) Elijah raises the widow's son to life. (17-24)1-7 God wonderfully suits men to the work he designs them for. The times were fit for an Elijah; an Elijah was fit for them. The Spirit of the Lord knows how to fit men for the occasions. Elijah let Ahab know that God was displeased with the idolaters, and would chastise them by the want of rain, which it was not in the power of the gods they served to bestow. Elijah was commanded to hide himself. If Providence calls us to solitude and retirement, it becomes us to go: when we cannot be useful, we must be patient; and when we cannot work for God, we must sit still quietly for him. The ravens were appointed to bring him meat, and did so. Let those who have but from hand to mouth, learn to live upon Providence, and trust it for the bread of the day, in the day. God could have sent angels to minister to him; but he chose to show that he can serve his own purposes by the meanest creatures, as effectually as by the mightiest. Elijah seems to have continued thus above a year. The natural supply of water, which came by common providence, failed; but the miraculous supply of food, made sure to him by promise, failed not. If the heavens fail, the earth fails of course; such are all our creature-comforts: we lose them when we most need them, like brooks in summer. But there is a river which makes glad the city of God, that never runs dry, a well of water that springs up to eternal life. Lord, give us that living water!

8-16 Many widows were in Israel in the days of Elias, and some, it is likely, would have bidden him welcome to their houses; yet he is sent to honour and bless with his presence a city of Sidon, a Gentile city, and so becomes the first prophet of the Gentiles. Jezebel was Elijah's greatest enemy; yet, to show her how powerless was her malice, God will find a hiding-place for him even in her own country. The person appointed to entertain Elijah is not one of the rich or great men of Sidon; but a poor widow woman, in want, and desolate, is made both able and willing to sustain him. It is God's way, and it is his glory, to make use of, and put honour upon, the weak and foolish things of the world. O woman, great was thy faith; one has not found the like, no not in Israel. She took the prophet's word, that she should not lose by it. Those who can venture upon the promise of God, will make no difficulty to expose and empty themselves in his service, by giving him his part first. Surely the increase of this widow's faith, so as to enable her thus readily to deny herself, and to depend upon the Divine promise, was as great a miracle in the kingdom of grace, as the increase of her meal and oil in the kingdom of providence. Happy are all who can thus, against hope, believe and obey in hope. One poor meal's meat this poor widow gave the prophet; in recompence of it, she and her son did eat above two years, in a time of famine. To have food from God's special favour, and in such good company as Elijah, made it more than doubly sweet. It is promised to those who trust in God, that they shall not be ashamed in evil time; in days of famine they shall be satisfied.

17-24 Neither faith nor obedience shut out afflictions and death. The child being dead, the mother spake to the prophet, rather to give vent to her sorrow, than in hope of relief. When God removes our comforts from us, he remembers our sins against us, perhaps the sins of our youth, though long since past. When God remembers our sins against us, he designs to teach us to remember them against ourselves, and to repent of them. Elijah's prayer was doubtless directed by the Holy Spirit. The child revived. See the power of prayer, and the power of Him who hears prayer.

View All Discussusion for 1 Kings Chapter 17... 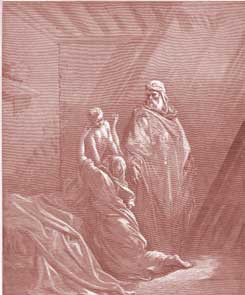 Elijah Raises the Son of the Widow of Zarephath 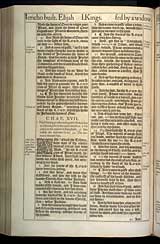