1 Now cōcerning the things wherof ye wrote vnto me, It is good for a man not to touch a woman.

5 Defraud you not one the other, except it bee with consent for a time, that yee may giue your selues to fasting and prayer, and come together againe, that Satan tempt you not for your incontinencie.

6 But I speake this by permission, and not of commandement.

7 For I would that all men were euen as I my selfe: but euery man hath his proper gift of God, one after this maner, and another after that.

8 I say therefore to the vnmaried and widowes, It is good for them if they abide euen as I.

9 But if they cannot conteine, let them marry: for it is better to marrie then to burne.

10 And vnto the married, I command, yet not I, but the Lord, Let not the wife depart from her husband:

11 But and if shee depart, let her remaine vnmaried, or be reconciled to her husband: and let not the husband put away his wife.

12 But to the rest speake I, not the Lord, If any brother hath a wife that beleeueth not, and shee bee pleased to dwell with him, let him not put her away.

13 And the woman which hath an husband that beleeueth not, and if hee be pleased to dwell with her, let her not leaue him.

15 But if the vnbeleeuing depart, let him depart. A brother or a sister is not vnder bondage in such cases: but God hath called vs to peace.

17 But as God hath distributed to euery man, as the Lord hath called euery one, so let him walke, and so ordeine I in all Churches.

20 Let euery man abide in the same calling wherein he was called.

21 Art thou called being a seruant? care not for it: but if thou maist be made free, vse it rather.

23 Ye are bought with a price, be not ye the seruants of men.

25 Nowe concerning virgins, I haue no commaundement of the Lord: yet I giue my iudgement as one that hath obtained mercy of the Lord to be faithfull.

26 I suppose therefore that this is good for the present distresse, I say, that it is good for a man so to be.

28 But and if thou marry, thou hast not sinned, and if a virgin marry, shee hath not sinned: neuerthelesse, such shall haue trouble in the flesh: but I spare you.

29 But this I say, brethren, the time is short. It remaineth, that both they that haue wiues, be as though they had none:

31 And they that vse this world, as not abusing it: for the fashion of this world passeth away.

32 But I would haue you without carefulnesse. He that is vnmarried, careth for the things that belōgeth to the Lord, how he may please the Lord:

33 But hee that is maried, careth for the things that are of the world, how he may please his wife.

35 And this I speake for your owne profite, not that I may cast a snare vpon you, but for that which is comely, and that you may attend vpon the Lord without distraction.

36 But if any man thinke that he behaueth himselfe vncomely toward his virgin, if she passe the floure of her age, and neede so require, let him doe what hee will, hee sinneth not: let them marry.

37 Neuerthelesse, hee that standeth stedfast in his heart, hauing no necessitie, but hath power ouer his owne will, and hath so decreed in his heart that he will keepe his virgin, doeth well.

39 The wife is bound by the Lawe as long as her husband liueth: but if her husband bee dead, shee is at liberty to bee maried to whom shee will, onely in the Lord.

40 But shee is happier if shee sobide, after my iudgment: and I thinke also that I haue the Spirit of God.

The apostle answers several questions about marriage. (1-9) Married Christians should not seek to part from their unbelieving consorts. (10-16) Persons, in any fixed station, should usually abide in that. (17-24) It was most desirable, on account of the then perilous days, for people to sit loose to this world. (25-35) Great prudence be used in marriage; it should be only in the Lord. (36-40)1-9 The apostle tells the Corinthians that it was good, in that juncture of time, for Christians to keep themselves single. Yet he says that marriage, and the comforts of that state, are settled by Divine wisdom. Though none may break the law of God, yet that perfect rule leaves men at liberty to serve him in the way most suited to their powers and circumstances, of which others often are very unfit judges. All must determine for themselves, seeking counsel from God how they ought to act.

10-16 Man and wife must not separate for any other cause than what Christ allows. Divorce, at that time, was very common among both Jews and Gentiles, on very slight pretexts. Marriage is a Divine institution; and is an engagement for life, by God's appointment. We are bound, as much as in us lies, to live peaceably with all men, #Ro 12:18|, therefore to promote the peace and comfort of our nearest relatives, though unbelievers. It should be the labour and study of those who are married, to make each other as easy and happy as possible. Should a Christian desert a husband or wife, when there is opportunity to give the greatest proof of love? Stay, and labour heartily for the conversion of thy relative. In every state and relation the Lord has called us to peace; and every thing should be done to promote harmony, as far as truth and holiness will permit.

17-24 The rules of Christianity reach every condition; and in every state a man may live so as to be a credit to it. It is the duty of every Christian to be content with his lot, and to conduct himself in his rank and place as becomes a Christian. Our comfort and happiness depend on what we are to Christ, not what we are in the world. No man should think to make his faith or religion, an argument to break through any natural or civil obligations. He should quietly and contentedly abide in the condition in which he is placed by Divine Providence.

25-35 Considering the distress of those times, the unmarried state was best. Notwithstanding, the apostle does not condemn marriage. How opposite are those to the apostle Paul who forbid many to marry, and entangle them with vows to remain single, whether they ought to do so or not! He exhorts all Christians to holy indifference toward the world. As to relations; they must not set their hearts on the comforts of the state. As to afflictions; they must not indulge the sorrow of the world: even in sorrow the heart may be joyful. As to worldly enjoyments; here is not their rest. As to worldly employment; those that prosper in trade, and increase in wealth, should hold their possessions as though they held them not. As to all worldly concerns; they must keep the world out of their hearts, that they may not abuse it when they have it in their hands. All worldly things are show; nothing solid. All will be quickly gone. Wise concern about worldly interests is a duty; but to be full of care, to have anxious and perplexing care, is a sin. By this maxim the apostle solves the case whether it were advisable to marry. That condition of life is best for every man, which is best for his soul, and keeps him most clear of the cares and snares of the world. Let us reflect on the advantages and snares of our own condition in life; that we may improve the one, and escape as far as possible all injury from the other. And whatever cares press upon the mind, let time still be kept for the things of the Lord.

36-40 The apostle is thought to give advice here about the disposal of children in marriage. In this view, the general meaning is plain. Children should seek and follow the directions of their parents as to marriage. And parents should consult their children's wishes; and not reckon they have power to do with them, and dictate just as they please, without reason. The whole is closed with advice to widows. Second marriages are not unlawful, so that it is kept in mind, to marry in the Lord. In our choice of relations, and change of conditions, we should always be guided by the fear of God, and the laws of God, and act in dependence on the providence of God. Change of condition ought only to be made after careful consideration, and on probable grounds, that it will be to advantage in our spiritual concerns.

View All Discussusion for 1 Corinthians Chapter 7... 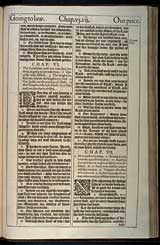