1 Moreouer brethren, I would not that yee should be ignorant, how that all our fathers were vnder the cloud, and all passed thorow the Sea:

2 And were all baptized vnto Moyses in the cloud, and in the sea:

3 And did all eat the same spirituall meat:

4 And did all drinke the same spirituall drinke: (for they dranke of that spirituall Rocke that followed them: and that Rocke was Christ)

5 But with many of them God was not well pleased: for they were ouerthrowen in the wildernesse.

6 Now these things were our examples, to the intent wee should not lust after euil things, as they also lusted.

7 Neither be ye idolaters, as were some of them, as it is written, The people sate downe to eate and drinke, and rose vp to play.

8 Neither let vs commit fornication, as some of them committed, and fell in one day three and twentie thousand.

9 Neither let vs tempt Christ, as some of them also tempted, and were destroyed of serpents.

10 Neither murmure ye, as some of them also murmured, and were destroyed of the destroyer.

11 Now all these things happened vnto them for ensamples: and they are written for our admonition, vpon whom the ends of the world are come.

12 Wherefore, let him that thinketh he standeth, take heed lest he fall.

13 There hath no temptation taken you, but such as is common to man: but God is faithfull, who wil not suffer you to bee tempted aboue that you are able: but will with the temptation also make a way to escape, that ye may bee able to beare it.

17 For we being many are one bread, and one body: for we are all partakers of that one bread.

18 Behold Israel after the flesh: are not they which eat of the sacrifices, partakers of the Altar?

19 What say I then? that the idole is any thing? or that which is offered in sacrifice to idols is any thing?

20 But I say that the things which the Gentiles sacrifice, they sacrifice to deuils, and not to God: and I would not that yee should haue fellowship with deuils.

22 Doe we prouoke the Lord to iealousie? are we stronger then he?

25 Whatsoeuer is solde in the shambles, that eate, asking no question for conscience sake.

26 For the earth is the Lords, and the fulnesse thereof.

27 If any of them that beleeue not, bid you to a feast, and yee be disposed to goe, whatsoeuer is set before you, eate, asking no question for conscience sake.

28 But if any man say vnto you, This is offered in sacrifice vnto idoles, eate not for his sake that shewed it, and for conscience sake. The earth is the Lords, and the fulnesse thereof.

29 Conscience I say, not thine owne, but of the others: for why is my libertie iudged of another mans conscience?

30 For, if I by grace be a partaker, why am I euill spoken of, for that for which I giue thankes?

31 Whether therfore ye eat or drinke, or whatsoeuer ye doe, doe all to the glory of God.

33 Euen as I please all men in all things, not seeking mine owne profit, but the profit of many, that they may be saued.

The great privileges, and yet terrible overthrow of the Israelites in the wilderness. (1-5) Cautions against all idolatrous, and other sinful practices. (6-14) The partaking in idolatry cannot exist with having communion with Christ. (15-22) All we do to be to the glory of God, and without offence to the consciences of others. (23-33)1-5 To dissuade the Corinthians from communion with idolaters, and security in any sinful course, the apostle sets before them the example of the Jewish nation of old. They were, by a miracle, led through the Red Sea, where the pursuing Egyptians were drowned. It was to them a typical baptism. The manna on which they fed was a type of Christ crucified, the Bread which came down from heaven, which whoso eateth shall live for ever. Christ is the Rock on which the Christian church is built; and of the streams that issue therefrom, all believers drink, and are refreshed. It typified the sacred influences of the Holy Spirit, as given to believers through Christ. But let none presume upon their great privileges, or profession of the truth; these will not secure heavenly happiness.

6-14 Carnal desires gain strength by indulgence, therefore should be checked in their first rise. Let us fear the sins of Israel, if we would shun their plagues. And it is but just to fear, that such as tempt Christ, will be left by him in the power of the old serpent. Murmuring against God's disposals and commands, greatly provokes him. Nothing in Scripture is written in vain; and it is our wisdom and duty to learn from it. Others have fallen, and so may we. The Christian's security against sin is distrust of himself. God has not promised to keep us from falling, if we do not look to ourselves. To this word of caution, a word of comfort is added. Others have the like burdens, and the like temptations: what they bear up under, and break through, we may also. God is wise as well as faithful, and will make our burdens according to our strength. He knows what we can bear. He will make a way to escape; he will deliver either from the trial itself, or at least the mischief of it. We have full encouragement to flee from sin, and to be faithful to God. We cannot fall by temptation, if we cleave fast to him. Whether the world smiles or frowns, it is an enemy; but believers shall be strengthened to overcome it, with all its terrors and enticements. The fear of the Lord, put into their hearts, will be the great means of safety.

15-22 Did not the joining in the Lord's supper show a profession of faith in Christ crucified, and of adoring gratitude to him for his salvation ? Christians, by this ordinance, and the faith therein professed, were united as the grains of wheat in one loaf of bread, or as the members in the human body, seeing they were all united to Christ, and had fellowship with him and one another. This is confirmed from the Jewish worship and customs in sacrifice. The apostle applies this to feasting with idolaters. Eating food as part of a heathen sacrifice, was worshipping the idol to whom it was made, and having fellowship or communion with it; just as he who eats the Lord's supper, is accounted to partake in the Christian sacrifice, or as they who ate the Jewish sacrifices partook of what was offered on their altar. It was denying Christianity; for communion with Christ, and communion with devils, could never be had at once. If Christians venture into places, and join in sacrifices to the lust of the flesh, the lust of the eye, and the pride of life, they will provoke God.

23-33 There were cases wherein Christians might eat what had been offered to idols, without sin. Such as when the flesh was sold in the market as common food, for the priest to whom it had been given. But a Christian must not merely consider what is lawful, but what is expedient, and to edify others. Christianity by no means forbids the common offices of kindness, or allows uncourteous behaviour to any, however they may differ from us in religious sentiments or practices. But this is not to be understood of religious festivals, partaking in idolatrous worship. According to this advice of the apostle, Christians should take care not to use their liberty to the hurt of others, or to their own reproach. In eating and drinking, and in all we do, we should aim at the glory of God, at pleasing and honouring him. This is the great end of all religion, and directs us where express rules are wanting. A holy, peaceable, and benevolent spirit, will disarm the greatest enemies.

View All Discussusion for 1 Corinthians Chapter 10... 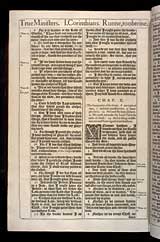