1 Concerning the diuisions of the porters: of the Korhites was Meshelemiah the sonne of Kore, of the sonnes of Asaph.

2 And the sonnes of Meshelemiah were Zechariah the first borne, Iediael the second, Zebadiah the third, Iathniel the fourth,

4 Moreouer the sonnes of Obed-Edom were Shemaiah the first borne, Iehozabad the second, Ioah the thirde, and Sacar the fourth, and Nethaneel the fifth.

5 Ammiel the sixth, Issachar the seuenth, Peulthai the eighth: for God blessed him.

6 Also vnto Shemaiah his sonne were sonnes borne, that ruled throughout the house of their father: for they were mighty men of valour.

7 The sonnes of Shemaiah: Othni, and Rephael, and Obed, Elzabad, whose brethren were strong men; Elihu, and Semachiah.

8 All these of the sonnes of Obed-Edom: they and their sonnes and their brethren, able men for strength for the seruice, were threescore and two of Obed-Edom.

9 And Meshelemiah had sonnes and brethren, strong men, eighteene.

10 Also Hosah of the children of Merari, had sonnes: Simri the chiefe, (for though he was not the first borne, yet his father made him the chiefe)

11 Hilkiah the second, Tebaliah the thirde, Zechariah the fourth: all the sonnes and brethren of Hosah, were thirteene.

12 Among these were the diuisions of the porters, euen among the chiefe men, hauing wards one against another, to minister in the house of the Lord.

13 ¶ And they cast lots as well the small as the great, according to the house of their fathers for euery gate.

14 And the lot Eastward fel to Shelemiah; then for Zechariah his sonne (a wise counseller:) they cast lots, and his lot came out Northward.

15 To Obed-Edom Southward, and to his sonnes, the house of Asuppim.

16 To Shuppim and Hosa, the lot came foorth Westward with the gate Shallecheth, by the causey of the going vp, ward against ward.

18 And Parbar Westward, foure at the causey, and two at Parbar.

22 The sonnes of Iehieli, Zetham and Ioel his brother, which were ouer the treasures of the house of the Lord.

26 Which Shelomith and his brethren, were ouer all the treasures of the dedicate things, which Dauid the king and the chiefe fathers, the captaines ouer thousands and hundreds, and the captaines of the hoste had dedicated.

27 Out of the spoyles wonne in battels, did they dedicate to maintaine the house of the Lord.

29 ¶ Of the Izharites, Chenaniah and his sonnes, were for the outward busines ouer Israel, for officers and Iudges.

30 And of the Hebronits, Hashabiah and his brethren, men of valour, a thousand and seuen hundred, were officers among them of Israel on this side Iorden westward, in all busines of the Lord, and in the seruice of the king.

31 Among the Hebronites was Ieriiah the chiefe, euen among the Hebronits, according to the generations of his fathers: in the fourtieth yeere of the reigne of Dauid, they were sought for, and there were found among them mightie men of valour, at Iazer of Gilead.

32 And his brethren, men of valour, were two thousand and seuen hundred chiefe fathers, whom King Dauid made rulers ouer the Reubenites, the Gadites, & the halfe tribe of Manasseh, for euery matter perteining to God, and affaires of the king.

The offices of the Levites.

- The porters and treasurers of the temple, had occasion for strength and valour to oppose those who wrongly attempted to enter the sanctuary, and to guard the sacred treasures. Much was expended daily upon the altar; flour, wine, oil, salt, fuel, beside the lamps; quantities of these were kept beforehand, besides the sacred vestments and utensils. These were the treasures of the house of God. These treasures typified the plenty there is in our heavenly Father's house, enough and to spare. From those sacred treasuries, the unsearchable riches of Christ, all our wants are supplied; and receiving from his fulness, we must give him the glory, and endeavour to dispose of our abilities and substance according to his will. We have an account of those employed as officers and judges. The magistracy is an ordinance of God for the good of the church, as truly as the ministry, and must not be neglected. None of the Levites who were employed in the service of the sanctuary, none of the singers or porters, were concerned in this outward business; one duty was enough to engage the whole man. Wisdom, courage, strength of faith, holy affections, and constancy of mind in doing our duty, are requisite or useful for every station.

View All Discussusion for 1 Chronicles Chapter 26... 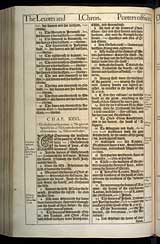