1 Then all Israel gathered themselues to Dauid vnHebron, saying, Behold, wee are thy bone and thy flesh.

2 And moreouer in time past, euen when Saul was king, thou wast he that leddest out and broughtest in Israel: and the Lord thy God said vnto thee, Thou shalt feede my people Israel, and thou shalt be ruler ouer my people Israel.

3 Therefore came all the Elders of Israel to the king to Hebron, and Dauid made a couenant with them in Hebron before the Lord, and they annointed Dauid king ouer Israel, according to the word of the Lord, by Samuel.

4 ¶ And Dauid & all Israel, went to Ierusalem, which is Iebus, where the Iebusites were the inhabitants of the land.

5 And the inhabitants of Iebus said to Dauid, Thou shalt not come hither. Neuerthelesse Dauid tooke the castle of Zion, which is the citie of Dauid.

6 And Dauid said, Whosoeuer smiteth the Iebusites first, shall be chiefe, and captaine. So Ioab the sonne of Zeruiah went first vp, and was chiefe.

7 And Dauid dwelt in the castell: therefore they called it the citie of Dauid.

8 And he built the citie round about, euen from Millo round about: and Ioab repaired the rest of the citie.

9 So Dauid waxed greater and greater: for the Lord of hostes was with him.

10 ¶ These also are the chiefe of the mightie men, whom Dauid had, who strenthened themselues with him in his kingdome, and with all Israel, to make him king according to the word of the Lord, concerning Israel.

11 And this is the number of the mightie men, whom Dauid had: Iashobeam an Hachmonite, the chiefe of the captaines: he lift vp his speare against three hundred, slaine by him at one time.

12 And after him was Eleazar the sonne of Dodo the Ahohite, who was one of the three mighties.

13 He was with Dauid at Pasdammim; and there the Philistines were gathered together to battell, where was a parcell of ground full of barley, and the people fled from before the Philistines.

14 And they set themselues in the middest of that parcell, and deliuered it, and slue the Philistines, & the Lord saued them by a great deliuerance.

15 ¶ Now three of the thirtie captaines, went downe to the rocke of Dauid, into the caue of Adullam, and the host of the Philistines encamped in the valley of Rephaim.

16 And Dauid was then in the hold, and the Philistines garison was then at Bethlehem.

17 And Dauid longed and said, Oh that one would giue me drinke of the water of the well of Bethlehem, that is at the gate.

18 And the three brake through the host of the Philistines, and drew water out of the well of Bethlehem, that was by the gate, and tooke it and brought it to Dauid. But Dauid would not drink of it, but powred it out to the Lord,

19 And said, My God forbid it mee, that I should doe this thing. Shall I drinke the blood of these men, that haue put their liues in ieopardie? for with the ieopardie of their liues, they brought it: therfore he would not drink it. These things did these three mightiest.

20 ¶ And Abishai the brother of Ioab, he was chiefe of the three. For lifting vp his speare against three hundred, he slew them, and had a name among the three.

21 Of the three, hee was more honourable then the two, for he was their captaine; howbeit, he attained not to the first three.

22 Benaiah the sonne of Iehoiada, the sonne of a valiant man of Kabzeel, who had done many acts: he slue two Lyon-like men of Moab, also he went downe and slue a Lyon in a pit in a snowy day.

23 And he slue an Egyptian, a man of great stature, fiue cubits high, and in the Egyptians hand was a speare like a weauers beame: and he went downe to him with a staffe, and pluckt the speare out of the Egyptians hand, and slue him with his owne speare.

24 These things did Benaiah the sonne of Iehoiada, and had the name among the three mighties.

25 Behold, hee was honourable among the thirtie, but attained not to the first three: and Dauid set him ouer his guard.

26 ¶ Also the valiant men of the armies were Asahel the brother of Ioab, Elhanan the sonne of Dodo of Bethlehem.

27 Shammoth the Harorite, Helez the Pelonite,

28 Ira the sonne of Ikkesh the Tekoite, Abiezer the Antothite,

29 Sibbecai the Hushathite, Ilai the Ahohite,

31 Ithai the sonne of Ribai of Gibeah, that perteined to the children of Beniamin, Benaiah the Pirathonite,

32 Hurai of the brookes of Gaash, Abiel the Arbathite,

34 The sonnes of Hashem the Gizonite: Ionathan the sonne of Shageh the Hararite,

36 Hepher the Mecherathite, Ahiiah the Pelonite,

37 Hezro the Carmelite, Naarai the sonne of Ezbai,

38 Ioel the brother of Nathan, Mibhar the sonne of Haggeri,

39 Zelek the Ammonite, Naharai the Berothite, the armour bearer of Ioab the sonne of Zeruiah,

41 Uriah the Hittite, Zabad the sonne of Ahlai,

43 Hanan the sonne of Maacah, and Ioshaphat the Mithnite,

44 Uzzia the Ashterathite, Shama and Iehiel the sonnes of Hothan the Aroerite,

45 Iediael the sonne of Zimri, and Ioha his brother, the Tizite,

47 Eliel, and Obed, and Iasiel the Mesobaite.

David raised to the throne. (1-9) A list of David's mighty men. (10-47)1-9 David was brought to possess the throne of Israel after he had reigned seven years in Hebron, over Judah only. God's counsels will be fulfilled at last, whatever difficulties lie in the way. The way to be truly great, is to be really useful, to devote all our talents to the Lord.

10-47 An account is given of David's worthies, the great men who served him. Yet David reckoned his success, not as from the mighty men that were with him, but from the mighty God, whose presence is all in all. In strengthening him, they strengthened themselves and their own interest, for his advancement was theirs. We shall gain by what we do in our places for the support of the kingdom of the Son of David; and those that are faithful to Him, shall find their names registered much more to their honour, than these are in the records of fame.

View All Discussusion for 1 Chronicles Chapter 11... 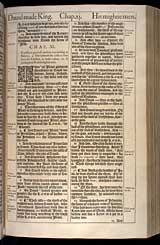