3 And the battell went sore against Saul, and the archers hit him, and he was wounded of the archers.

5 And when his armour bearer saw that Saul was dead, hee fell likewise on the sword, and died.

6 So Saul died, and his three sonnes, and all his house died together.

7 And when all the men of Israel that were in the valley, saw that they fled, and that Saul and his sonnes were dead: then they forsooke their cities, and fled, and the Philistines came and dwelt in them.

8 ¶ And it came to passe on the morrow, when the Philistines came to strip the slaine, that they found Saul and his sonnes fallen in mount Gilboa.

9 And when they had stripped him, they tooke his head, and his armour, and sent into the land of the Philistines round about, to cary tidings vnto their idoles, and to the people.

10 And they put his armour in the house of their gods, and fastened his head in the temple of Dagon.

11 ¶ And when all Iabesh Gilead heard all that the Philistines had done to Saul:

12 They arose, all the valiant men, and tooke away the body of Saul, and the bodies of his sonnes, and brought them to Iabesh, and buried their bones vnder the oke in Iabesh, and fasted seuen dayes.

13 ¶ So Saul died for his transgression which hee committed against the Lord, euen against the word of the Lord which he kept not, and also for asking counsel of one that had a familiar spirit, to enquire of it:

14 And enquired not of the Lord: therefore he slew him, and turned the kingdome vnto Dauid the sonne of Iesse.

The death of Saul.

- The design chiefly in view in these books of the Chronicles, appears to be to preserve the records of the house of David. Therefore the writer repeats not the history of Saul's reign, but only of his death, by which a way was made for David to the throne. And from the ruin of Saul, we may learn, 1. That the sin of sinners will certainly find them out, sooner or later; Saul died for his transgression. 2. That no man's greatness can exempt him from the judgments of God. 3. Disobedience is a killing thing. Saul died for not keeping the word of the Lord. May be delivered from unbelief, impatience, and despair. By waiting on the Lord we shall obtain a kingdom that cannot be moved.

View All Discussusion for 1 Chronicles Chapter 10... 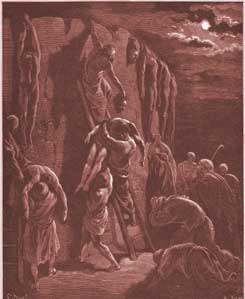 Jabesh-Gileadites Recover the Bodies of Saul and His Sons 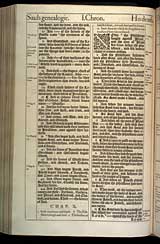