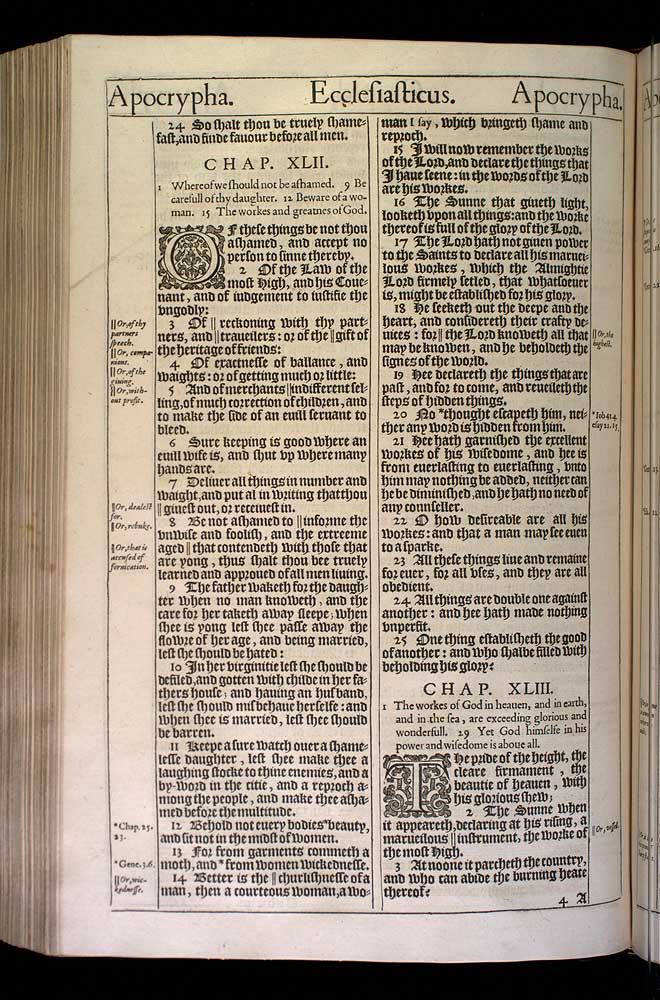 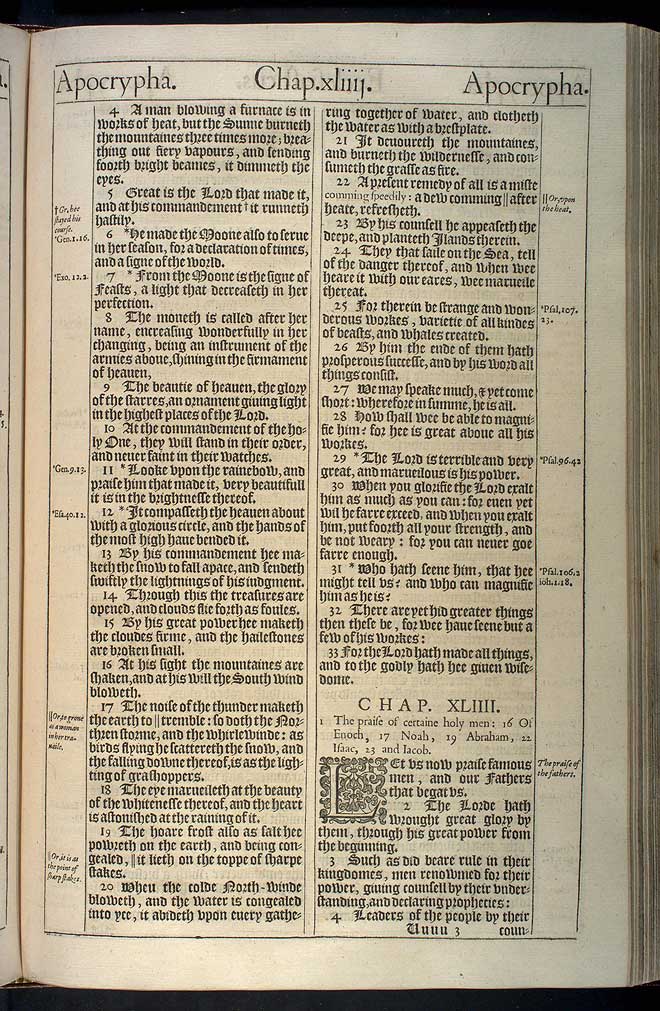 View this Ecclesiasticus chapter 43 scan at a larger size

1 The workes of God in heauen, and in earth, and in the sea, are exceeding glorious and wonderfull. 29 Yet God himselfe in his power and wisedome is aboue all.

1 The pride of the height, the cleare firmament, the beautie of heauen, with his glorious shew;

2 The Sunne when it appeareth, declaring at his rising, a marueilous instrument, the worke of the most High.2

3 At noone it parcheth the country, and who can abide the burning heate thereof?

4 A man blowing a furnace is in works of heat, but the Sunne burneth the mountaines three times more; breathing out fiery vapours, and sending foorth bright beames, it dimmeth the eyes.

5 Great is the Lord that made it, and at his commandement it runneth hastily.5

6 He made the Moone also to serue in her season, for a declaration of times, and a signe of the world.6

7 From the Moone is the signe of Feasts, a light that decreaseth in her perfection.7

8 The moneth is called after her name, encreasing wonderfully in her changing, being an instrument of the armies aboue, shining in the firmament of heauen,

9 The beautie of heauen, the glory of the starres, an ornament giuing light in the highest places of the Lord.

10 At the commandement of the holy One, they will stand in their order, and neuer faint in their watches.

11 Looke vpon the rainebow, and praise him that made it, very beautifull it is in the brightnesse thereof.11

12 It compasseth the heauen about with a glorious circle, and the hands of the most high haue bended it.12

13 By his commandement hee maketh the snow to fall apace, and sendeth swiftly the lightnings of his iudgment.

14 Through this the treasures are opened, and clouds flie forth as foules.

15 By his great power hee maketh the cloudes firme, and the hailestones are broken small.

16 At his sight the mountaines are shaken, and at his will the South wind bloweth.

17 The noise of the thunder maketh the earth to tremble: so doth the Northren storme, and the whirlewinde: as birds flying he scattereth the snow, and the falling downe thereof, is as the lighting of grashoppers.17

18 The eye marueileth at the beauty of the whitenesse thereof, and the heart is astonished at the raining of it.

19 The hoare frost also as salt hee powreth on the earth, and being congealed, it lieth on the toppe of sharpe stakes.19

20 Wheu the colde North-winde bloweth, and the water is congealed into yce, it abideth vpon euery gathering together of water, and clotheth the water as with a brestplate.

21 It deuoureth the mountaines, and burneth the wildernesse, and consumeth the grasse as fire.

22 A present remedy of all is a miste comming speedily: a dew comming after heate, refresheth.22

23 By his counsell he appeaseth the deepe, and planteth Ilands therein.

24 They that saile on the Sea, tell of the danger thereof, and when wee heare it with our eares, wee marueile thereat.

25 For therein be strange and wonderous workes, varietie of all kindes of beasts, and whales created.25

26 By him the ende of them hath prosperous successe, and by his word all things consist.

27 We may speake much, & yet come short: wherefore in summe, he is all.

28 How shall wee be able to magnifie him? for hee is great aboue all his workes.

29 The Lord is terrible and very great, and marueilous is his power.29

30 When you glorifie the Lord exalt him as much as you can: for euen yet wil he farre exceed, and when you exalt him, put foorth all your strength, and be not weary: for you can neuer goe farre enough.

31 Who hath seene him, that hee might tell vs? and who can magnifie him as he is?31

32 There are yet hid greater things then these be, for wee haue seene but a few of his workes:

33 For the Lord hath made all things, and to the godly hath hee giuen wisedome.