1 Now these were the sonnes of Dauid, which were borne vnto him in Hebron. The first borne Amnon, of Ahinoam the Iesreelitesse: the second Daniel, of Abigail the Carmelitesse:

2 The third, Absalom the sonne of Maacha, the daughter of Talmai king of Geshur: the fourth, Adoniah the sonne of Haggith:

3 The fifth, Shephatia of Abital: the sixth, Ithream by Eglah his wife.

4 These sixe were borne vnto him in Hebron, and there hee reigned seuen yeeres, and sixe moneths: and in Ierusalem he reigned thirty and three yeres.

5 And these were borne vnto him in Ierusalem. Shimea, and Shobab, and Nathan, and Solomon, foure, of Bathshua the daughter of Ammiel.

6 Ibhar also, and Elishama, and Eliphelet,

7 And Noga, and Nepheg, and Iaphia,

8 And Elishama, and Eliada, and Eliphelet, nine.

10 ¶ And Solomons sonne was Rehoboam: Abia his sonne: Asa his son: Iehoshaphat his sonne:

14 Amon his sonne: Iosiah his sonne.

15 And the sonnes of Iosiah were: the first borne Iohanan, the second Ioakim, the third Zedekiah, the fourth Sallum.

17 ¶ And the sonnes of Ieconiah, Assir, Salathiel his sonne,

23 And the sonnes of Neariah: Elioenai, and Hezekiah, and Azrikam, three.

24 And the sonnes of Elioenai, were: Hodaiah, and Eliashib, and Pelaiah, and Akkub, and Iohanan, and Dalaiah, and Anani, seuen.

- Of all the families of Israel, none were so illustrious as the family of David: here we have a full account of it. From this family, as concerning the flesh, Christ came. The attentive observer will perceive that the children of the righteous enjoy many advantages.

View All Discussusion for 1 Chronicles Chapter 3... 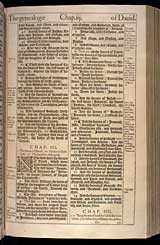