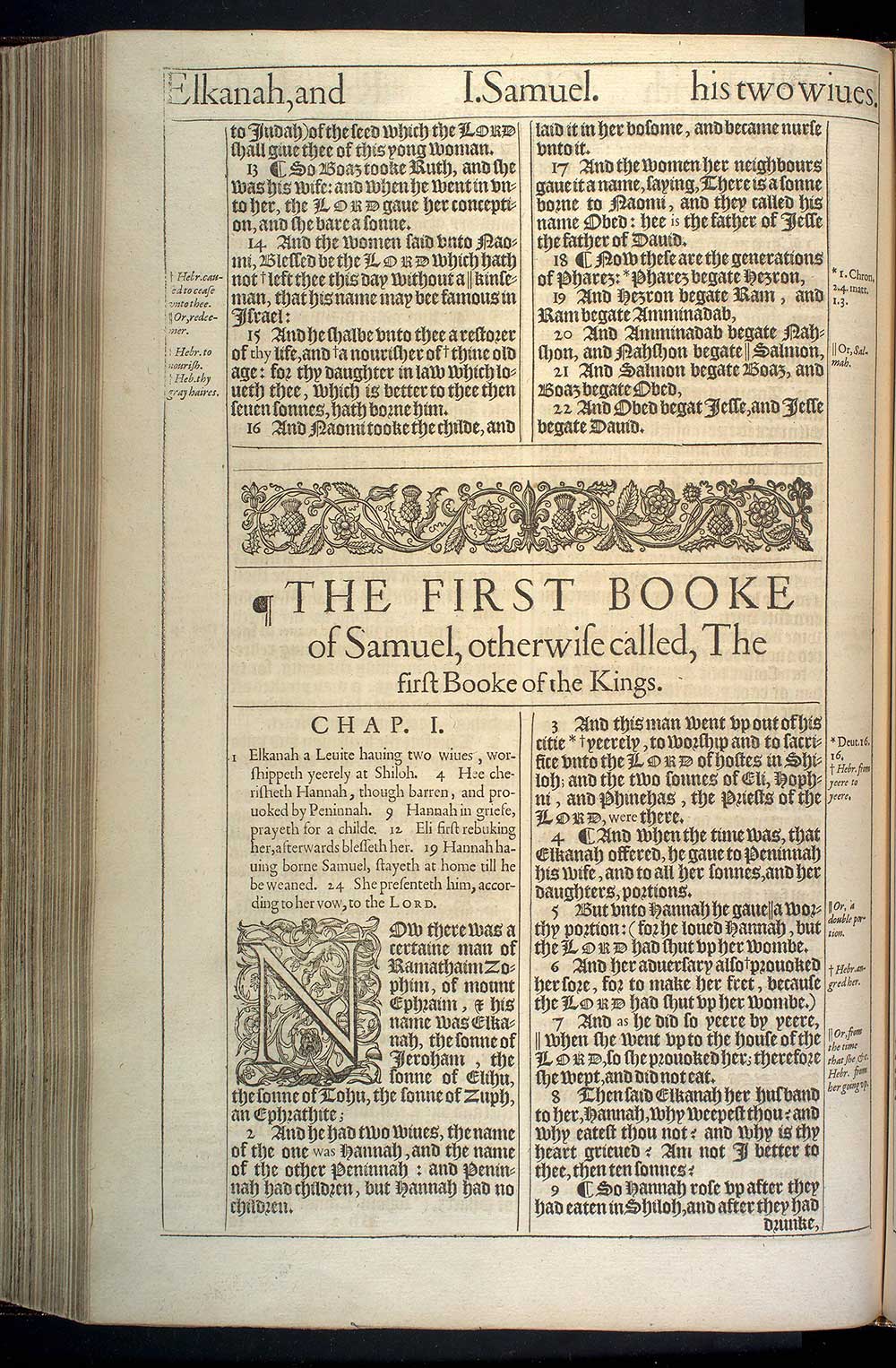 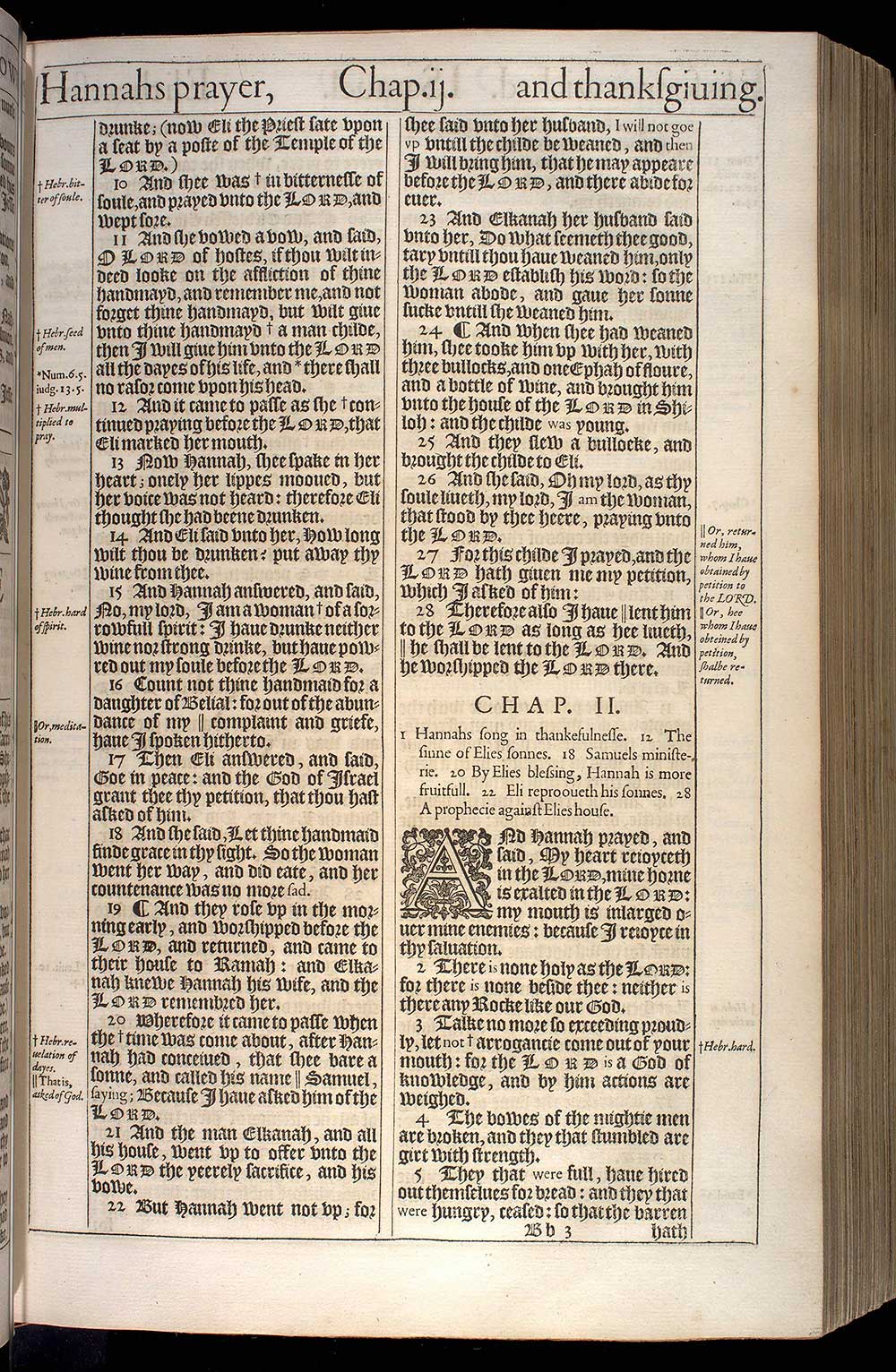 1 Elkanah a Leuite hauing two wiues, worshippeth yeerely at Shiloh. 4 Hee cherisheth Hannah, though barren, and prouoked by Peninnah. 9 Hannah in griefe, prayeth for a childe. 12 Eli first rebuking her, afterwards blesseth her. 19 Hannah hauing borne Samuel, stayeth at home till he be weaned. 24 She presenteth him, according to her vow, to the Lord.

3And this man went vp out of his citie yeerely, to worship and to sacrifice vnto the Lord of hostes in Shiloh; and the two sonnes of Eli, Hophni, and Phinehas, the Priests of the Lord, were there.3

4¶ And when the time was, that Elkanah offered, he gaue to Peninnah his wife, and to all her sonnes, and her daughters, portions.

5But vnto Hannah he gaue a worthy portion: (for he loued Hannah, but the Lord had shut vp her wombe.5

6And her aduersary also prouoked her sore, for to make her fret, because the Lord had shut vp her wombe.)6

7And as he did so yeere by yeere, when she went vp to the house of the Lord, so she prouoked her; therefore she wept, and did not eat.7

8Then said Elkanah her husband to her, Hannah, why weepest thou? and why eatest thou not? and why is thy heart grieued? Am not I better to thee, then ten sonnes?

9¶ So Hannah rose vp after they had eaten in Shiloh, and after they had drunke; (now Eli the Priest sate vpon a seat by a poste of the Temple of the Lord. )

10And shee was in bitternesse of soule, and prayed vnto the Lord, and wept sore.10

11And she vowed a vow, and said, O Lord of hostes, if thou wilt indeed looke on the affliction of thine handmayd, and remember me, and not forget thine handmayd, but wilt giue vnto thine handmayd a man childe, then I will giue him vnto the Lord all the dayes of his life, and there shall no rasor come vpon his head.11

12And it came to passe as she continued praying before the Lord, that Eli marked her mouth.12

13Now Hannah, shee spake in her heart; onely her lippes mooued, but her voice was not heard: therefore Eli thought she had beene drunken.

14And Eli said vnto her, How long wilt thou be drunken? put away thy wine from thee.

15And Hannah answered, and said, No, my lord, I am a woman of a sorrowfull spirit: I haue drunke neither wine nor strong drinke, but haue powred out my soule before the Lord.15

16Count not thine handmaid for a daughter of Belial: for out of the abundance of my complaint and griefe, haue I spoken hitherto.16

17Then Eli answered, and said, Goe in peace: and the God of Israel grant thee thy petition, that thou hast asked of him.

18And she said, Let thine handmaid finde grace in thy sight. So the woman went her way, and did eate, and her countenance was no more sad.

19¶ And they rose vp in the morning early, and worshipped before the Lord, and returned, and came to their house to Ramah: and Elkanah knewe Hannah his wife, and the Lord remembred her.

20Wherefore it came to passe when the time was come about, after Hannah had conceiued, that shee bare a sonne, and called his name Samuel, saying; Because I haue asked him of the Lord.20

21And the man Elkanah, and all his house, went vp to offer vnto the Lord the yeerely sacrifice, and his vowe.

22But Hannah went not vp; for shee said vnto her husband, I will not goe vp vntill the childe be weaned, and then I will bring him, that he may appeare before the Lord, and there abide for euer.

23And Elkanah her husband said vnto her, Do what seemeth thee good, tary vntill thou haue weaned him, only the Lord establish his word: so the woman abode, and gaue her sonne sucke vntill she weaned him.

24¶ And when shee had weaned him, shee tooke him vp with her, with three bullocks, and one Ephah of floure, and a bottle of wine, and brought him vnto the house of the Lord in Shiloh: and the childe was young.

25And they slew a bullocke, and brought the childe to Eli.

26And she said, Oh my lord, as thy soule liueth, my lord, I am the woman, that stood by thee heere, praying vnto the Lord.

27For this childe I prayed, and the Lord hath giuen me my petition, which I asked of him:

28Therefore also I haue lent him to the Lord as long as hee liueth, he shall be lent to the Lord. And he worshipped the Lord there.28