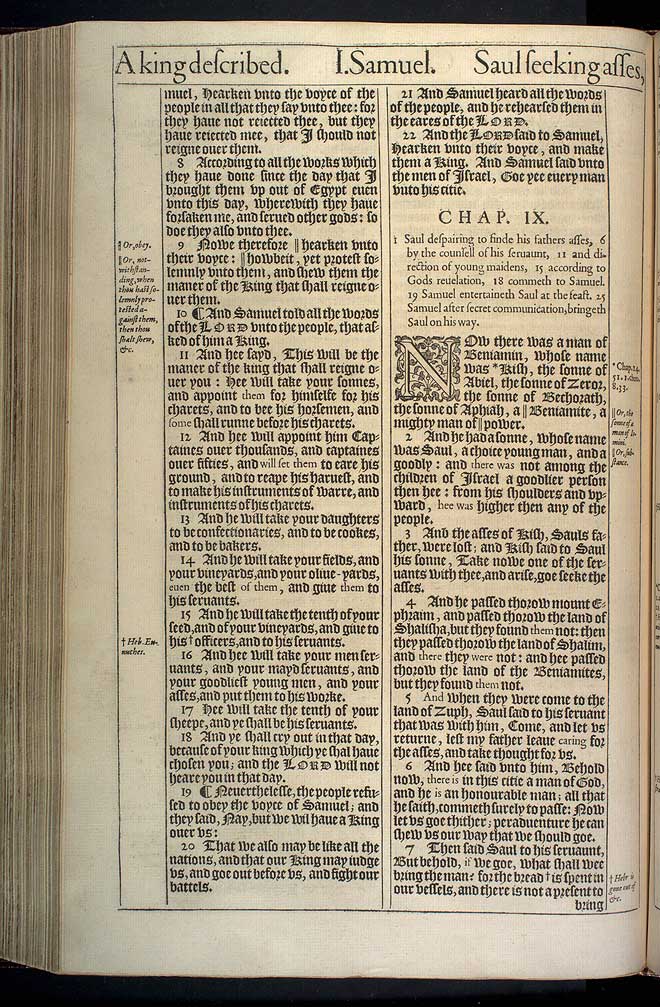 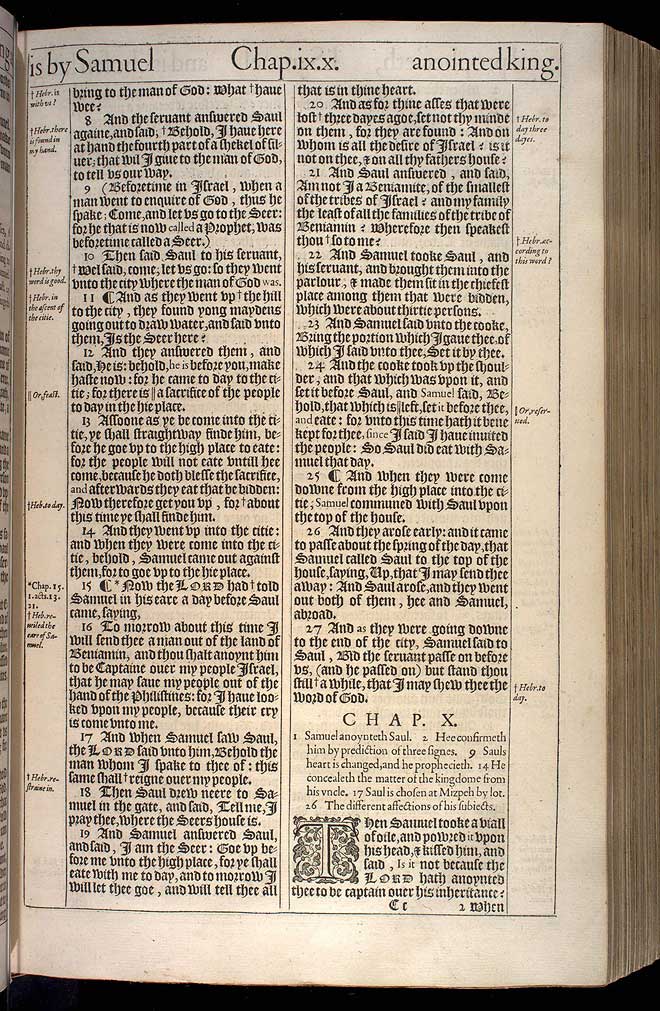 View this 1. Samuel chapter 9 scan at a larger size

1 Saul despairing to finde his fathers asses, 6 by the counsell of his seruaunt, 11 and direction of young maidens, 15 according to Gods reuelation, 18 commeth to Samuel. 19 Samuel entertaineth Saul at the feast. 25 Samuel after secret communication, bringeth Saul on his way.

2 And he had a sonne, whose name was Saul, a choice young man, and a goodly: and there was not among the children of Israel a goodlier person then hee: from his shoulders and vpward, hee was higher then any of the people.

3 And the asses of Kish, Sauls father, were lost; and Kish said to Saul his sonne, Take nowe one of the seruants with thee, and arise, goe seeke the asses.

5 And when they were come to the land of Zuph, Saul said to his seruant that was with him, Come, and let vs returne, lest my father leaue caring for the asses, and take thought for vs.

6 And hee said vnto him, Behold now, there is in this citie a man of God, and he is an honourable man; all that he saith, commeth surely to passe: Now let vs goe thither; peraduenture he can shew vs our way that we should goe.

7 Then said Saul to his seruaunt, But behold, if we goe, what shall wee bring the man? for the bread is spent in our vessels, and there is not a present to bring to the man of God: What haue wee?7

8 And the seruant answered Saul againe, and said, Behold, I haue here at hand the fourth part of a shekel of siluer; that wil I giue to the man of God, to tell vs our way.8

9 (Beforetime in Israel, when a man went to enquire of God, thus he spake; Come, and let vs go to the Seer: for he that is now called a Prophet, was beforetime called a Seer.)

10 Then said Saul to his seruant, Wel said, come, let vs go: so they went vnto the city where the man of God was.10

11 ¶ And as they went vp the hill to the city, they found yong maydens going out to draw water, and said vnto them, Is the Seer here?11

12 And they answered them, and said, He is: behold, he is before you, make haste now: for he came to day to the citie; for there is a sacrifice of the people to day in the hie place.12

13 Assoone as ye be come into the citie, ye shall straightway finde him, before he goe vp to the high place to eate: for the people will not eate vntill hee come, because he doth blesse the sacrifice, and afterwards they eat that be bidden: Now therefore get you vp, for about this time ye shall finde him.13

14 And they went vp into the citie: and when they were come into the citie, behold, Samuel came out against them, for to goe vp to the hie place.

15 ¶ Now the Lord had told Samuel in his eare a day before Saul came, saying,15

16 To morrow about this time I will send thee a man out of the land of Beniamin, and thou shalt anoynt him to be Captaine ouer my people Israel, that he may saue my people out of the hand of the Philistines: for I haue looked vpon my people, because their cry is come vnto me.

17 And when Samuel saw Saul, the Lord said vnto him, Behold the man whom I spake to thee of: this same shall reigne ouer my people.17

18 Then Saul drew neere to Samuel in the gate, and said, Tell me, I pray thee, where the Seers house is.

19 And Samuel answered Saul, and said, I am the Seer: Goe vp before me vnto the high place, for ye shall eate with me to day, and to morrow I will let thee goe, and will tell thee all that is in thine heart.

20 And as for thine asses that were lost three dayes agoe, set not thy minde on them, for they are found: And on whom is all the desire of Israel? is it not on thee, & on all thy fathers house?20

21 And Saul answered, and said, Am not I a Beniamite, of the smallest of the tribes of Israel? and my family the least of all the families of the tribe of Beniamin? Wherefore then speakest thou so to me?21

22 And Samuel tooke Saul, and his seruant, and brought them into the parlour, & made them sit in the chiefest place among them that were bidden, which were about thirtie persons.

23 And Samuel said vnto the cooke, Bring the portion which I gaue thee, of which I said vnto thee, Set it by thee.

24 And the cooke took vp the shoulder, and that which was vpon it, and set it before Saul, and Samuel said, Behold, that which is left, set it before thee, and eate: for vnto this time hath it bene kept for thee, since I said I haue inuited the people: So Saul did eat with Samuel that day.24

25 ¶ And when they were come downe from the high place into the citie, Samuel communed with Saul vpon the top of the house.

26 And they arose early: and it came to passe about the spring of the day, that Samuel called Saul to the top of the house, saying, Up, that I may send thee away: And Saul arose, and they went out both of them, hee and Samuel, abroad.

27 And as they were going downe to the end of the city, Samuel said to Saul, Bid the seruant passe on before vs, (and he passed on) but stand thou still a while, that I may shew thee the word of God.27