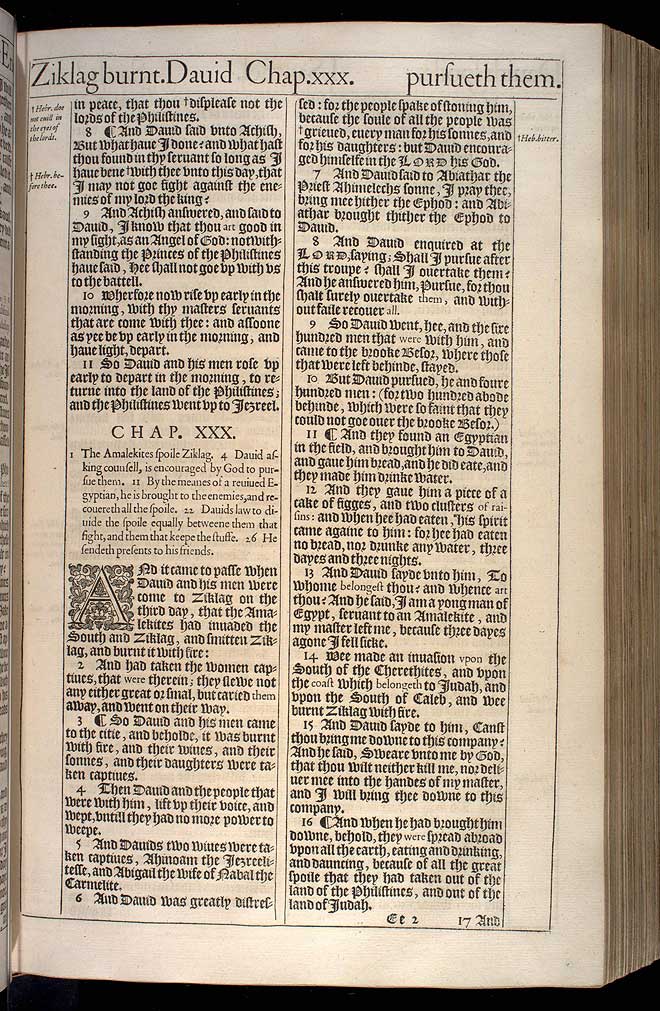 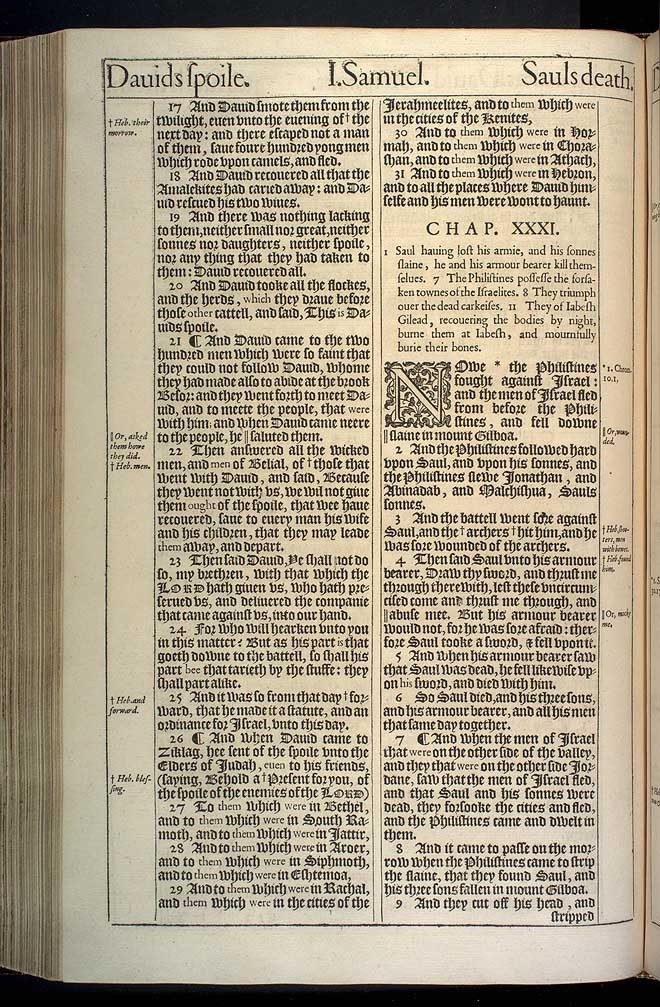 View this 1. Samuel chapter 30 scan at a larger size

1 The Amalekites spoile Ziklag. 4 Dauid asking counsell, is encouraged by God to pursue them. 11 By the meanes of a reuiued Egyptian, he is brought to the enemies, and recouereth all the spoile. 22 Dauids law to diuide the spoile equally betweene them that fight, and them that keepe the stuffe. 26 He sendeth presents to his friends.

1 And it came to passe when Dauid and his men were come to Ziklag on the third day, that the Amalekites had inuaded the South and Ziklag, and smitten Ziklag, and burnt it with fire:

2 And had taken the women captiues, that were therein; they slewe not any either great or smal, but caried them away, and went on their way.

3 ¶ So Dauid and his men came to the citie, and beholde, it was burnt with fire, and their wiues, and their sonnes, and their daughters were taken captiues.

4 Then Dauid and the people that were with him, lift vp their voice, and wept, vntill they had no more power to weepe.

5 And Dauids two wiues were taken captiues, Ahinoam the Iezreelitesse, and Abigail the wife of Nabal the Carmelite.

6 And Dauid was greatly distressed: for the people spake of stoning him, because the soule of all the people was grieued, euery man for his sonnes, and for his daughters: but Dauid encouraged himselfe in the Lord his God.6

8 And Dauid enquired at the Lord, saying; Shall I pursue after this troupe? shall I ouertake them? And he answered him, Pursue, for thou shalt surely ouertake them, and without faile recouer all.

9 So Dauid went, hee, and the sixe hundred men that were with him, and came to the brooke Besor, where those that were left behinde, stayed.

10 But Dauid pursued, he and foure hundred men: (for two hundred abode behinde, which were so faint that they could not goe ouer the brooke Besor.)

11 ¶ And they found an Egyptian in the field, and brought him to Dauid, and gaue him bread, and he did eate, and they made him drinke water.

12 And they gaue him a piece of a cake of figges, and two clusters of raisins: and when hee had eaten, his spirit came againe to him: for hee had eaten no bread, nor drunke any water, three dayes and three nights.

13 And Dauid sayde vnto him, To whome belongest thou? and whence art thou? And he said, I am a yong man of Egypt, seruant to an Amalekite, and my master left me, because three dayes agone I fell sicke.

16 ¶ And when he had brought him downe, behold, they were spread abroad vpon all the earth, eating and drinking, and dauncing, because of all the great spoile that they had taken out of the land of the Philistines, and out of the land of Iudah.

17 And Dauid smote them from the twilight, euen vnto the euening of the next day: and there escaped not a man of them, saue foure hundred yong men which rode vpon camels, and fled.17

18 And Dauid recouered all that the Amalekites had caried away: and Dauid rescued his two wiues.

19 And there was nothing lacking to them, neither small nor great, neither sonnes nor daughters, neither spoile, nor any thing that they had taken to them: Dauid recouered all.

20 And Dauid tooke all the flockes, and the herds, which they draue before those other cattell, and said, This is Dauids spoile.

21 ¶ And Dauid came to the two hundred men which were so faint that they could not follow Dauid, whome they had made also to abide at the brook Besor: and they went forth to meet Dauid, and to meete the people, that were with him; and when Dauid came neere to the people, he saluted them.21

22 Then answered all the wicked men, and men of Belial, of those that went with Dauid, and said, Because they went not with vs, we wil not giue them ought of the spoile, that wee haue recouered, saue to euery man his wife and his children, that they may leade them away, and depart.22

23 Then said Dauid, Ye shall not do so, my brethren, with that which the Lord hath giuen vs, who hath preserued vs, and deliuered the companie that came against vs, into our hand.

24 For who will hearken vnto you in this matter? But as his part is that goeth downe to the battell, so shall his part bee that tarieth by the stuffe: they shall part alike.

25 And it was so from that day forward, that he made it a statute, and an ordinance for Israel, vnto this day.25

26 ¶ And when Dauid came to Ziklag, hee sent of the spoile vnto the Elders of Iudah, euen to his friends, (saying, Behold a Present for you, of the spoile of the enemies of the Lord )26

31 And to them which were in Hebron, and to all the places where Dauid himselfe and his men were wont to haunt.