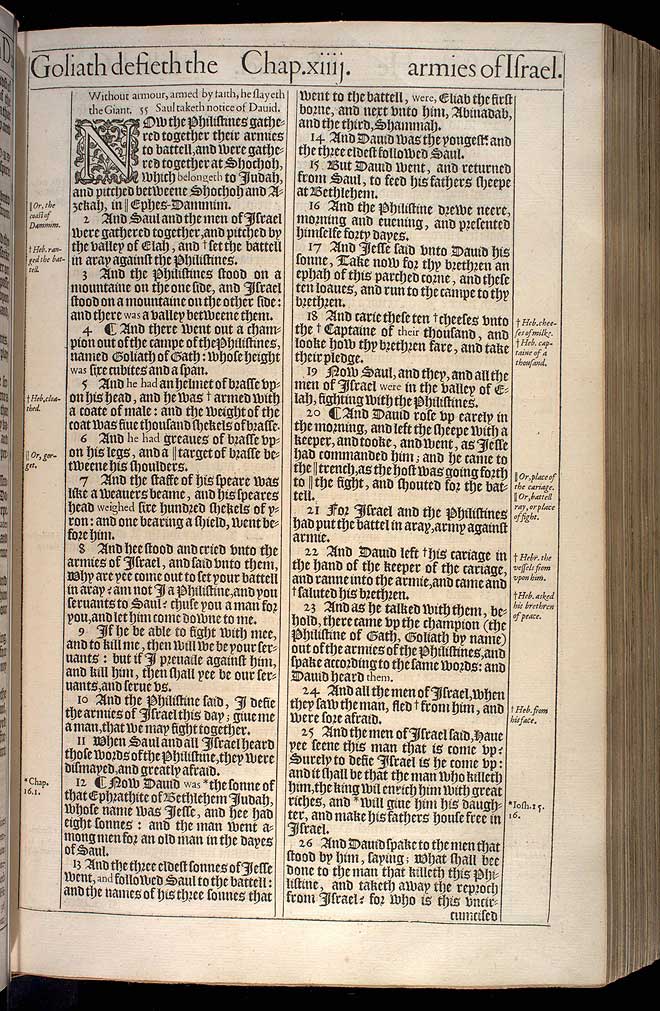 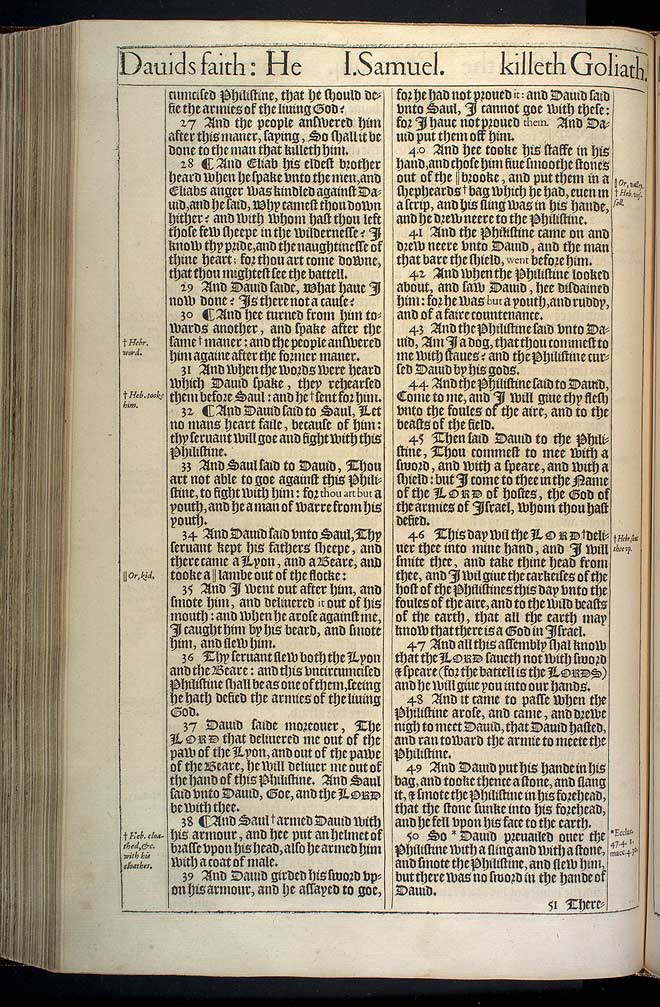 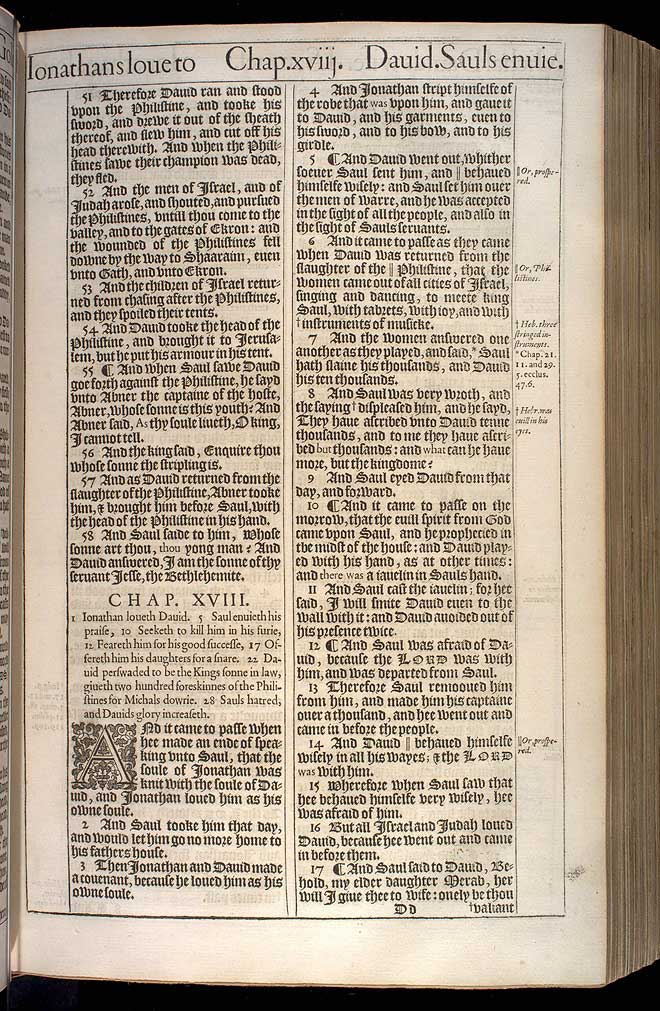 View this 1. Samuel chapter 17 scan at a larger size

1 The armies of the Israelites, and Philistines beeing readie to battell, 4 Goliath commeth proudly forth, to chalenge a combate. 12 Dauid sent by his father to visit his brethren, taketh the chalenge. 28 Eliab chideth him. 30 He is brought to Saul. 32 He sheweth the reason of his confidence. 38 Without armour, armed by faith, he slayeth the Giant. 55 Saul taketh notice of Dauid.

2 And Saul and the men of Israel were gathered together, and pitched by the valley of Elah, and set the battell in aray against the Philistines.2

4 ¶ And there went out a champion out of the campe of the Philistines, named Goliath of Gath: whose height was sixe cubites and a span.

5 And he had an helmet of brasse vpon his head, and he was armed with a coate of male: and the weight of the coat was fiue thousand shekels of brasse.5

6 And he had greaues of brasse vpon his legs, and a target of brasse betweene his shoulders.6

7 And the staffe of his speare was like a weauers beame, and his speares head weighed sixe hundred shekels of yron: and one bearing a shield, went before him.

8 And hee stood and cried vnto the armies of Israel, and said vnto them, Why are yee come out to set your battell in aray? am not I a Philistine, and you seruants to Saul? chuse you a man for you, and let him come downe to me.

9 If he be able to fight with mee, and to kill me, then will we be your seruants: but if I preuaile against him, and kill him, then shall yee be our seruants, and serue vs.

10 And the Philistine said, I defie the armies of Israel this day; giue me a man, that we may fight together.

11 When Saul and all Israel heard those words of the Philistine, they were dismayed, and greatly afraid.

12 ¶ Now Dauid was the sonne of that Ephrathite of Bethlehem Iudah, whose name was Iesse, and hee had eight sonnes: and the man went among men for an old man in the dayes of Saul.12

13 And the three eldest sonnes of Iesse went, and followed Saul to the battell: and the names of his three sonnes that went to the battell, were, Eliab the first borne, and next vnto him, Abinadab, and the third, Shammah.

14 And Dauid was the yongest: and the three eldest followed Saul.

15 But Dauid went, and returned from Saul, to feed his fathers sheepe at Bethlehem.

16 And the Philistine drewe neere, morning and euening, and presented himselfe forty dayes.

17 And Iesse said vnto Dauid his sonne, Take now for thy brethren an ephah of this parched corne, and these ten loaues, and run to the campe to thy brethren.

18 And carie these ten cheeses vnto the Captaine of their thousand, and looke how thy brethren fare, and take their pledge.18

19 Now Saul, and they, and all the men of Israel were in the valley of Elah, fighting with the Philistines.

20 ¶ And Dauid rose vp earely in the morning, and left the sheepe with a keeper, and tooke, and went, as Iesse had commanded him; and he came to the trench, as the host was going forth to the fight, and shouted for the battell.20

21 For Israel and the Philistines had put the battel in aray, army against armie.

22 And Dauid left his cariage in the hand of the keeper of the cariage, and ranne into the armie, and came and saluted his brethren.22

23 And as he talked with them, behold, there came vp the champion (the Philistine of Gath, Goliath by name) out of the armies of the Philistines, and spake according to the same words: and Dauid heard them.

24 And all the men of Israel, when they saw the man, fled from him, and were sore afraid.24

25 And the men of Israel said, Haue yee seene this man that is come vp? Surely to defie Israel is he come vp: and it shall be that the man who killeth him, the king wil enrich him with great riches, and will giue him his daughter, and make his fathers house free in Israel.25

26 And Dauid spake to the men that stood by him, saying; What shall bee done to the man that killeth this Philistine; and taketh away the reproch from Israel? for who is this vncircumcised Philistine, that he should defie the armies of the liuing God?

27 And the people answered him after this maner, saying, So shall it be done to the man that killeth him.

28 ¶ And Eliab his eldest brother heard when he spake vnto the men, and Eliabs anger was kindled against Dauid, and he said, Why camest thou down hither? and with whom hast thou left those few sheepe in the wildernesse? I know thy pride, and the naughtinesse of thine heart; for thou art come downe, that thou mightest see the battell.

29 And Dauid saide, What haue I now done? Is there not a cause?

30 ¶ And hee turned from him towards another, and spake after the same maner: and the people answered him againe after the former maner.30

31 And when the words were heard which Dauid spake, they rehearsed them before Saul: and he sent for him.31

32 ¶ And Dauid said to Saul, Let no mans heart faile, because of him: thy seruant will goe and fight with this Philistine.

33 And Saul said to Dauid, Thou art not able to goe against this Philistine, to fight with him: for thou art but a youth, and he a man of warre from his youth.

34 And Dauid said vnto Saul, Thy seruant kept his fathers sheepe, and there came a Lyon, and a Beare, and tooke a lambe out of the flocke:34

36 Thy seruant slew both the Lyon and the Beare: and this vncircumcised Philistine shall be as one of them, seeing he hath defied the armies of the liuing God.

37 Dauid saide moreouer, The Lord that deliuered me out of the paw of the Lyon, and out of the pawe of the Beare, he will deliuer me out of the hand of this Philistine. And Saul said vnto Dauid, Goe, and the Lord be with thee.

38 ¶ And Saul armed Dauid with his armour, and hee put an helmet of brasse vpon his head, also he armed him with a coat of male.38

39 And Dauid girded his sword vpon his armour, and he assayed to goe, for he had not proued it: and Dauid said vnto Saul, I cannot goe with these: for I haue not proued them. And Dauid put them off him.

40 And hee tooke his staffe in his hand, and chose him fiue smoothe stones out of the brooke, and put them in a shepheards bag which he had, euen in a scrip, and his sling was in his hande, and he drew neere to the Philistine.40

41 And the Philistine came on and drew neere vnto Dauid, and the man that bare the shield, went before him.

42 And when the Philistine looked about, and saw Dauid, hee disdained him: for he was but a youth, and ruddy, and of a faire countenance.

44 And the Philistine said to Dauid, Come to me, and I will giue thy flesh vnto the foules of the aire, and to the beasts of the field.

45 Then said Dauid to the Philistine, Thou commest to mee with a sword, and with a speare, and with a shield: but I come to thee in the Name of the Lord of hostes, the God of the armies of Israel, whom thou hast defied.

46 This day wil the Lord deliuer thee into mine hand, and I will smite thee, and take thine head from thee, and I wil giue the carkeises of the host of the Philistines this day vnto the foules of the aire, and to the wild beasts of the earth, that all the earth may know that there is a God in Israel.46

47 And all this assembly shal know that the Lord saueth not with sword & speare (for the battell is the Lords ) and he will giue you into our hands.

48 And it came to passe when the Philistine arose, and came, and drewe nigh to meet Dauid, that Dauid hasted, and ran toward the armie to meete the Philistine.

49 And Dauid put his hande in his bag, and tooke thence a stone, and slang it, & smote the Philistine in his forehead, that the stone sunke into his forehead, and he fell vpon his face to the earth.

50 So Dauid preuailed ouer the Philistine with a sling and with a stone, and smote the Philistine, and slew him, but there was no sword in the hande of Dauid.50

51 Therefore Dauid ran and stood vpon the Philistine, and tooke his sword, and drewe it out of the sheath thereof, and slew him, and cut off his head therewith. And when the Philistines sawe their champion was dead, they fled.

52 And the men of Israel, and of Iudah arose, and shouted, and pursued the Philistines, vntill thou come to the valley, and to the gates of Ekron: and the wounded of the Philistines fell downe by the way to Shaaraim, euen vnto Gath, and vnto Ekron.

53 And the children of Israel returned from chasing after the Philistines, and they spoiled their tents.

54 And Dauid tooke the head of the Philistine, and brought it to Ierusalem, but he put his armour in his tent.

55 ¶ And when Saul sawe Dauid goe forth against the Philistine, he sayd vnto Abner the captaine of the hoste, Abner, whose sonne is this youth? And Abner said, As thy soule liueth, O king, I cannot tell.

56 And the king said, Enquire thou whose sonne the stripling is.

58 And Saul saide to him, Whose sonne art thou, thou yong man? And Dauid answered, I am the sonne of thy seruant Iesse, the Bethlehemite.