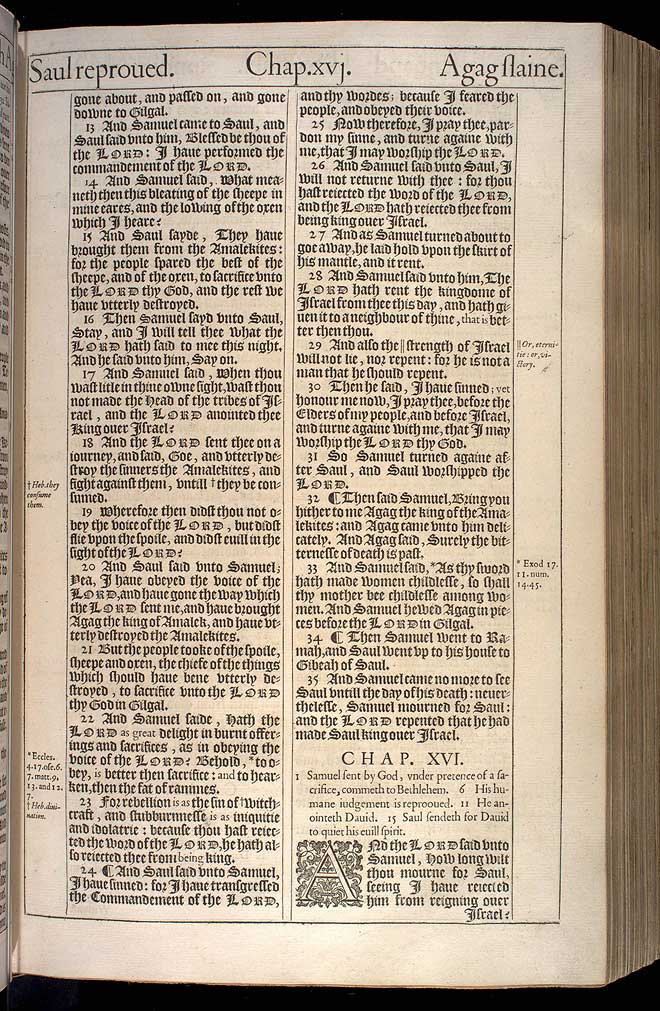 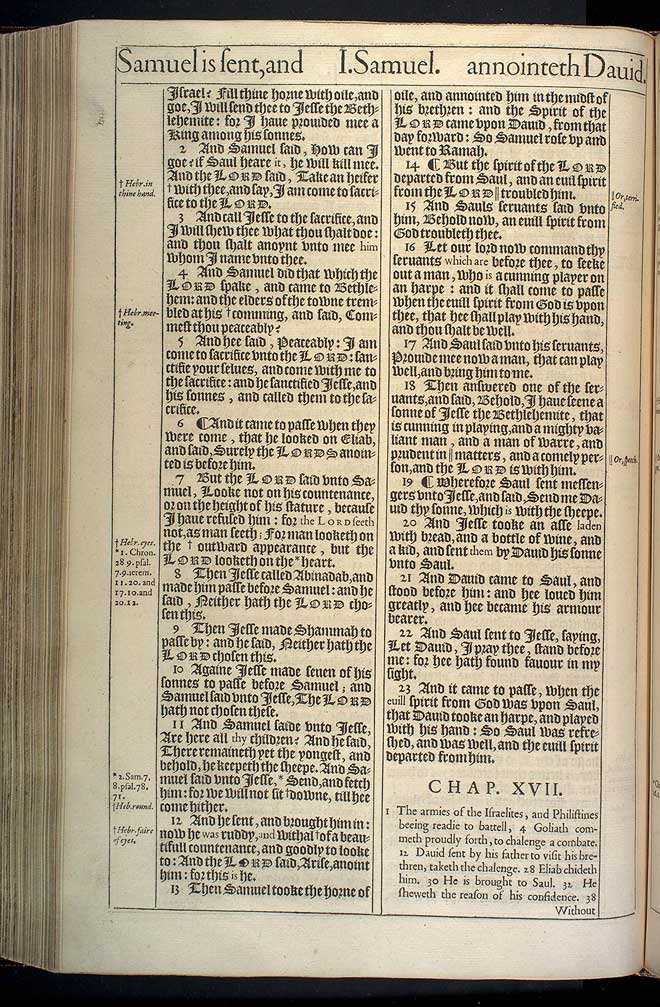 View this 1. Samuel chapter 16 scan at a larger size

1 Samuel sent by God, vnder pretence of a sacrifice, commeth to Bethlehem. 6 His humane iudgement is reprooued. 11 He anointeth Dauid. 15 Saul sendeth for Dauid to quiet his euill spirit.

1 And the Lord said vnto Samuel, How long wilt thou mourne for Saul, seeing I haue reiected him from reigning ouer Israel? Fill thine horne with oile, and goe, I will send thee to Iesse the Bethlehemite: for I haue prouided mee a King among his sonnes.

2 And Samuel said, How can I goe? if Saul heare it, he will kill mee. And the Lord said, Take an heifer with thee, and say, I am come to sacrifice to the Lord.2

3 And call Iesse to the sacrifice, and I will shew thee what thou shalt doe: and thou shalt anoynt vnto mee him whom I name vnto thee.

4 And Samuel did that which the Lord spake, and came to Bethlehem: and the elders of the towne trembled at his comming, and said, Commest thou peaceably?4

6 ¶ And it came to passe when they were come, that he looked on Eliab, and said, Surely the Lords anointed is before him.

8 Then Iesse called Abinadab, and made him passe before Samuel: and he said, Neither hath the Lord chosen this.

9 Then Iesse made Shammah to passe by: and he said, Neither hath the Lord chosen this.

10 Againe Iesse made seuen of his sonnes to passe before Samuel; and Samuel said vnto Iesse, The Lord hath not chosen these.

11 And Samuel saide vnto Iesse, Are here all thy children? And he said, There remaineth yet the yongest, and behold, he keepeth the sheepe. And Samuel said vnto Iesse, Send, and fetch him: for we will not sit downe, till hee come hither.11

12 And he sent, and brought him in: now he was ruddy, and withal of a beautifull countenance, and goodly to looke to: And the Lord said, Arise, anoint him: for this is he.12

13 Then Samuel tooke the horne of oile, and annointed him in the midst of his brethren: and the Spirit of the Lord came vpon Dauid, from that day forward: So Samuel rose vp and went to Ramah.

14 ¶ But the spirit of the Lord departed from Saul, and an euil spirit from the Lord troubled him.14

16 Let our lord now command thy seruants which are before thee, to seeke out a man, who is a cunning player on an harpe: and it shall come to passe when the euill spirit from God is vpon thee, that hee shall play with his hand, and thou shalt be well.

17 And Saul said vnto his seruants, Prouide mee now a man, that can play well, and bring him to me.

18 Then answered one of the seruants, and said, Behold, I haue seene a sonne of Iesse the Bethlehemite, that is cunning in playing, and a mighty valiant man, and a man of warre, and prudent in matters, and a comely person, and the Lord is with him.18

19 ¶ Wherefore Saul sent messengers vnto Iesse, and said, Send me Dauid thy sonne, which is with the sheepe.

20 And Iesse tooke an asse laden with bread, and a bottle of wine, and a kid, and sent them by Dauid his sonne vnto Saul.

21 And Dauid came to Saul, and stood before him: and hee loued him greatly, and hee became his armour bearer.

22 And Saul sent to Iesse, saying, Let Dauid, I pray thee, stand before me: for hee hath found fauour in my sight.

23 And it came to passe, when the euill spirit from God was vpon Saul, that Dauid tooke an harpe, and played with his hand: So Saul was refreshed, and was well, and the euill spirit departed from him.