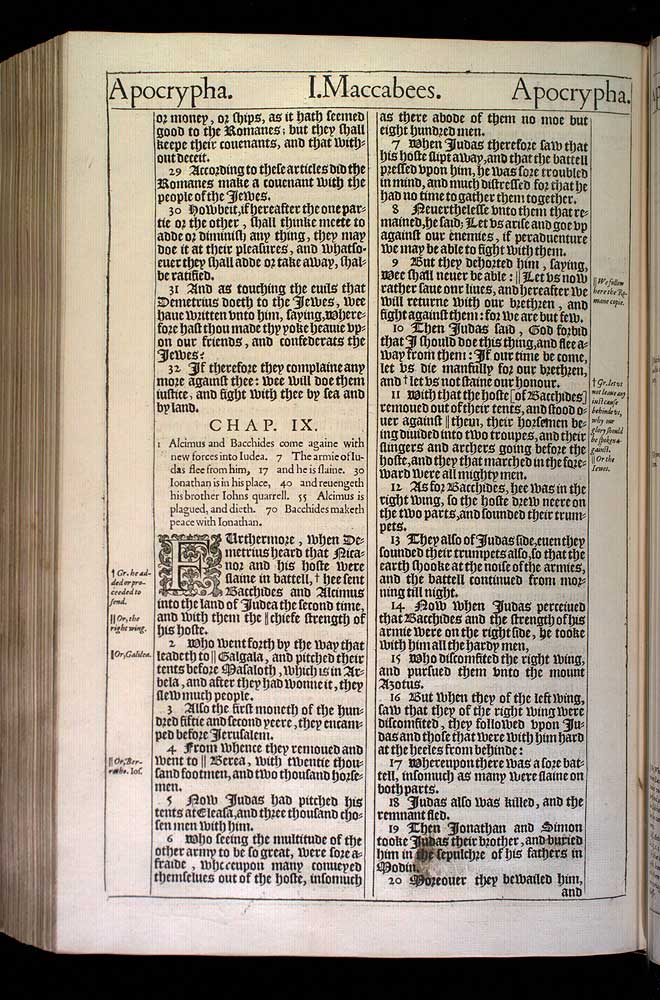 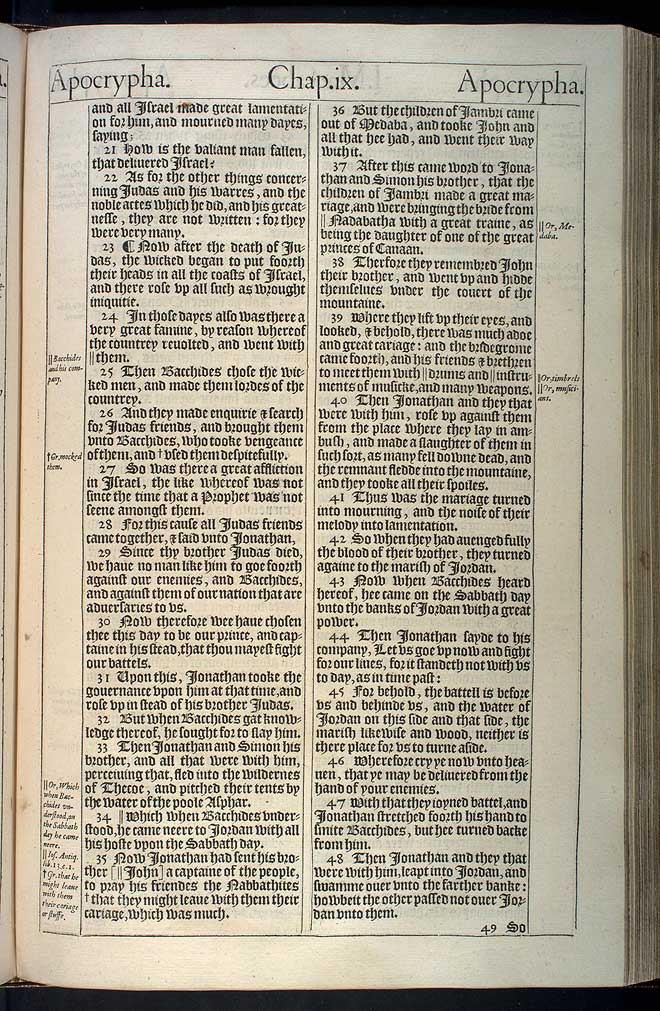 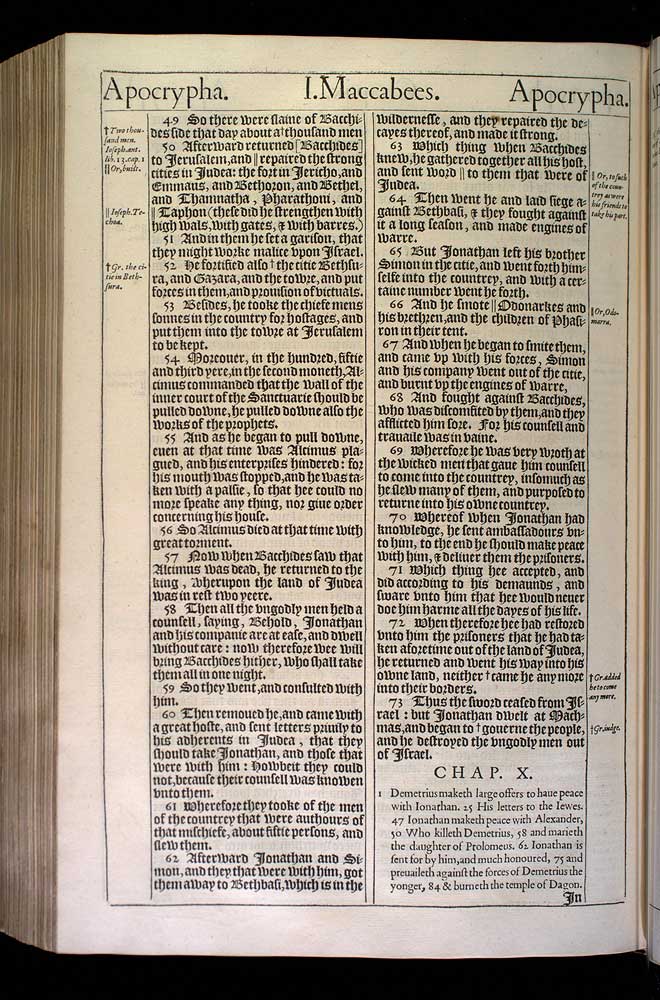 View this 1. Maccabees chapter 9 scan at a larger size

1 Alcimus and Bacchides come againe with new forces into Iudea. 7 The armie of Iudas flee from him, 17 and he is slaine. 30 Ionathan is in his place, 40 and reuengeth his brother Iohns quarrell. 55 Alcimus is plagued, and dieth. 70 Bacchides maketh peace with Ionathan.

1 Furthermore, when Demetrius heard that Nicanor and his hoste were slaine in battell, hee sent Bacchides and Alcimus into the land of Iudea the second time, and with them the chiefe strength of his hoste.1

2 Who went forth by the way that leadeth to Galgala, and pitched their tents before Masaloth, which is in Arbela, and after they had wonne it, they slew much people.2

3 Also the first moneth of the hundred fiftie and second yeere, they encamped before Ierusalem.

4 From whence they remoued and went to Berea, with twentie thousand footmen, and two thousand horsemen.4

5 Now Iudas had pitched his tents at Eleasa, and three thousand chosen men with him.

6 Who seeing the multitude of the other army to be so great, were sore afraide, whereupon many conueyed themselues out of the hoste, insomuch as there abode of them no moe but eight hundred men.

7 When Iudas therefore saw that his hoste slipt away, and that the battell pressed vpon him, he was sore troubled in mind, and much distressed for that he had no time to gather them together.

8 Neuerthelesse vnto them that remained, he said; Let vs arise and goe vp against our enemies, if peraduenture we may be able to fight with them.

9 But they dehorted him, saying, Wee shall neuer be able: Let vs now rather saue our liues, and hereafter we will returne with our brethren, and fight against them: for we are but few.9

10 Then Iudas said, God forbid that I should doe this thing, and flee away from them: If our time be come, let vs die manfully for our brethren, and let vs not staine our honour.10

11 With that the hoste [of Bacchides] remoued out of their tents, and stood ouer against them, their horsemen being diuided into two troupes, and their slingers and archers going before the hoste, and they that marched in the foreward were all mighty men.11

12 As for Bacchides, hee was in the right wing, so the hoste drew neere on the two parts, and sounded their trumpets.

13 They also of Iudas side, euen they sounded their trumpets also, so that the earth shooke at the noise of the armies, and the battell continued from morning till night.

14 Now when Iudas perceiued that Bacchides and the strength of his armie were on the right side, he tooke with him all the hardy men,

15 Who discomfited the right wing, and pursued them vnto the mount Azotus.

16 But when they of the left wing, saw that they of the right wing were discomfited, they followed vpon Iudas and those that were with him hard at the heeles from behinde:

17 Whereupon there was a sore battell, insomuch as many were slaine on both parts.

18 Iudas also was killed, and the remnant fled.

19 Then Ionathan and Simon tooke Iudas their brother, and buried him in the sepulchre of his fathers in Modin.

20 Moreouer they bewailed him, and all Israel made great lamentation for him, and mourned many dayes, saying;

21 How is the valiant man fallen, that deliuered Israel?

22 As for the other things concerning Iudas and his warres, and the noble actes which he did, and his greatnesse, they are not written: for they were very many.

23 ¶ Now after the death of Iudas, the wicked began to put foorth their heads in all the coasts of Israel, and there rose vp all such as wrought iniquitie.

24 In those dayes also was there a very great famine, by reason whereof the countrey reuolted, and went with them.24

25 Then Bacchides chose the wicked men, and made them lordes of the countrey.

26 And they made enquirie & search for Iudas friends, and brought them vnto Bacchides, who tooke vengeance of them, and vsed them despitefully.26

27 So was there a great affliction in Israel, the like whereof was not since the time that a Prophet was not seene amongst them.

28 For this cause all Iudas friends came together, & said vnto Ionathan,

29 Since thy brother Iudas died, we haue no man like him to goe foorth against our enemies, and Bacchides, and against them of our nation that are aduersaries to vs.

30 Now therefore wee haue chosen thee this day to be our prince, and captaine in his stead, that thou mayest fight our battels.

31 Upon this, Ionathan tooke the gouernance vpon him at that time, and rose vp in stead of his brother Iudas.

32 But when Bacchides gat knowledge thereof, he sought for to slay him.

33 Then Ionathan and Simon his brother, and all that were with him, perceiuing that, fled into the wildernes of Thecoe, and pitched their tents by the water of the poole Asphar.

34 Which when Bacchides vnderstood, he came neere to Iordan with all his hoste vpon the Sabbath day.34

35 Now Ionathan had sent his brother [ Iohn] a captaine of the people, to pray his friendes the Nabbathites that they might leaue with them their cariage, which was much.35

36 But the children of Iambri came out of Medaba, and tooke Iohn and all that hee had, and went their way with it.

37 After this came word to Ionathan and Simon his brother, that the children of Iambri made a great mariage, and were bringing the bride from Nadabatha with a great traine, as being the daughter of one of the great princes of Canaan.37

38 Therfore they remembred Iohn their brother, and went vp and hidde themselues vnder the couert of the mountaine.

39 Where they lift vp their eyes, and looked, & behold, there was much adoe and great cariage: and the bridegrome came foorth, and his friends & brethren to meet them with drums and instruments of musicke, and many weapons.39

40 Then Ionathan and they that were with him, rose vp against them from the place where they lay in ambush, and made a slaughter of them in such sort, as many fell downe dead, and the remnant fledde into the mountaine, and they tooke all their spoiles.

41 Thus was the mariage turned into mourning, and the noise of their melody into lamentation.

42 So when they had auenged fully the blood of their brother, they turned againe to the marish of Iordan.

43 Now when Bacchides heard hereof, hee came on the Sabbath day vnto the banks of Iordan with a great power.

44 Then Ionathan sayde to his company, Let vs goe vp now and fight for our liues, for it standeth not with vs to day, as in time past:

45 For behold, the battell is before vs and behinde vs, and the water of Iordan on this side and that side, the marish likewise and wood, neither is there place for vs to turne aside.

46 Wherefore cry ye now vnto heauen, that ye may be deliuered from the hand of your enemies.

47 With that they ioyned battel, and Ionathan stretched foorth his hand to smite Bacchides, but hee turned backe from him.

48 Then Ionathan and they that were with him, leapt into Iordan, and swamme ouer vnto the farther banke: howbeit the other passed not ouer Iordan vnto them.

50 Afterward returned [Bacchides] to Ierusalem, and repaired the strong cities in Iudea: the fort in Iericho, and Emmaus, and Bethoron, and Bethel, and Thamnatha, Pharathoni, and Taphon (these did he strengthen with high wals, with gates, & with barres.)50

51 And in them he set a garison, that they might worke malice vpon Israel.

52 He fortified also the citie Bethsura, and Gazara, and the towre, and put forces in them, and prouision of victuals.52

53 Besides, he tooke the chiefe mens sonnes in the country for hostages, and put them into the towre at Ierusalem to be kept.

54 Moreouer, in the hundred, fiftie and third yere, in the second moneth, Alcimus commanded that the wall of the inner court of the Sanctuarie should be pulled downe, he pulled downe also the works of the prophets.

55 And as he began to pull downe, euen at that time was Alcimus plagued, and his enterprises hindered: for his mouth was stopped, and he was taken with a palsie, so that hee could no more speake any thing, nor giue order concerning his house.

56 So Alcimus died at that time with great torment.

57 Now when Bacchides saw that Alcimus was dead, he returned to the king, wherupon the land of Iudea was in rest two yeere.

58 Then all the vngodly men held a counsell, saying, Behold, Ionathan and his companie are at ease, and dwell without care: now therefore wee will bring Bacchides hither, who shall take them all in one night.

59 So they went, and consulted with him.

60 Then remoued he, and came with a great hoste, and sent letters priuily to his adherents in Iudea, that they should take Ionathan, and those that were with him: Howbeit they could not, because their counsell was knowen vnto them.

61 Wherefore they tooke of the men of the countrey that were authours of that mischiefe, about fiftie persons, and slew them.

62 Afterward Ionathan and Simon, and they that were with him, got them away to Bethbasi, which is in the wildernesse, and they repaired the decayes thereof, and made it strong.

63 Which thing when Bacchides knew, he gathered together all his host, and sent word to them that were of Iudea.63

64 Then went he and laid siege against Bethbasi, & they fought against it a long season, and made engines of warre.

65 But Ionathan left his brother Simon in the citie, and went forth himselfe into the countrey, and with a certaine number went he forth.

66 And he smote Odonarkes and his brethren, and the children of Phasiron in their tent.66

67 And when he began to smite them, and came vp with his forces, Simon and his company went out of the citie, and burnt vp the engines of warre,

68 And fought against Bacchides, who was discomfited by them, and they afflicted him sore. For his counsell and trauaile was in vaine.

69 Wherefore he was very wroth at the wicked men that gaue him counsell to come into the countrey, insomuch as he slew many of them, and purposed to returne into his owne countrey.

70 Whereof when Ionathan had knowledge, he sent ambassadours vnto him, to the end he should make peace with him, & deliuer them the prisoners.

71 Which thing hee accepted, and did according to his demaunds, and sware vnto him that hee would neuer doe him harme all the dayes of his life.

72 When therefore hee had restored vnto him the prisoners that he had taken aforetime out of the land of Iudea, he returned and went his way into his owne land, neither came he any more into their borders.72

73 Thus the sword ceased from Israel: but Ionathan dwelt at Machmas, and began to gouerne the people, and he destroyed the vngodly men out of Israel.73