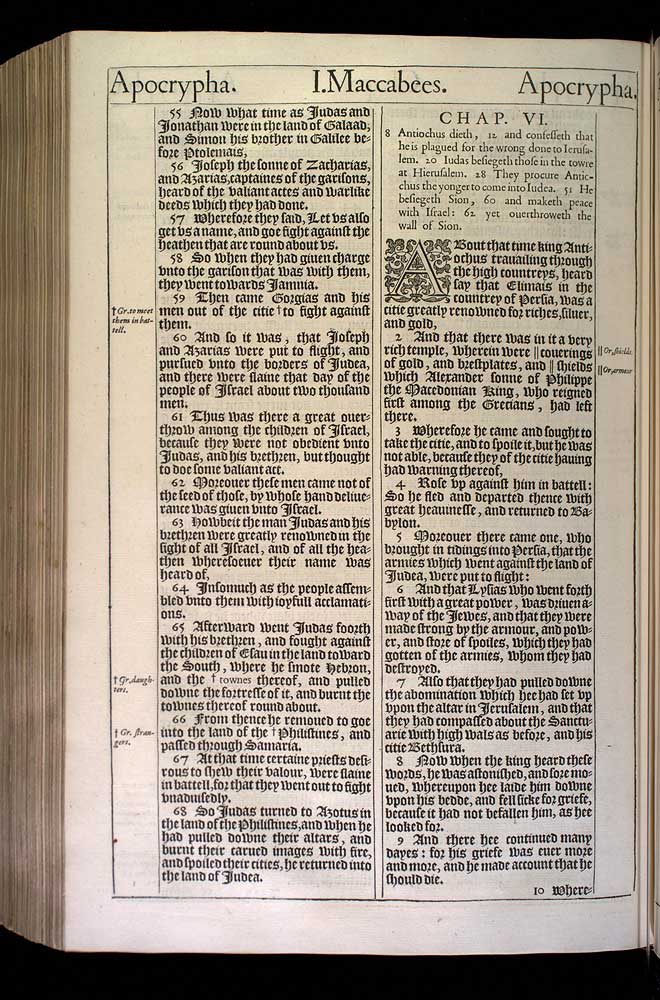 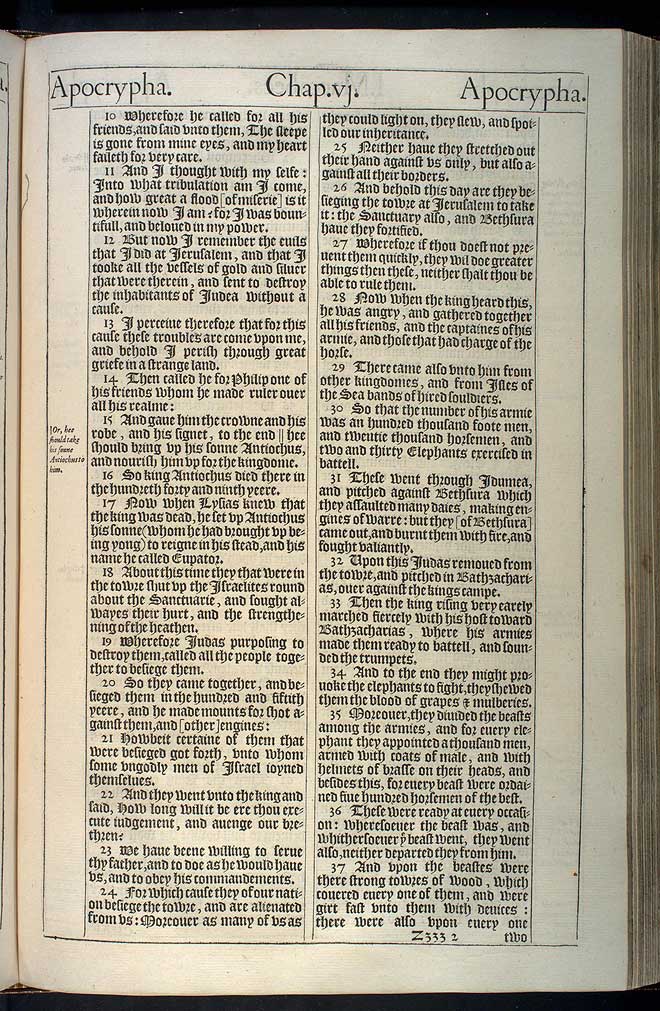 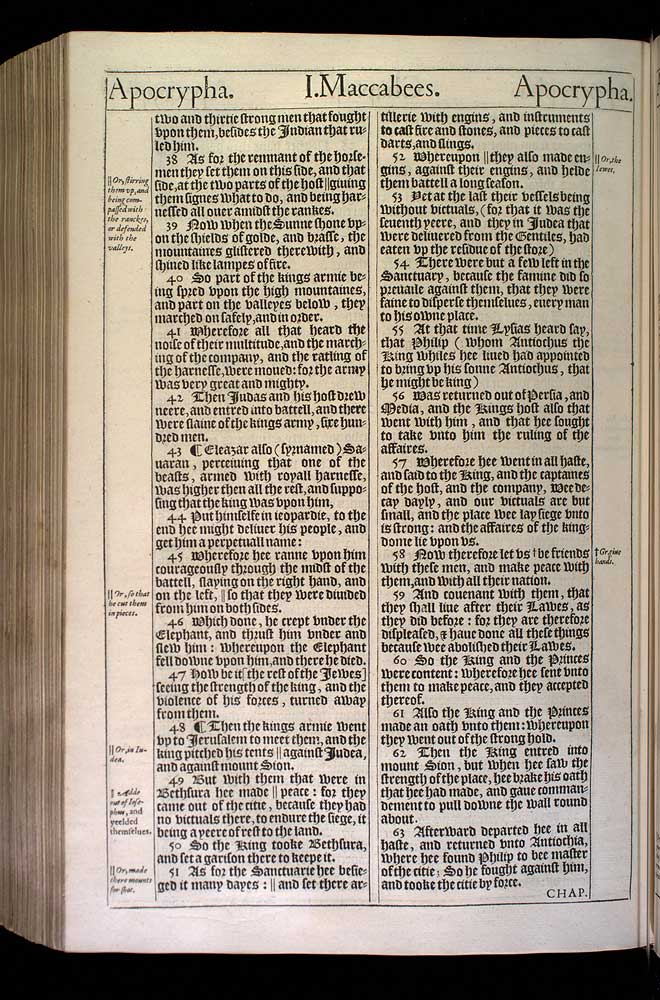 View this 1. Maccabees chapter 6 scan at a larger size

8 Antiochus dieth, 12 and confesseth that he is plagued for the wrong done to Ierusalem. 20 Iudas besiegeth those in the towre at Hierusalem. 28 They procure Antiochus the yonger to come into Iudea. 51 He besiegeth Sion, 60 and maketh peace with Israel: 62 yet ouerthroweth the wall of Sion.

1 About that time king Antiochus trauailing through the high countreys, heard say that Elimais in the countrey of Persia, was a citie greatly renowned for riches, siluer, and gold,

2 And that there was in it a very rich temple, wherein were couerings of gold, and brestplates, and shields which Alexander sonne of Philippe the Macedonian King, who reigned first among the Grecians, had left there.2

3 Wherefore he came and sought to take the citie, and to spoile it, but he was not able, because they of the citie hauing had warning thereof,

4 Rose vp against him in battell: So he fled and departed thence with great heauinesse, and returned to Babylon.

5 Moreouer there came one, who brought in tidings into Persia, that the armies which went against the land of Iudea, were put to flight:

6 And that Lysias who went forth first with a great power, was driuen away of the Iewes, and that they were made strong by the armour, and power, and store of spoiles, which they had gotten of the armies, whom they had destroyed.

7 Also that they had pulled downe the abomination which hee had set vp vpon the altar in Ierusalem, and that they had compassed about the Sanctuarie with high wals as before, and his citie Bethsura.

8 Now when the king heard these words, he was astonished, and sore moued, whereupon hee laide him downe vpon his bedde, and fell sicke for griefe, because it had not befallen him, as hee looked for.

9 And there hee continued many dayes: for his griefe was euer more and more, and he made account that he should die.

10 Wherefore he called for all his friends, and said vnto them, The sleepe is gone from mine eyes, and my heart faileth for very care.

11 And I thought with my selfe: Into what tribulation am I come, and how great a flood [of miserie] is it wherein now I am? for I was bountifull, and beloued in my power.

12 But now I remember the euils that I did at Ierusalem, and that I tooke all the vessels of gold and siluer that were therein, and sent to destroy the inhabitants of Iudea without a cause.

13 I perceiue therefore that for this cause these troubles are come vpon me, and behold I perish through great griefe in a strange land.

14 Then called he for Philip one of his friends whom he made ruler ouer all his realme:

15 And gaue him the crowne and his robe, and his signet, to the end hee should bring vp his sonne Antiochus, and nourish him vp for the kingdome.15

16 So king Antiochus died there in the hundreth forty and ninth yeere.

17 Now when Lysias knew that the king was dead, he set vp Antiochus his sonne (whom he had brought vp being yong) to reigne in his stead, and his name he called Eupator.

18 About this time they that were in the towre shut vp the Israelites round about the Sanctuarie, and sought alwayes their hurt, and the strengthening of the heathen.

19 Wherefore Iudas purposing to destroy them, called all the people together to besiege them.

20 So they came together, and besieged them in the hundred and fiftith yeere, and he made mounts for shot against them, and [other] engines:

21 Howbeit certaine of them that were besieged got forth, vnto whom some vngodly men of Israel ioyned themselues.

22 And they went vnto the king and said, How long will it be ere thou execute iudgement, and auenge our brethren?

23 We haue beene willing to serue thy father, and to doe as he would haue vs, and to obey his commandements.

24 For which cause they of our nation besiege the towre, and are alienated from vs: Moreouer as many of vs as they could light on, they slew, and spoiled our inheritance.

25 Neither haue they stretched out their hand against vs only, but also against all their borders.

26 And behold this day are they besieging the towre at Ierusalem to take it: the Sanctuary also, and Bethsura haue they fortified.

27 Wherefore if thou doest not preuent them quickly, they wil doe greater things then these, neither shalt thou be able to rule them.

28 Now when the king heard this, he was angry, and gathered together all his friends, and the captaines of his armie, and those that had charge of the horse.

29 There came also vnto him from other kingdomes, and from Isles of the Sea bands of hired souldiers.

30 So that the number of his armie was an hundred thousand foote men, and twentie thousand horsemen, and two and thirty Elephants exercised in battell.

31 These went through Idumea, and pitched against Bethsura which they assaulted many daies, making engines of warre: but they [of Bethsura] came out, and burnt them with fire, and fought valiantly.

32 Upon this Iudas remoued from the towre, and pitched in Bathzacharias, ouer against the kings campe.

33 Then the king rising very earely marched fiercely with his host toward Bathzacharias, where his armies made them ready to battell, and sounded the trumpets.

34 And to the end they might prouoke the elephants to fight, they shewed them the blood of grapes & mulberies.

35 Moreouer, they diuided the beasts among the armies, and for euery elephant they appointed a thousand men, armed with coats of male, and with helmets of brasse on their heads, and besides this, for euery beast were ordained fiue hundred horsemen of the best.

36 These were ready at euery occasion: wheresoeuer the beast was, and whithersoeuer þe beast went, they went also, neither departed they from him.

37 And vpon the beastes were there strong towres of wood, which couered euery one of them, and were girt fast vnto them with deuices: there were also vpon euery one two and thirtie strong men that fought vpon them, besides the Indian that ruled him.

38 As for the remnant of the horsemen they set them on this side, and that side, at the two parts of the host giuing them signes what to do, and being harnessed all ouer amidst the rankes.38

39 Now when the Sunne shone vpon the shields of golde, and brasse, the mountaines glistered therewith, and shined like lampes of fire.

40 So part of the kings armie being spred vpon the high mountaines, and part on the valleyes below, they marched on safely, and in order.

41 Wherefore all that heard the noise of their multitude, and the marching of the company, and the ratling of the harnesse, were moued: for the army was very great and mighty.

42 Then Iudas and his host drew neere, and entred into battell, and there were slaine of the kings army, sixe hundred men.

43 ¶ Eleazar also (syrnamed) Sauaran, perceiuing that one of the beasts, armed with royall harnesse, was higher then all the rest, and supposing that the king was vpon him,

44 Put himselfe in ieopardie, to the end hee might deliuer his people, and get him a perpetuall name:

45 Wherefore hee ranne vpon him courageously through the midst of the battell, slaying on the right hand, and on the left, so that they were diuided from him on both sides.45

46 Which done, he crept vnder the Elephant, and thrust him vnder and slew him: whereupon the Elephant fell downe vpon him, and there he died.

47 How be it [the rest of the Iewes] seeing the strength of the king, and the violence of his forces, turned away from them.

48 ¶ Then the kings armie went vp to Ierusalem to meet them, and the king pitched his tents against Iudea, and against mount Sion.48

49 But with them that were in Bethsura hee made peace: for they came out of the citie, because they had no victuals there, to endure the siege, it being a yeere of rest to the land.49

50 So the King tooke Bethsura, and set a garison there to keepe it.

51 As for the Sanctuarie hee besieged it many dayes: and set there artillerie with engins, and instruments to cast fire and stones, and pieces to cast darts, and slings.51

52 Whereupon they also made engins, against their engins, and helde them battell a long season.52

53 Yet at the last their vessels being without victuals, (for that it was the seuenth yeere, and they in Iudea that were deliuered from the Gentiles, had eaten vp the residue of the store)

54 There were but a few left in the Sanctuary, because the famine did so preuaile against them, that they were faine to disperse themselues, euery man to his owne place.

55 At that time Lysias heard say, that Philip (whom Antiochus the King whiles hee liued had appointed to bring vp his sonne Antiochus, that he might be king)

56 Was returned out of Persia, and Media, and the Kings host also that went with him, and that hee sought to take vnto him the ruling of the affaires.

57 Wherefore hee went in all haste, and said to the King, and the captaines of the host, and the company, Wee decay dayly, and our victuals are but small, and the place wee lay siege vnto is strong: and the affaires of the kingdome lie vpon vs.

58 Now therefore let vs be friends with these men, and make peace with them, and with all their nation.58

59 And couenant with them, that they shall liue after their Lawes, as they did before: for they are therefore displeased, & haue done all these things because wee abolished their Lawes.

60 So the King and the Princes were content: wherefore hee sent vnto them to make peace, and they accepted thereof.

61 Also the King and the Princes made an oath vnto them: whereupon they went out of the strong hold.

62 Then the King entred into mount Sion, but when hee saw the strength of the place, hee brake his oath that hee had made, and gaue commandement to pull downe the wall round about.

63 Afterward departed hee in all haste, and returned vnto Antiochia, where hee found Philip to bee master of the citie; So he fought against him, and tooke the citie by force.