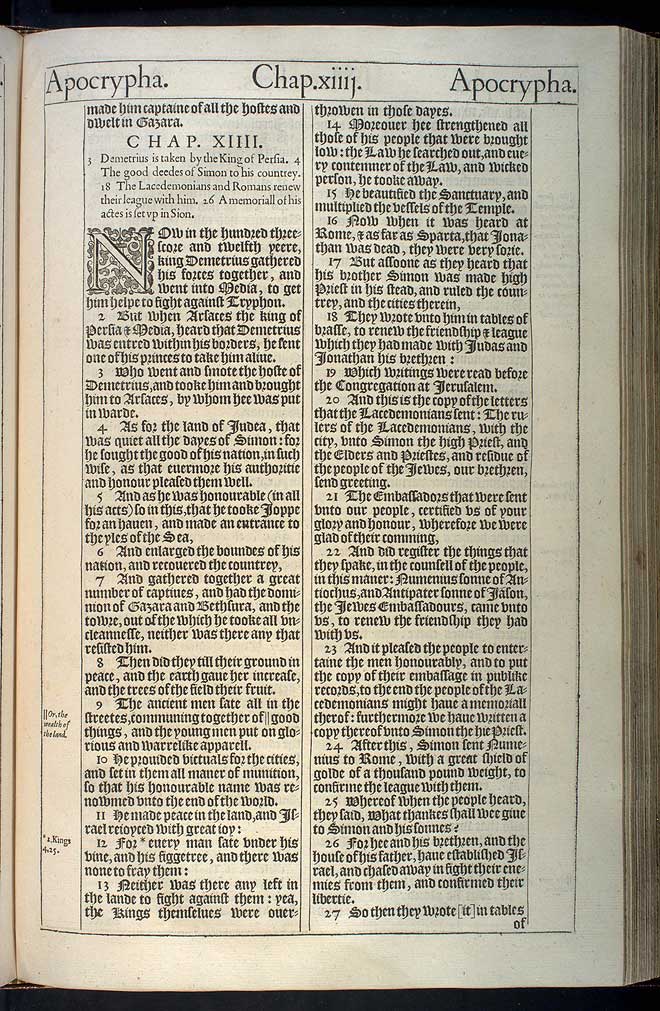 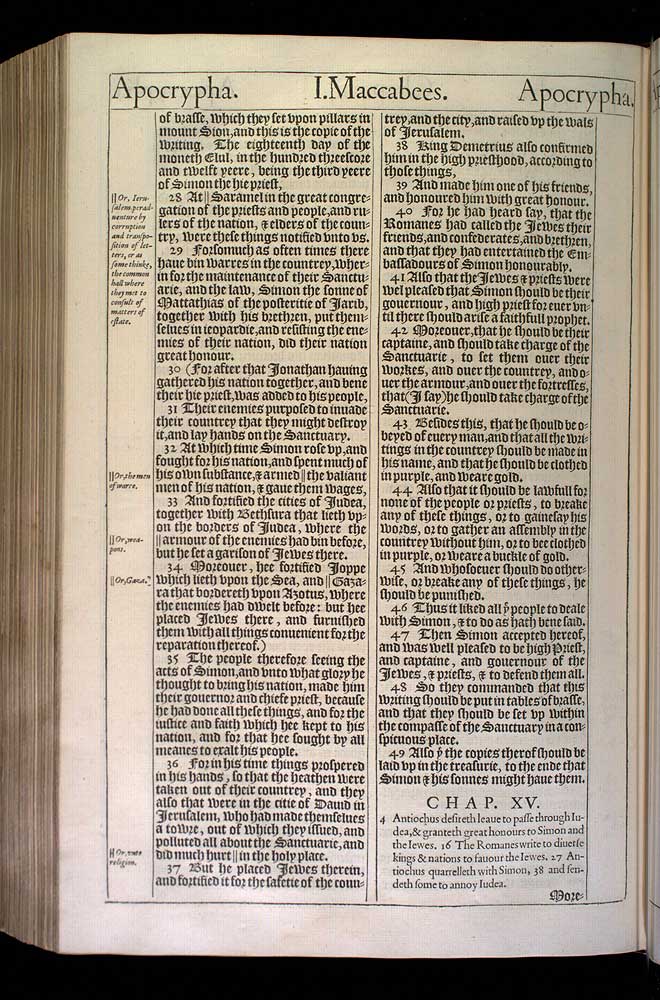 View this 1. Maccabees chapter 14 scan at a larger size

3 Demetrius is taken by the King of Persia. 4 The good deedes of Simon to his countrey. 18 The Lacedemonians and Romans renew their league with him. 26 A memoriall of his actes is set vp in Sion.

1 Now in the hundred threescore and twelfth yeere, king Demetrius gathered his forces together, and went into Media, to get him helpe to fight against Tryphon.

2 But when Arsaces the king of Persia & Media, heard that Demetrius was entred within his borders, he sent one of his princes to take him aliue.

3 Who went and smote the hoste of Demetrius, and tooke him and brought him to Arsaces, by whom hee was put in warde.

4 As for the land of Iudea, that was quiet all the dayes of Simon: for he sought the good of his nation, in such wise, as that euermore his authoritie and honour pleased them well.

5 And as he was honourable (in all his acts) so in this, that he tooke Ioppe for an hauen, and made an entrance to the yles of the Sea,

6 And enlarged the boundes of his nation, and recouered the countrey,

7 And gathered together a great number of captiues, and had the dominion of Gazara and Bethsura, and the towre, out of the which he tooke all vncleannesse, neither was there any that resisted him.

8 Then did they till their ground in peace, and the earth gaue her increase, and the trees of the field their fruit.

9 The ancient men sate all in the streetes, communing together of good things, and the young men put on glorious and warrelike apparell.9

10 He prouided victuals for the cities, and set in them all maner of munition, so that his honourable name was renowmed vnto the end of the world.

11 He made peace in the land, and Israel reioyced with great ioy:

12 For euery man sate vnder his vine, and his figgetree, and there was none to fray them:12

13 Neither was there any left in the lande to fight against them: yea, the Kings themselues were ouerthrowen in those dayes.

14 Moreouer hee strengthened all those of his people that were brought low: the Law he searched out, and euery contemner of the Law, and wicked person, he tooke away.

15 He beautified the Sanctuary, and multiplied the vessels of the Temple.

16 Now when it was heard at Rome, & as far as Sparta, that Ionathan was dead, they were very sorie.

17 But assoone as they heard that his brother Simon was made high Priest in his stead, and ruled the countrey, and the cities therein,

18 They wrote vnto him in tables of brasse, to renew the friendship & league which they had made with Iudas and Ionathan his brethren:

19 Which writings were read before the Congregation at Ierusalem.

20 And this is the copy of the letters that the Lacedemonians sent: The rulers of the Lacedemonians, with the city, vnto Simon the high Priest, and the Elders and Priestes, and residue of the people of the Iewes, our brethren, send greeting.

21 The Embassadors that were sent vnto our people, certified vs of your glory and honour, wherefore we were glad of their comming,

22 And did register the things that they spake, in the counsell of the people, in this maner: Numenius sonne of Antiochus, and Antipater sonne of Iason, the Iewes Embassadours, came vnto vs, to renew the friendship they had with vs.

23 And it pleased the people to entertaine the men honourably, and to put the copy of their embassage in publike records, to the end the people of the Lacedemonians might haue a memoriall therof: furthermore we haue written a copy thereof vnto Simon the hie Priest.

24 After this, Simon sent Numenius to Rome, with a great shield of golde of a thousand pound weight, to confirme the league with them.

25 Whereof when the people heard, they said, What thankes shall wee giue to Simon and his sonnes?

26 For hee and his brethren, and the house of his father, haue established Israel, and chased away in fight their enemies from them, and confirmed their libertie.

27 So then they wrote [it] in tables of brasse, which they set vpon pillars in mount Sion, and this is the copie of the writing. The eighteenth day of the moneth Elul, in the hundred threescore and twelft yeere, being the third yeere of Simon the hie priest,

28 At Saramel in the great congregation of the priests and people, and rulers of the nation, & elders of the country, were these things notified vnto vs.28

29 Forsomuch as often times there haue bin warres in the countrey, wherin for the maintenance of their Sanctuarie, and the law, Simon the sonne of Mattathias of the posteritie of Iarib, together with his brethren, put themselues in ieopardie, and resisting the enemies of their nation, did their nation great honour.

30 (For after that Ionathan hauing gathered his nation together, and bene their hie priest, was added to his people,

31 Their enemies purposed to inuade their countrey that they might destroy it, and lay hands on the Sanctuary.

32 At which time Simon rose vp, and fought for his nation, and spent much of his own substance, & armed the valiant men of his nation, & gaue them wages,32

33 And fortified the cities of Iudea, together with Bethsura that lieth vpon the borders of Iudea, where the armour of the enemies had bin before, but he set a garison of Iewes there.33

34 Moreouer, hee fortified Ioppe which lieth vpon the Sea, and Gazara that bordereth vpon Azotus, where the enemies had dwelt before: but hee placed Iewes there, and furnished them with all things conuenient for the reparation thereof.)34

35 The people therefore seeing the acts of Simon, and vnto what glory he thought to bring his nation, made him their gouernor and chiefe priest, because he had done all these things, and for the iustice and faith which hee kept to his nation, and for that hee sought by all meanes to exalt his people.

36 For in his time things prospered in his hands, so that the heathen were taken out of their countrey, and they also that were in the citie of Dauid in Ierusalem, who had made themselues a towre, out of which they issued, and polluted all about the Sanctuarie, and did much hurt in the holy place.36

37 But he placed Iewes therein, and fortified it for the safetie of the countrey, and the city, and raised vp the wals of Ierusalem.

38 King Demetrius also confirmed him in the high priesthood, according to those things,

39 And made him one of his friends, and honoured him with great honour.

40 For he had heard say, that the Romanes had called the Iewes their friends, and confederates, and brethren, and that they had entertained the Embassadours of Simon honourably.

41 Also that the Iewes & priests were wel pleased that Simon should be their gouernour, and high priest for euer vntil there should arise a faithfull prophet.

44 Also that it should be lawfull for none of the people or priests, to breake any of these things, or to gainesay his words, or to gather an assembly in the countrey without him, or to bee clothed in purple, or weare a buckle of gold.

45 And whosoeuer should do otherwise, or breake any of these things, he should be punished.

46 Thus it liked all þe people to deale with Simon, & to do as hath bene said.

47 Then Simon accepted hereof, and was well pleased to be high Priest, and captaine, and gouernour of the Iewes, & priests, & to defend them all.

48 So they commanded that this writing should be put in tables of brasse, and that they should be set vp within the compasse of the Sanctuary in a conspicuous place.

49 Also þt the copies therof should be laid vp in the treasurie, to the ende that Simon & his sonnes might haue them.