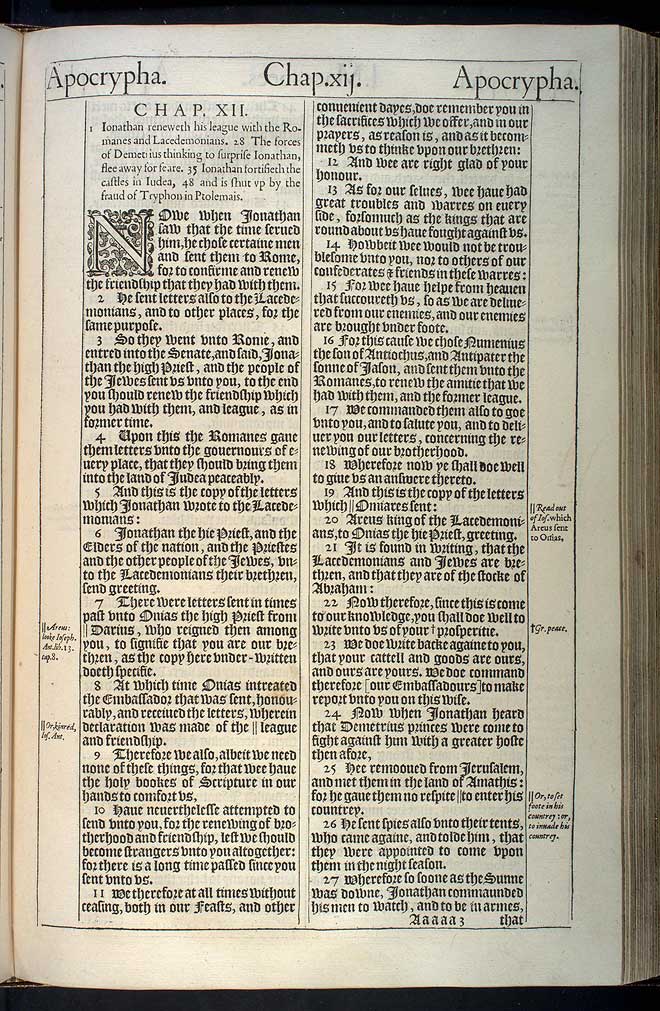 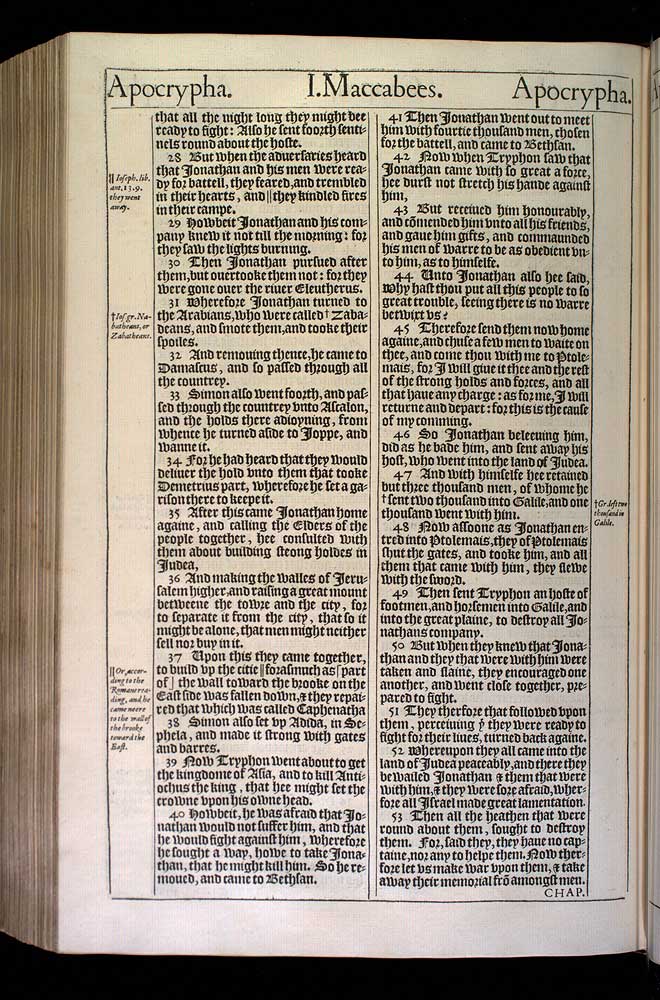 View this 1. Maccabees chapter 12 scan at a larger size

1 Ionathan reneweth his league with the Romanes and Lacedemonians. 28 The forces of Demetrius thinking to surprise Ionathan, flee away for feare. 35 Ionathan fortifieth the castles in Iudea, 48 and is shut vp by the fraud of Tryphon in Ptolemais.

1 Nowe when Ionathan saw that the time serued him, he chose certaine men and sent them to Rome, for to confirme and renew the friendship that they had with them.

2 He sent letters also to the Lacedemonians, and to other places, for the same purpose.

3 So they went vnto Rome, and entred into the Senate, and said, Ionathan the high Priest, and the people of the Iewes sent vs vnto you, to the end you should renew the friendship which you had with them, and league, as in former time.

4 Upon this the Romanes gaue them letters vnto the gouernours of euery place, that they should bring them into the land of Iudea peaceably.

5 And this is the copy of the letters which Ionathan wrote to the Lacedemonians:

6 Ionathan the hie Priest, and the Elders of the nation, and the Priestes and the other people of the Iewes, vnto the Lacedemonians their brethren, send greeting.

7 There were letters sent in times past vnto Onias the high Priest from Darius, who reigned then among you, to signifie that you are our brethren, as the copy here vnder-written doeth specifie.7

8 At which time Onias intreated the Embassador that was sent, honourably, and receiued the letters, wherein declaration was made of the league and friendship.8

9 Therefore we also, albeit we need none of these things, for that wee haue the holy bookes of Scripture in our hands to comfort vs,

10 Haue neuerthelesse attempted to send vnto you, for the renewing of brotherhood and friendship, lest we should become strangers vnto you altogether: for there is a long time passed since you sent vnto vs.

11 We therefore at all times without ceasing, both in our Feasts, and other conuenient dayes, doe remember you in the sacrifices which we offer, and in our prayers, as reason is, and as it becommeth vs to thinke vpon our brethren:

12 And wee are right glad of your honour.

13 As for our selues, wee haue had great troubles and warres on euery side, forsomuch as the kings that are round about vs haue fought against vs.

14 Howbeit wee would not be troublesome vnto you, nor to others of our confederates & friends in these warres:

15 For wee haue helpe from heauen that succoureth vs, so as we are deliuered from our enemies, and our enemies are brought vnder foote.

16 For this cause we chose Numenius the son of Antiochus, and Antipater the sonne of Iason, and sent them vnto the Romanes, to renew the amitie that we had with them, and the former league.

17 We commanded them also to goe vnto you, and to salute you, and to deliuer you our letters, concerning the renewing of our brotherhood.

18 Wherefore now ye shall doe well to giue vs an answere thereto.

19 And this is the copy of the letters which Omiares sent:19

20 Areus king of the Lacedemonians, to Onias the hie Priest, greeting.

21 It is found in writing, that the Lacedemonians and Iewes are brethren, and that they are of the stocke of Abraham:

22 Now therefore, since this is come to our knowledge, you shall doe well to write vnto vs of your prosperitie.22

23 We doe write backe againe to you, that your cattell and goods are ours, and ours are yours. We doe command therefore [our Embassadours] to make report vnto you on this wise.

24 Now when Ionathan heard that Demetrius princes were come to fight against him with a greater hoste then afore,

25 Hee remooued from Ierusalem, and met them in the land of Amathis: for he gaue them no respite to enter his countrey.25

26 He sent spies also vnto their tents, who came againe, and tolde him, that they were appointed to come vpon them in the night season.

27 Wherefore so soone as the Sunne was downe, Ionathan commaunded his men to watch, and to be in armes, that all the night long they might bee ready to fight: Also he sent foorth sentinels round about the hoste.

28 But when the aduersaries heard that Ionathan and his men were ready for battell, they feared, and trembled in their hearts, and they kindled fires in their campe.28

29 Howbeit Ionathan and his company knew it not till the morning: for they saw the lights burning.

30 Then Ionathan pursued after them, but ouertooke them not: for they were gone ouer the riuer Eleutherus.

31 Wherefore Ionathan turned to the Arabians, who were called Zabadeans, and smote them, and tooke their spoiles.31

32 And remouing thence, he came to Damascus, and so passed through all the countrey.

33 Simon also went foorth, and passed through the countrey vnto Ascalon, and the holds there adioyning, from whence he turned aside to Ioppe, and wanne it.

34 For he had heard that they would deliuer the hold vnto them that tooke Demetrius part, wherefore he set a garison there to keepe it.

35 After this came Ionathan home againe, and calling the Elders of the people together, hee consulted with them about building strong holdes in Iudea,

36 And making the walles of Ierusalem higher, and raising a great mount betweene the towre and the city, for to separate it from the city, that so it might be alone, that men might neither sell nor buy in it.

37 Upon this they came together, to build vp the citie forasmuch as [part of] the wall toward the brooke on the East side was fallen down, & they repaired that which was called Caphenatha37

38 Simon also set vp Adida, in Sephela, and made it strong with gates and barres.

39 Now Tryphon went about to get the kingdome of Asia, and to kill Antiochus the king, that hee might set the crowne vpon his owne head.

40 Howbeit, he was afraid that Ionathan would not suffer him, and that he would fight against him, wherefore he sought a way, howe to take Ionathan, that he might kill him. So he remoued, and came to Bethsan.

41 Then Ionathan went out to meet him with fourtie thousand men, chosen for the battell, and came to Bethsan.

42 Now when Tryphon saw that Ionathan came with so great a force, hee durst not stretch his hande against him,

43 But receiued him honourably, and cōmended him vnto all his friends, and gaue him gifts, and commaunded his men of warre to be as obedient vnto him, as to himselfe.

44 Unto Ionathan also hee said, Why hast thou put all this people to so great trouble, seeing there is no warre betwixt vs?

45 Therefore send them now home againe, and chuse a few men to waite on thee, and come thou with me to Ptolemais, for I will giue it thee and the rest of the strong holds and forces, and all that haue any charge: as for me, I will returne and depart: for this is the cause of my comming.

46 So Ionathan beleeuing him, did as he bade him, and sent away his host, who went into the land of Iudea.

47 And with himselfe hee retained but three thousand men, of whome he sent two thousand into Galile, and one thousand went with him.47

48 Now assoone as Ionathan entred into Ptolemais, they of Ptolemais shut the gates, and tooke him, and all them that came with him, they shewe with the sword.

49 Then sent Tryphon an hoste of footmen, and horsemen into Galile, and into the great plaine, to destroy all Ionathans company.

50 But when they knew that Ionathan and they that were with him were taken and slaine, they encouraged one another, and went close together, prepared to fight.

51 They therfore that followed vpon them, perceiuing þt they were ready to fight for their liues, turned back againe.

52 Whereupon they all came into the land of Iudea peaceably, and there they bewailed Ionathan & them that were with him, & they were sore afraid, wherfore all Israel made great lamentation.

53 Then all the heathen that were round about them, sought to destroy them. For, said they, they haue no captaine, nor any to helpe them. Now therfore let vs make war vpon them, & take away their memorial frō amongst men.