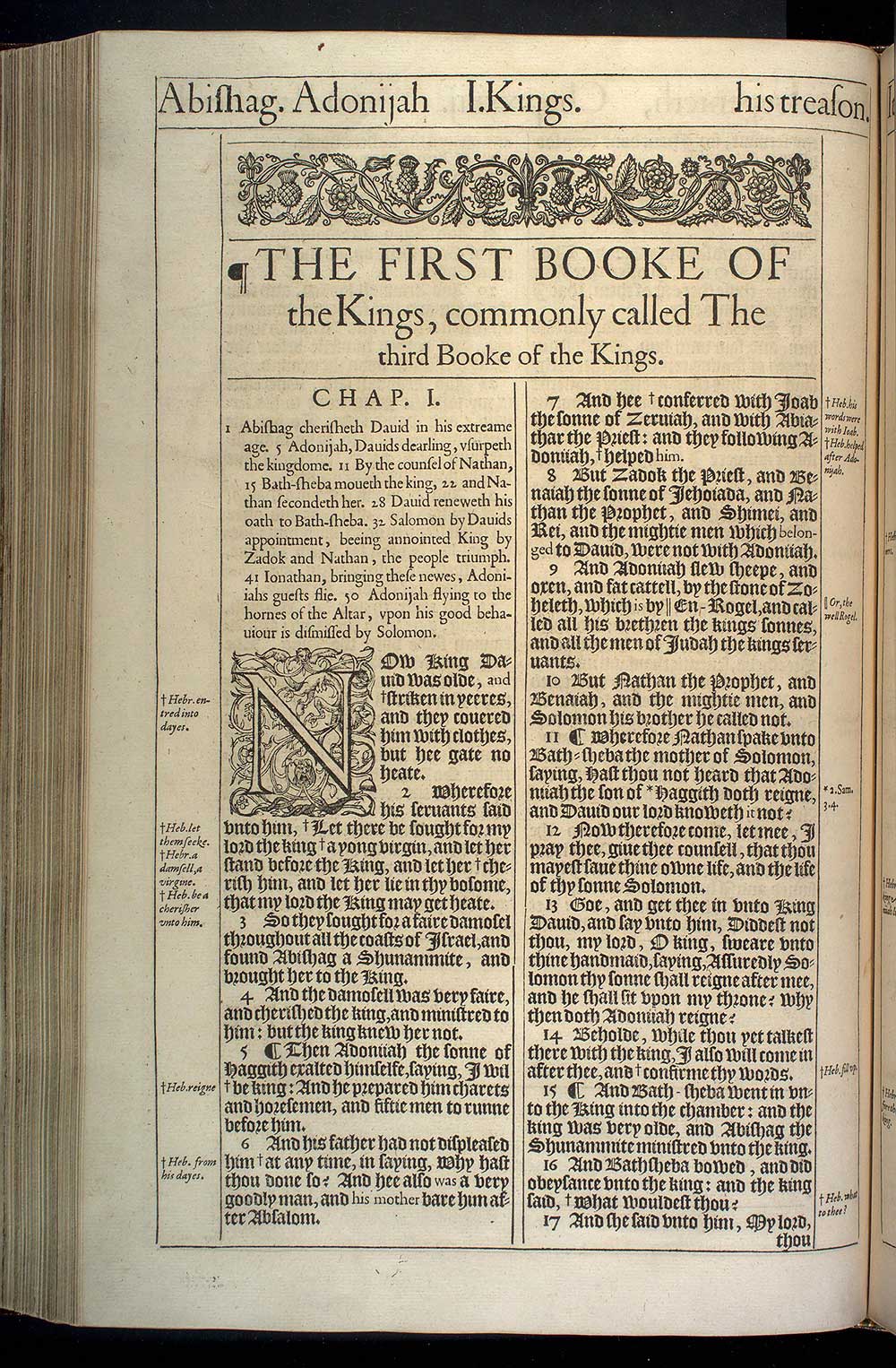 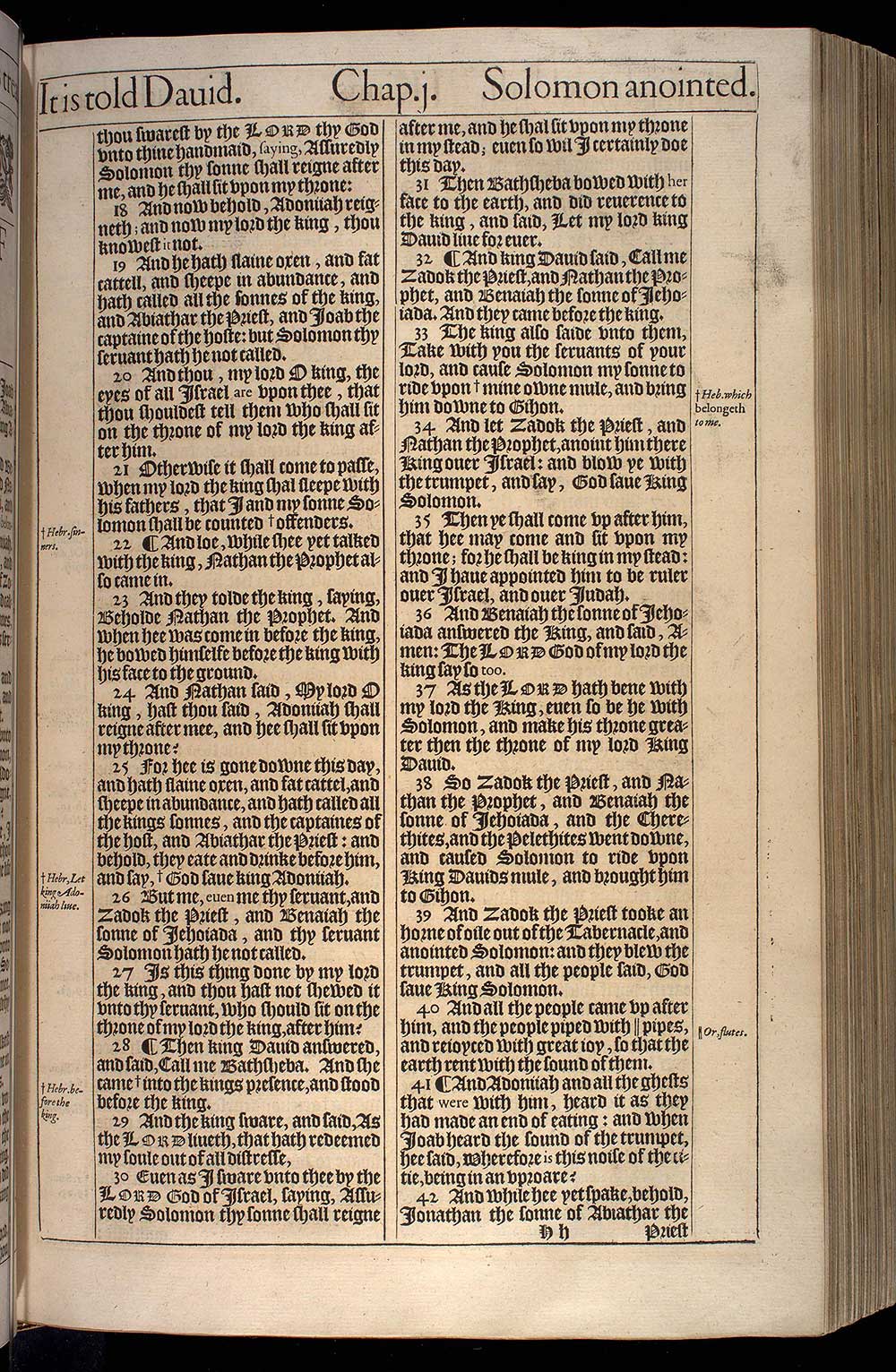 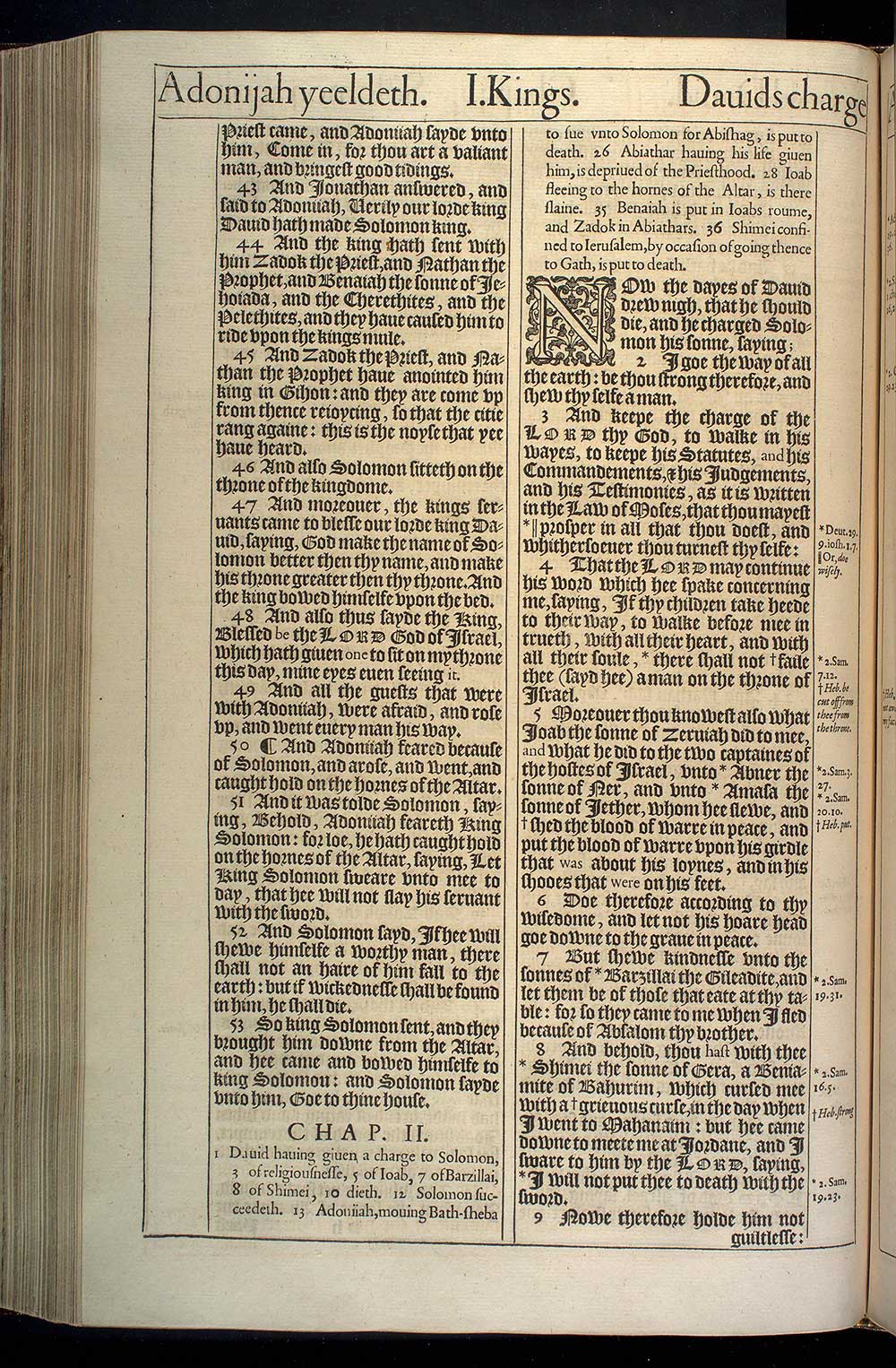 1 Abishag cherisheth Dauid in his extreame age. 5 Adonijah, Dauids dearling, vsurpeth the kingdome. 11 By the counsel of Nathan, 15 Bath-sheba moueth the king, 22 and Nathan secondeth her. 28 Dauid reneweth his oath to Bath-sheba. 32 Salomon by Dauids appointment, beeing annointed King by Zadok and Nathan, the people triumph. 41 Ionathan, bringing these newes, Adoniiahs guests flie. 50 Adonijah flying to the hornes of the Altar, vpon his good behauiour is dismissed by Solomon.

1Now King Dauid was olde, and striken in yeeres, and they couered him with clothes, but hee gate no heate.1

3So they sought for a faire damosel throughout all the coasts of Israel, and found Abishag a Shunammite, and brought her to the King.

4And the damosell was very faire, and cherished the king, and ministred to him: but the king knew her not.

5¶ Then Adoniiah the sonne of Haggith exalted himselfe, saying, I wil be king: And he prepared him charets and horesemen, and fiftie men to runne before him.5

6And his father had not displeased him at any time, in saying, Why hast thou done so? And hee also was a very goodly man, and his mother bare him after Absalom.6

7And hee conferred with Ioab the sonne of Zeruiah, and with Abiathar the Priest: and they following Adoniiah, helped him.7

8But Zadok the Priest, and Benaiah the sonne of Iehoiada, and Nathan the Prophet, and Shimei, and Rei, and the mightie men which belonged to Dauid, were not with Adoniiah.

9And Adoniiah slew sheepe, and oxen, and fat cattell, by the stone of Zoheleth, which is by En-Rogel, and called all his brethren the kings sonnes, and all the men of Iudah the kings seruants.9

10But Nathan the Prophet, and Benaiah, and the mightie men, and Solomon his brother he called not.

11¶ Wherefore Nathan spake vnto Bath-sheba the mother of Solomon, saying, Hast thou not heard that Adoniiah the son of Haggith doth reigne, and Dauid our lord knoweth it not?11

13Goe, and get thee in vnto King Dauid, and say vnto him, Diddest not thou, my lord, O king, sweare vnto thine handmaid, saying, Assuredly Solomon thy sonne shall reigne after mee, and he shall sit vpon my throne? why then doth Adoniiah reigne?

14Beholde, while thou yet talkest there with the king, I also will come in after thee, and confirme thy words.14

15¶ And Bath-sheba went in vnto the King into the chamber: and the king was very olde, and Abishag the Shunammite ministred vnto the king.

16And Bathsheba bowed, and did obeysance vnto the king: and the king said, What wouldest thou?16

It is told Dauid.

17And she said vnto him, My lord, thou swarest by the Lord thy God vnto thine handmaid, saying, Assuredly Solomon thy sonne shall reigne after me, and he shall sit vpon my throne:

18And now behold, Adoniiah reigneth; and now my lord the king, thou knowest it not.

19And he hath slaine oxen, and fat cattell, and sheepe in abundance, and hath called all the sonnes of the king, and Abiathar the Priest, and Ioab the captaine of the hoste: but Solomon thy seruant hath he not called.

20And thou, my lord O king, the eyes of all Israel are vpon thee, that thou shouldest tell them who shall sit on the throne of my lord the king after him.

21Otherwise it shall come to passe, when my lord the king shal sleepe with his fathers, that I and my sonne Solomon shall be counted offenders.21

22¶ And loe, while shee yet talked with the king, Nathan the Prophet also came in.

24And Nathan said, My lord O king, hast thou said, Adoniiah shall reigne after mee, and hee shall sit vpon my throne?

25For hee is gone downe this day, and hath slaine oxen, and fat cattel, and sheepe in abundance, and hath called all the kings sonnes, and the captaines of the host, and Abiathar the Priest: and behold, they eate and drinke before him, and say, God saue king Adoniiah.25

26But me, euen me thy seruant, and Zadok the Priest, and Benaiah the sonne of Iehoiada, and thy seruant Solomon hath he not called.

28¶ Then king Dauid answered, and said, Call me Bathsheba. And she came into the kings presence, and stood before the king.28

29And the king sware, and said, As the Lord liueth, that hath redeemed my soule out of all distresse,

30Euen as I sware vnto thee by the Lord God of Israel, saying, Assuredly Solomon thy sonne shall reigne after me, and he shal sit vpon my throne in my stead; euen so wil I certainly doe this day.

31Then Bathsheba bowed with her face to the earth, and did reuerence to the king, and said, Let my lord king Dauid liue for euer.

32¶ And king Dauid said, Call me Zadok the Priest, and Nathan the Prophet, and Benaiah the sonne of Iehoiada. And they came before the king.

33The king also saide vnto them, Take with you the seruants of your lord, and cause Solomon my sonne to ride vpon mine owne mule, and bring him downe to Gihon.33

34And let Zadok the Priest, and Nathan the Prophet, anoint him there King ouer Israel: and blow ye with the trumpet, and say, God saue King Solomon.

35Then ye shall come vp after him, that hee may come and sit vpon my throne; for he shall be king in my stead: and I haue appointed him to be ruler ouer Israel, and ouer Iudah.

36And Benaiah the sonne of Iehoiada answered the King, and said, Amen: The Lord God of my lord the king say so too.

37As the Lord hath bene with my lord the King, euen so be he with Solomon, and make his throne greater then the throne of my lord King Dauid.

38So Zadok the Priest, and Nathan the Prophet, and Benaiah the sonne of Iehoiada, and the Cherethites, and the Pelethites went downe, and caused Solomon to ride vpon King Dauids mule, and brought him to Gihon.

39And Zadok the Priest tooke an horne of oile out of the Tabernacle, and anointed Solomon: and they blew the trumpet, and all the people said, God saue King Solomon.

40And all the people came vp after him, and the people piped with pipes, and reioyced with great ioy, so that the earth rent with the sound of them.40

41¶ And Adoniiah and all the ghests that were with him, heard it as they had made an end of eating: and when Ioab heard the sound of the trumpet, hee said, Wherefore is this noise of the citie, being in an vproare?

42And while hee yet spake, behold, Ionathan the sonne of Abiathar the Priest came, and Adoniiah sayde vnto him, Come in, for thou art a valiant man, and bringest good tidings.

43And Ionathan answered, and said to Adoniiah, Uerily our lorde king Dauid hath made Solomon king.

44And the king hath sent with him Zadok the Priest, and Nathan the Prophet, and Benaiah the sonne of Iehoiada, and the Cherethites, and the Pelethites, and they haue caused him to ride vpon the kings mule.

45And Zadok the Priest, and Nathan the Prophet haue anointed him king in Gihon: and they are come vp from thence reioycing, so that the citie rang againe: this is the noyse that yee haue heard.

46And also Solomon sitteth on the throne of the kingdome.

47And moreouer, the kings seruants came to blesse our lorde king Dauid, saying, God make the name of Solomon better then thy name, and make his throne greater then thy throne. And the king bowed himselfe vpon the bed.

48And also thus sayde the King, Blessed be the Lord God of Israel, which hath giuen one to sit on my throne this day, mine eyes euen seeing it.

49And all the guests that were with Adoniiah, were afraid, and rose vp, and went euery man his way.

50¶ And Adoniiah feared because of Solomon, and arose, and went, and caught hold on the hornes of the Altar.

51And it was tolde Solomon, saying, Behold, Adoniiah feareth King Solomon: for loe, he hath caught hold on the hornes of the Altar, saying, Let King Solomon sweare vnto mee to day, that hee will not slay his seruant with the sword.

52And Solomon sayd, If hee will shewe himselfe a worthy man, there shall not an haire of him fall to the earth: but if wickednesse shall be found in him, he shall die.

53So king Solomon sent, and they brought him downe from the Altar, and hee came and bowed himselfe to king Solomou: and Solomon sayde vnto him, Goe to thine house.