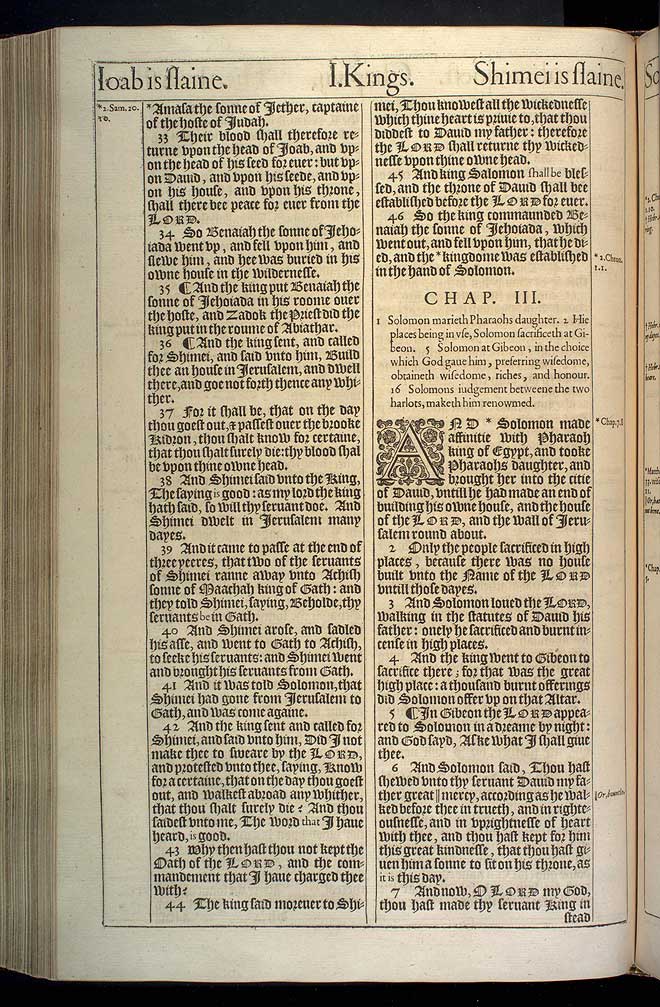 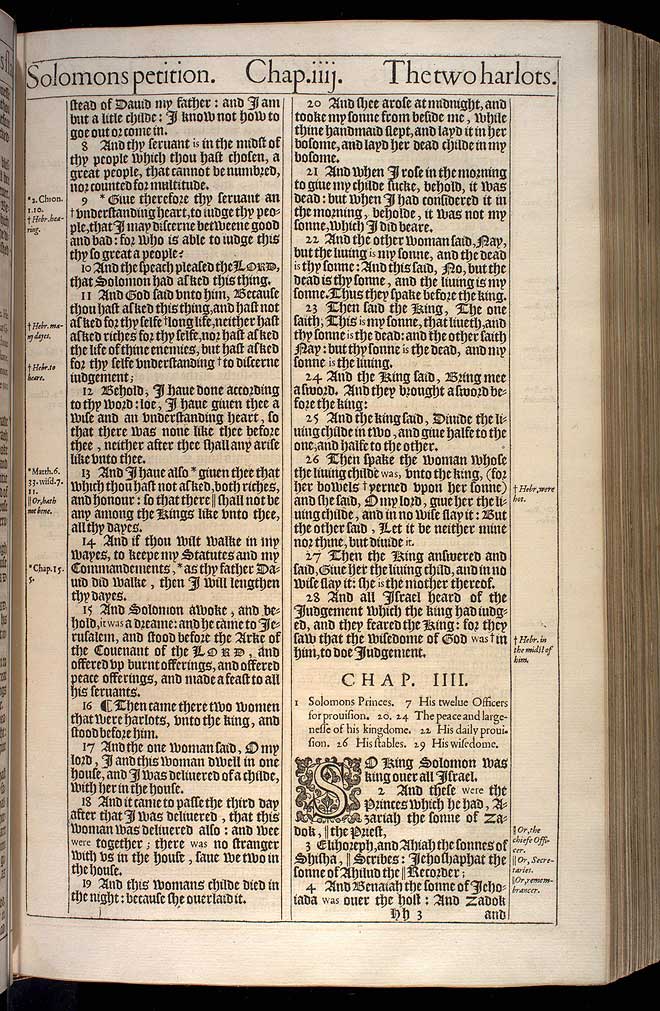 View this 1. Kings chapter 3 scan at a larger size

1 And Solomon made affinitie with Pharaoh king of Egypt, and tooke Pharaohs daughter, and brought her into the citie of Dauid, vntill he had made an end of building his owne house, and the house of the Lord, and the wall of Ierusalem round about.1

2 Only the people sacrificed in high places, because there was no house built vnto the Name of the Lord vntill those dayes.

3 And Solomon loued the Lord, walking in the statutes of Dauid his father: onely he sacrificed and burnt incense in high places.

4 And the king went to Gibeon to sacrifice there; for that was the great high place: a thousand burnt offerings did Solomon offer vp on that Altar.

5 ¶ In Gibeon the Lord appeared to Solomon in a dreame by night: and God sayd, Aske what I shall giue thee.

6 And Solomon said, Thou hast shewed vnto thy seruant Dauid my father great mercy, according as he walked before thee in trueth, and in righteousnesse, and in vprightnesse of heart with thee, and thou hast kept for him this great kindnesse, that thou hast giuen him a sonne to sit on his throne, as it is this day.6

7 And now, O Lord my God, thou hast made thy seruant King in stead of Dauid my father: and I am but a litle childe: I know not how to goe out or come in.

8 And thy seruant is in the midst of thy people which thou hast chosen, a great people, that cannot be numbred, nor counted for multitude.

9 Giue therefore thy seruant an understanding heart, to iudge thy people, that I may discerne betweene good and bad: for who is able to iudge this thy so great a people?9

10 And the speach pleased the Lord, that Solomon had asked this thing.

12 Behold, I haue done according to thy word: loe, I haue giuen thee a wise and an vnderstanding heart, so that there was none like thee before thee, neither after thee shall any arise like vnto thee.

13 And I haue also giuen thee that which thou hast not asked, both riches, and honour: so that there shall not be any among the Kings like vnto thee, all thy dayes.13

14 And if thou wilt walke in my wayes, to keepe my Statutes and my Commandements, as thy father Dauid did walke, then I will lengthen thy dayes.14

16 ¶ Then came there two women that were harlots, vnto the king, and stood before him.

17 And the one woman said, O my lord, I and this woman dwell in one house, and I was deliuered of a childe, with her in the house.

18 And it came to passe the third day after that I was deliuered, that this woman was deliuered also: and wee were together; there was no stranger with vs in the house, saue we two in the house.

19 And this womans childe died in the night: because she ouerlaid it.

20 And shee arose at midnight, and tooke my sonne from beside me, while thine handmaid slept, and layd it in her bosome, and layd her dead childe in my bosome.

21 And when I rose in the morning to giue my childe sucke, behold, it was dead: but when I had considered it in the morning, beholde, it was not my sonne, which I did beare.

24 And the King said, Bring mee a sword. And they brought a sword before the king:

26 Then spake the woman whose the liuing childe was, vnto the king, (for her bowels yerned vpon her sonne) and she said, O my lord, giue her the liuing childe, and in no wise slay it: But the other said, Let it be neither mine nor thine, but diuide it.26

27 Then the King answered and said, Giue her the liuing child, and in no wise slay it: she is the mother thereof.

28 And all Israel heard of the Iudgement which the king had iudged, and they feared the King: for they saw that the wisedome of God was in him, to doe Iudgement.28