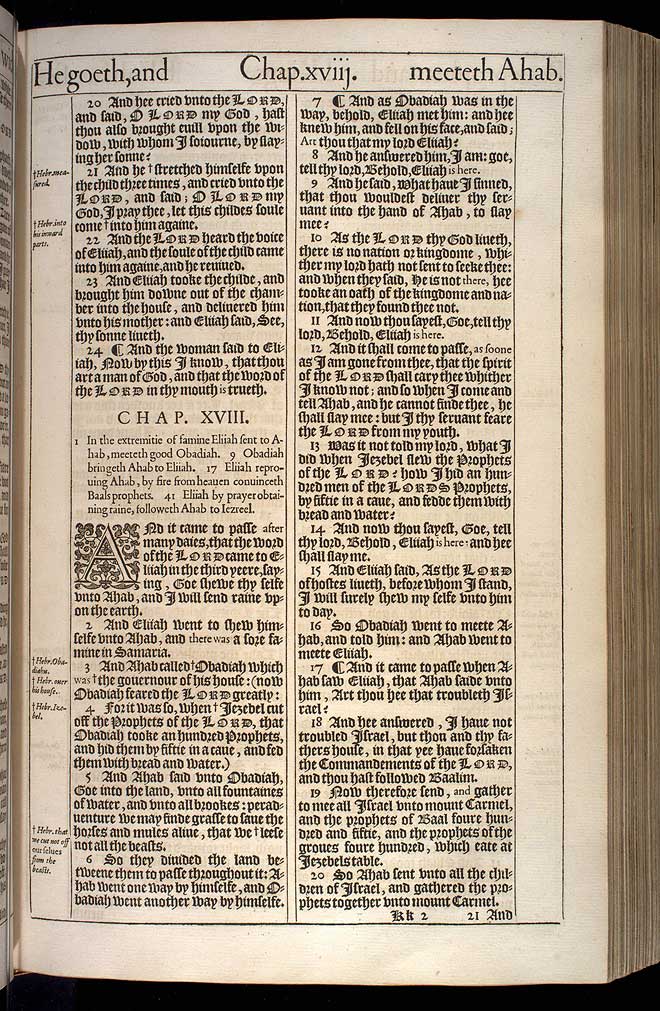 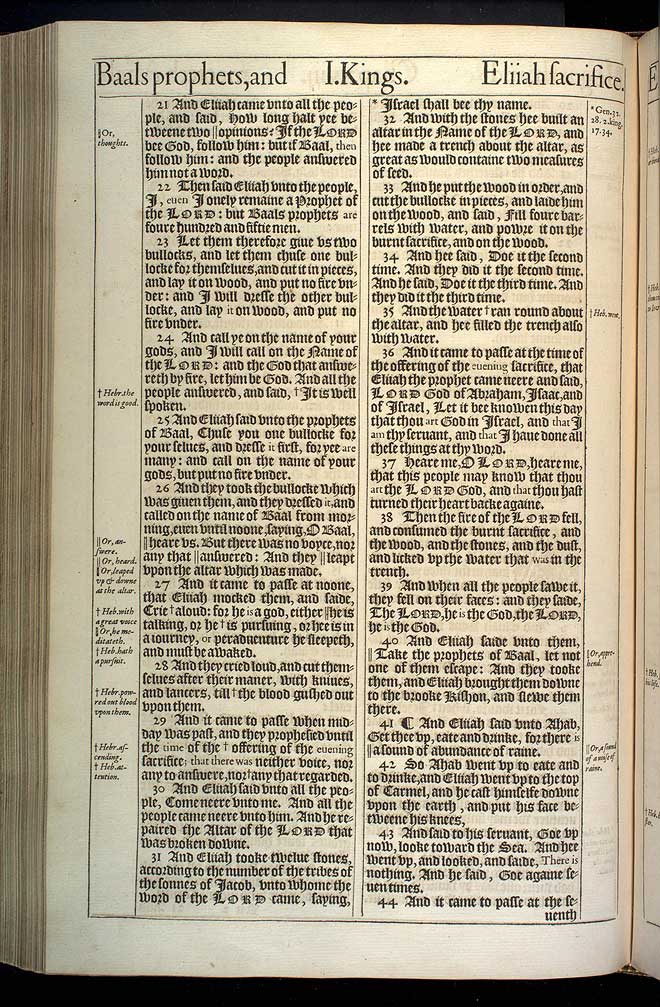 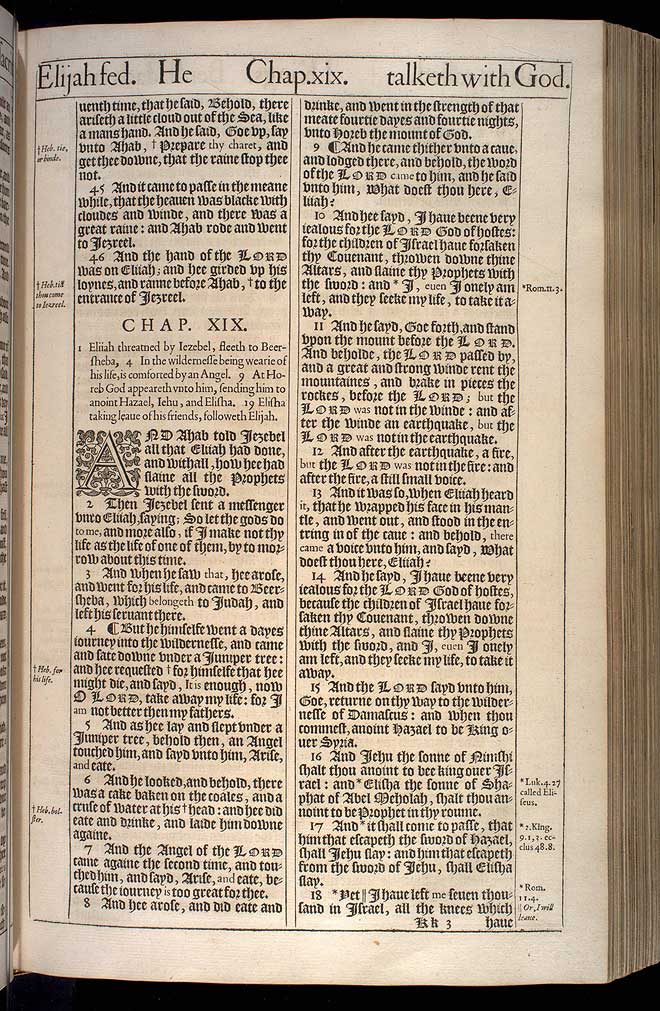 View this 1. Kings chapter 18 scan at a larger size

1 And it came to passe after many daies, that the word of the Lord came to Eliiah in the third yeere, saying, Goe shewe thy selfe vnto Ahab, and I will send raine vpon the earth.

2 And Eliiah went to shew himselfe vnto Ahab, and there was a sore famine in Samaria.

3 And Ahab called Obadiah which was the gouernour of his house: (now Obadiah feared the Lord greatly:3

4 For it was so, when Iezebel cut off the Prophets of the Lord, that Obadiah tooke an hundred Prophets, and hid them by fiftie in a caue, and fed them with bread and water.)4

5 And Ahab said vnto Obadiah, Goe into the land, vnto all fountaines of water, and vnto all brookes: peraduenture we may finde grasse to saue the horses and mules aliue, that we leese not all the beasts.5

7 ¶ And as Obadiah was in the way, behold, Eliiah met him: and hee knew him, and fell on his face, and said; Art thou that my lord Eliiah?

8 And he answered him, I am: goe, tell thy lord, Behold, Eliiah is here.

9 And he said, What haue I sinned, that thou wouldest deliuer thy seruant into the hand of Ahab, to slay mee?

10 As the Lord thy God liueth, there is no nation or kingdome, whither my lord hath not sent to seeke thee: and when they said, He is not there, hee tooke an oath of the kingdome and nation, that they found thee not.

11 And now thou sayest, Goe, tell thy lord, Behold, Eliiah is here.

12 And it shall come to passe, as soone as I am gone from thee, that the spirit of the Lord shall cary thee whither I know not; and so when I come and tell Ahab, and he cannot finde thee, he shall slay mee: but I thy seruant feare the Lord from my youth.

13 Was it not told my lord, what I did when Iezebel slew the Prophets of the Lord ? How I hid an hundred men of the Lords Prophets, by fiftie in a caue, and fedde them with bread and water?

14 And now thou sayest, Goe, tell thy lord, Behold, Eliiah is here: and hee shall slay me.

15 And Eliiah said, As the Lord of hostes liueth, before whom I stand, I will surely shew my selfe vnto him to day.

17 ¶ And it came to passe when Ahab saw Eliiah, that Ahab saide vnto him, Art thou hee that troubleth Israel?

18 And hee answered, I haue not troubled Israel, but thou and thy fathers house, in that yee haue forsaken the Commandements of the Lord, and thou hast followed Baalim.

20 So Ahab sent vnto all the children of Israel, and gathered the prophets together vnto mount Carmel.

21 And Eliiah came vnto all the people, and said, how long halt yee betweene two opinions? If the Lord bee God, follow him: but if Baal, then follow him: and the people answered him not a word.21

22 Then said Eliiah vnto the people, I, euen I onely remaine a Prophet of the Lord: but Baals prophets are foure hundred and fiftie men.

24 And call ye on the name of your gods, and I will call on the Name of the Lord: and the God that answereth by fire, let him be God. And all the people answered, and said, It is well spoken.24

25 And Eliiah said vnto the prophets of Baal, Chuse you one bullocke for your selues, and dresse it first, for yee are many: and call on the name of your gods, but put no fire vnder.

26 And they took the bullocke which was giuen them, and they dressed it, and called on the name of Baal from morning, euen vntil noone, saying, O Baal, heare vs. But there was no voyce, nor any that answered: And they leapt vpon the altar which was made.26

27 And it came to passe at noone, that Eliiah mocked them, and saide, Crie aloud: for he is a god, either he is talking, or he is pursuing, or hee is in a iourney, or peraduenture he sleepeth, and must be awaked.27

28 And they cried loud, and cut themselues after their maner, with kniues, and lancers, till the blood gushed out vpon them.28

29 And it came to passe when midday was past, and they prophesied vntil the time of the offering of the euening sacrifice; that there was neither voice, nor any to answere, nor any that regarded.29

31 And Eliiah tooke twelue stones, according to the number of the tribes of the sonnes of Iacob, vnto whome the word of the Lord came, saying, Israel shall bee thy name.31

32 And with the stones hee built an altar in the Name of the Lord, and hee made a trench about the altar, as great as would containe two measures of seed.

33 And he put the wood in order, and cut the bullocke in pieces, and laide him on the wood, and said, Fill foure barrels with water, and powre it on the burnt sacrifice, and on the wood.

35 And the water ran round about the altar, and hee filled the trench also with water.35

36 And it came to passe at the time of the offering of the euening sacrifice, that Eliiah the prophet came neere and said, Lord God of Abraham, Isaac, and of Israel, Let it bee knowen this day that thou art God in Israel, and that I am thy seruant, and that I haue done all these things at thy word.

37 Heare me, O Lord, heare me, that this people may know that thou art the Lord God, and that thou hast turned their heart backe againe.

38 Then the fire of the Lord fell, and consumed the burnt sacrifice, and the wood, and the stones, and the dust, and licked vp the water that was in the trench.

40 And Eliiah saide vnto them, Take the prophets of Baal, let not one of them escape: And they tooke them, and Eliiah brought them downe to the brooke Kishon, and slewe them there.40

41 ¶ And Eliiah said vnto Ahab, Get thee vp, eate and drinke, for there is a sound of abundance of raine.41

42 So Ahab went vp to eate and to drinke, and Eliiah went vp to the top of Carmel, and he cast himselfe downe vpon the earth, and put his face betweene his knees,

43 And said to his seruant, Goe vp now, looke toward the Sea. And hee went vp, and looked, and saide, There is nothing. And he said, Goe againe seuen times.

44 And it came to passe at the seuenth time, that he said, Behold, there ariseth a little cloud out of the Sea, like a mans hand. And he said, Goe vp, say vnto Ahab, Prepare thy charet, and get thee downe, that the raine stop thee not.44

45 And it came to passe in the meane while, that the heauen was blacke with cloudes and winde, and there was a great raine: and Ahab rode and went to Iezreel.

46 And the hand of the Lord was on Eliiah; and hee girded vp his loynes, and ranne before Ahab, to the entrance of Iezreel.46