And Solomon made affinity with Pharaoh king of Egypt, and took Pharaoh's daughter, and brought her into the city of David, until he had made an end of building his own house, and the house of the LORD, and the wall of Jerusalem round about. 2 Only the people sacrificed in high places, because there was no house built unto the name of the LORD, until those days.

3 And Solomon loved the LORD, walking in the statutes of David his father: only he sacrificed and burnt incense in high places. 4 And the king went to Gibeon to sacrifice there; for that was the great high place: a thousand burnt offerings did Solomon offer upon that altar. 5 In Gibeon the LORD appeared to Solomon in a dream by night: and God said, Ask what I shall give thee.

6 And Solomon said, Thou hast shewed unto thy servant David my father great mercy, according as he walked before thee in truth, and in righteousness, and in uprightness of heart with thee; and thou hast kept for him this great kindness, that thou hast given him a son to sit on his throne, as it is this day. 7 And now, O LORD my God, thou hast made thy servant king instead of David my father: and I am but a little child: I know not how to go out or come in. 8 And thy servant is in the midst of thy people which thou hast chosen, a great people, that cannot be numbered nor counted for multitude. 9 Give therefore thy servant an understanding heart to judge thy people, that I may discern between good and bad: for who is able to judge this thy so great a people?

10 And the speech pleased the Lord, that Solomon had asked this thing. 11 And God said unto him, Because thou hast asked this thing, and hast not asked for thyself long life; neither hast asked riches for thyself, nor hast asked the life of thine enemies; but hast asked for thyself understanding to discern judgment; 12 Behold, I have done according to thy words: lo, I have given thee a wise and an understanding heart; so that there was none like thee before thee, neither after thee shall any arise like unto thee. 13 And I have also given thee that which thou hast not asked, both riches, and honour: so that there shall not be any among the kings like unto thee all thy days. 14 And if thou wilt walk in my ways, to keep my statutes and my commandments, as thy father David did walk, then I will lengthen thy days.

16 Then came there two women, that were harlots, unto the king, and stood before him. 17 And the one woman said, O my lord, I and this woman dwell in one house; and I was delivered of a child with her in the house. 18 And it came to pass the third day after that I was delivered, that this woman was delivered also: and we were together; there was no stranger with us in the house, save we two in the house. 19 And this woman's child died in the night; because she overlaid it. 20 And she arose at midnight, and took my son from beside me, while thine handmaid slept, and laid it in her bosom, and laid her dead child in my bosom. 21 And when I rose in the morning to give my child suck, behold, it was dead: but when I had considered it in the morning, behold, it was not my son, which I did bear. 22 And the other woman said, Nay; but the living is my son, and the dead is thy son. And this said, No; but the dead is thy son, and the living is my son. Thus they spake before the king.

Solomon's marriage. (1-4) His vision, His prayer for wisdom. (5-15) The judgment of Solomon. (16-28)1-4 He that loved the Lord, should, for his sake, have fixed his love upon one of the Lord's people. Solomon was a wise man, a rich man, a great man; yet the brightest praise of him, is that which is the character of all the saints, even the poorest, "He loved the Lord." Where God sows plentifully, he expects to reap accordingly; and those that truly love God and his worship, will not grudge the expenses of their religion. We must never think that wasted which is laid out in the service of God.

5-15 Solomon's dream was not a common one. While his bodily powers were locked up in sleep, the powers of his soul were strengthened; he was enabled to receive the Divine vision, and to make a suitable choice. God, in like manner, puts us in the ready way to be happy, by assuring us we shall have what we need, and pray for. Solomon's making such a choice when asleep, and the powers of reason least active, showed it came from the grace of God. Having a humble sense of his own wants and weakness, he pleads, Lord, I am but a little child. The more wise and considerate men are, the better acquainted they are with their own weakness, and the more jealous of themselves. Solomon begs of God to give him wisdom. We must pray for it, #Jas 1:5|, that it may help us in our particular calling, and the various occasions we have. Those are accepted of God, who prefer spiritual blessings to earthly good. It was a prevailing prayer, and prevailed for more than he asked. God gave him wisdom, such as no other prince was ever blessed with; and also gave him riches and honour. If we make sure of wisdom and grace, these will bring outward prosperity with them, or sweeten the want of it. The way to get spiritual blessings, is to wrestle with God in prayer for them. The way to get earthly blessings, is to refer ourselves to God concerning them. Solomon has wisdom given him, because he did ask it, and wealth, because he did not.

16-28 An instance of Solomon's wisdom is given. Notice the difficulty of the case. To find out the true mother, he could not try which the child loved best, and therefore tried which loved the child best: the mother's sincerity will be tried, when the child is in danger. Let parents show their love to their children, especially by taking care of their souls, and snatching them as brands out of the burning. By this and other instances of the wisdom with which God endued him, Solomon had great reputation among his people. This was better to him than weapons of war; for this he was both feared and loved.

View All Discussusion for 1 Kings Chapter 3... 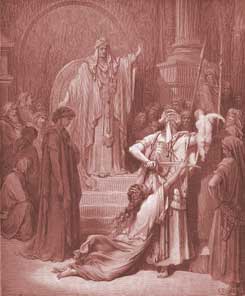 The Judgment of Solomon