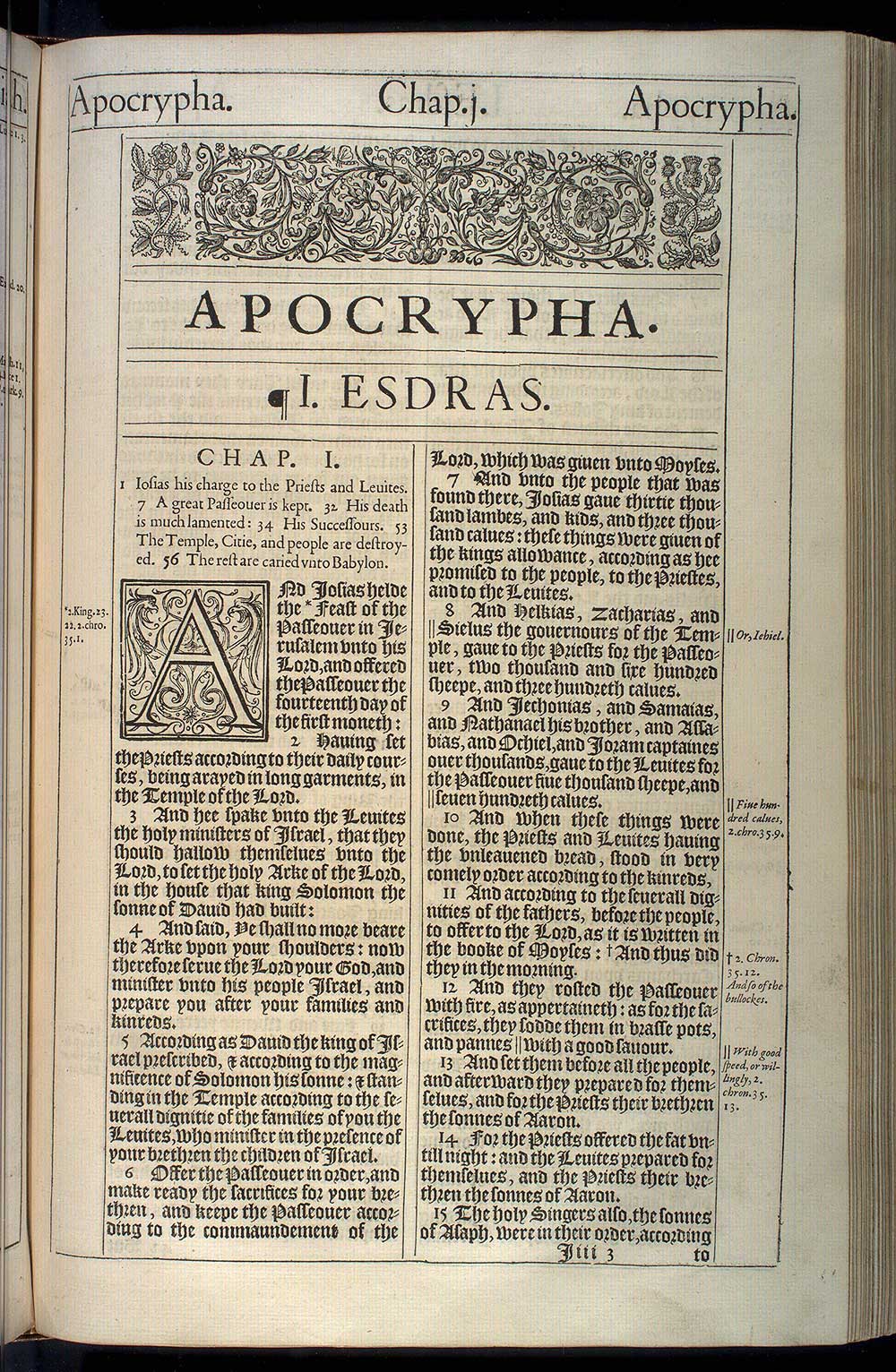 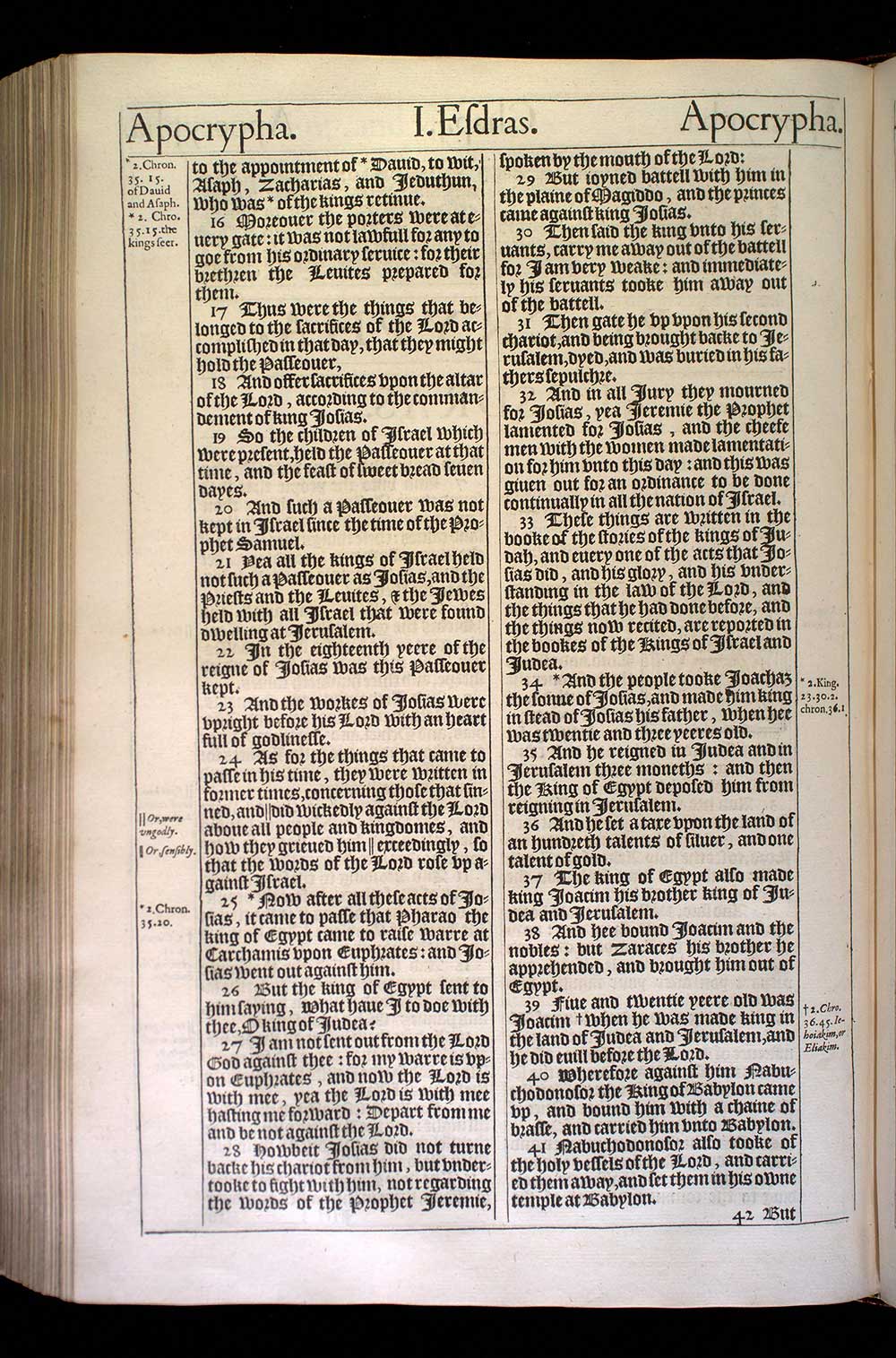 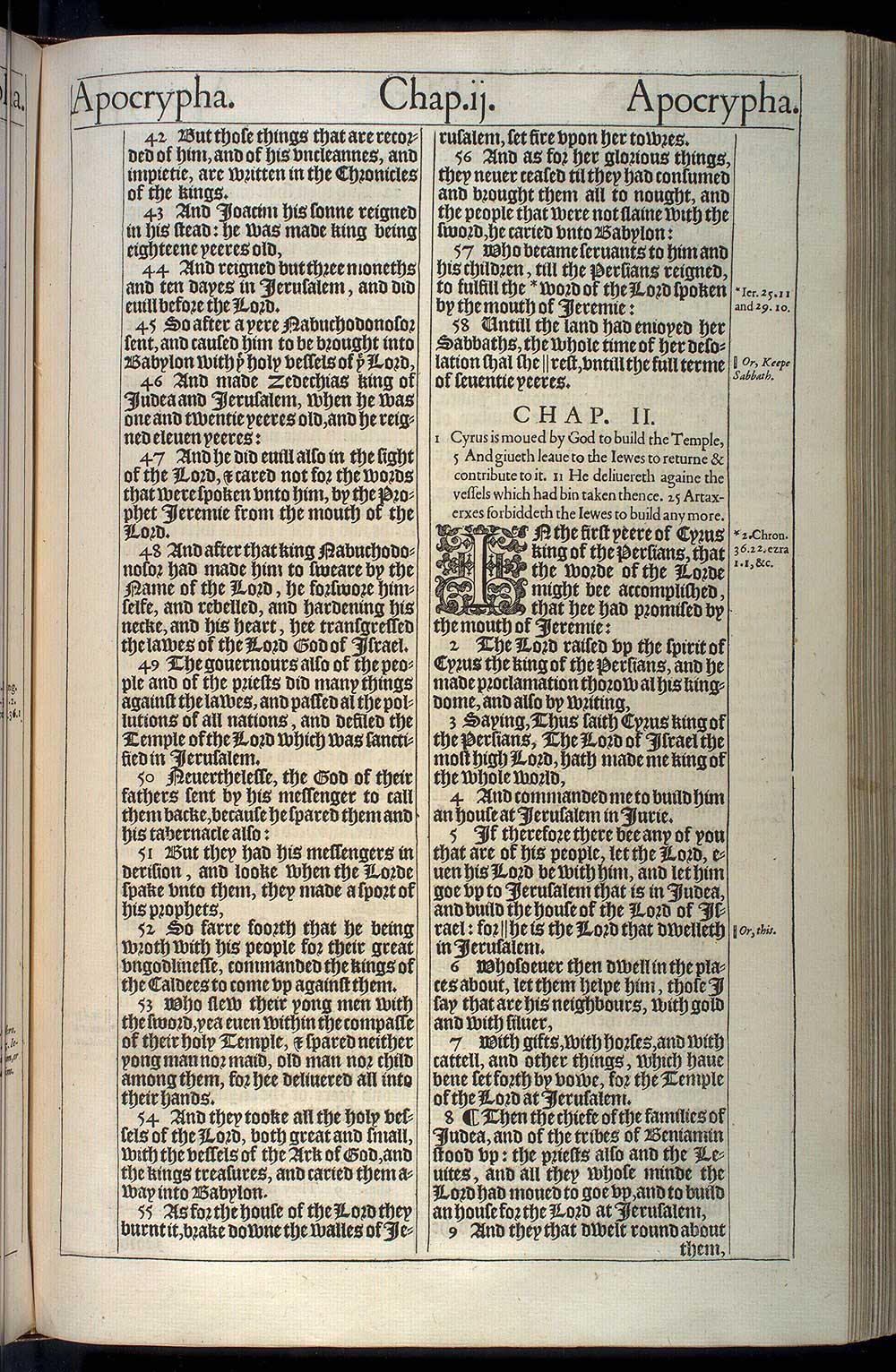 1 Iosias his charge to the Priests and Leuites. 7 A great Passeouer is kept. 32 His death is much lamented: 34 His Successours. 53 The Temple, Citie, and people are destroyed. 56 The rest are caried vnto Babylon.

1And Iosias helde the Feast of the Passeouer in Ierusalem vnto his Lord, and offered the Passeouer the fourteenth day of the first moneth:1

2Hauing set the Priests according to their daily courses, being arayed in long garments, in the Temple of the Lord.

3And hee spake vnto the Leuites the holy ministers of Israel, that they should hallow themselues vnto the Lord, to set the holy Arke of the Lord, in the house that king Solomon the sonne of Dauid had built:

4And said, Ye shall no more beare the Arke vpon your shoulders: now therefore serue the Lord your God, and minister vnto his people Israel, and prepare you after your families and kinreds.

5According as Dauid the king of Israel prescribed, & according to the magnificence of Solomon his sonne: & standing in the Temple according to the seuerall dignitie of the families of you the Leuites, who minister in the presence of your brethren the children of Israel.

6Offer the Passeouer in order, and make ready the sacrifices for your brethren, and keepe the Passeouer according to the commaundement of the Lord, which was giuen vnto Moyses.

7And vnto the people that was found there, Iosias gaue thirtie thousand lambes, and kids, and three thousand calues: these things were giuen of the kings allowance, according as hee promised to the people, to the Priestes, and to the Leuites.

8And Helkias, Zacharias, and Sielus the gouernours of the Temple, gaue to the Priests for the Passeouer, two thousand and sixe hundred sheepe, and three hundreth calues.8

10And when these things were done, the Priests and Leuites hauing the vnleauened bread, stood in very comely order according to the kinreds,

11And according to the seuerall dignities of the fathers, before the people, to offer to the Lord, as it is written in the booke of Moyses: And thus did they in the morning.11

12And they rosted the Passeouer with fire, as appertaineth: as for the sacrifices, they sodde them in brasse pots, and pannes with a good sauour.12

13And set them before all the people, and afterward they prepared for themselues, and for the Priests their brethren the sonnes of Aaron.

14For the Priests offered the fat vntill night: and the Leuites prepared for themselues, and the Priests their brethren the sonnes of Aaron.

15The holy Singers also, the sonnes of Asaph, were in their order, according to the appointment of Dauid, to wit, Asaph, Zacharias, and Ieduthun, who was of the kings retinue.15

16Moreouer the porters were at euery gate: it was not lawfull for any to goe from his ordinary seruice: for their brethren the Leuites prepared for them.

17Thus were the things that belonged to the sacrifices of the Lord accomplished in that day, that they might hold the Passeouer,

18And offer sacrifices vpon the altar of the Lord, according to the commandement of king Iosias.

19So the children of Israel which were present, held the Passeouer at that time, and the feast of sweet bread seuen dayes.

20And such a Passeouer was not kept in Israel since the time of the Prophet Samuel.

21Yea all the kings of Israel held not such a Passeouer as Iosias, and the Priests and the Leuites, & the Iewes held with all Israel that were found dwelling at Ierusalem.

22In the eighteenth yeere of the reigne of Iosias was this Passeouer kept.

23And the workes of Iosias were vpright before his Lord with an heart full of godlinesse.

24As for the things that came to passe in his time, they were written in former times, concerning those that sinned, and did wickedly against the Lord aboue all people and kingdomes, and how they grieued him exceedingly, so that the words of the Lord rose vp against Israel.24

25Now after all these acts of Iosias, it came to passe that Pharao the king of Egypt came to raise warre at Carchamis vpon Euphrates: and Iosias went out against him.25

26But the king of Egypt sent to him saying, What haue I to doe with thee, O king of Iudea?

28Howbeit Iosias did not turne backe his chariot from him, but vndertooke to fight with him, not regarding the words of the Prophet Ieremie, spoken by the mouth of the Lord:

29But ioyned battell with him in the plaine of Magiddo, and the princes came against king Iosias.

31Then gate he vp vpon his second chariot, and being brought backe to Ierusalem, dyed, and was buried in his fathers sepulchre.

32And in all Iury they mourned for Iosias, yea Ieremie the Prophet lamented for Iosias, and the cheefe men with the women made lamentation for him vnto this day: and this was giuen out for an ordinance to be done continually in all the nation of Israel.

33These things are written in the booke of the stories of the kings of Iudah, and euery one of the acts that Iosias did, and his glory, and his vnderstanding in the law of the Lord, and the things that he had done before, and the things now recited, are reported in the bookes of the Kings of Israel and Iudea.

34And the people tooke Ioachaz the sonne of Iosias, and made him king in stead of Iosias his father, when hee was twentie and three yeeres old.34

35And he reigned in Iudea and in Ierusalem three moneths: and then the King of Egypt deposed him from reigning in Ierusalem.

36And he set a taxe vpon the land of an hundreth talents of siluer, and one talent of gold.

37The king of Egypt also made king Ioacim his brother king of Iudea and Ierusalem.

38And hee bound Ioacim and the nobles: but Zaraces his brother he apprehended, and brought him out of Egypt.

39Fiue and twentie yeere old was Ioacim when he was made king in the land of Iudea and Ierusalem, and he did euill before the Lord.39

40Wherefore against him Nabuchodonosor the King of Babylon came vp, and bound him with a chaine of brasse, and carried him vnto Babylon.

41Nabuchodonosor also tooke of the holy vessels of the Lord, and carried them away, and set them in his owne temple at Babylon.

42But those things that are recorded of him, and of his vncleannes, and impietie, are written in the Chronicles of the kings.

43And Ioacim his sonne reigned in his stead: he was made king being eighteene yeeres old,

44And reigned but three moneths and ten dayes in Ierusalem, and did euill before the Lord.

45So after a yere Nabuchodonosor sent, and caused him to be brought into Babylon with þe holy vessels of þe Lord,

46And made Zedechias king of Iudea and Ierusalem, when he was one and twentie yeeres old, and he reigned eleuen yeeres:

47And he did euill also in the sight of the Lord, & cared not for the words that were spoken vnto him, by the Prophet Ieremie from the mouth of the Lord.

48And after that king Nabuchodonosor had made him to sweare by the Name of the Lord, he forswore himselfe, and rebelled, and hardening his necke, and his heart, hee transgressed the lawes of the Lord God of Israel.

49The gouernours also of the people and of the priests did many things against the lawes, and passed al the pollutions of all nations, and defiled the Temple of the Lord which was sanctified in Ierusalem.

50Neuerthelesse, the God of their fathers sent by his messenger to call them backe, because he spared them and his tabernacle also:

51But they had his messengers in derision, and looke when the Lorde spake vnto them, they made a sport of his prophets,

52So farre foorth that he being wroth with his people for their great vngodlinesse, commanded the kings of the Caldees to come vp against them.

53Who flew their yong men with the sword, yea euen within the compasse of their holy Temple, & spared neither yong man nor maid, old man nor child among them, for hee deliuered all into their hands.

54And they tooke all the holy vessels of the Lord, both great and small, with the vessels of the Ark of God, and the kings treasures, and caried them away into Babylon.

55As for the house of the Lord they burnt it, brake downe the walles of Ierusalem, set fire vpon her towres.

56And as for her glorious things, they neuer ceased til they had consumed and brought them all to nought, and the people that were not slaine with the sword, he caried vnto Babylon:

57Who became seruants to him and his children, till the Persians reigned, to fulfill the word of the Lord spoken by the mouth of Ieremie:57

58Untill the land had enioyed her Sabbaths, the whole time of her desolation shal she rest, vntill the full terme of seuentie yeeres.58