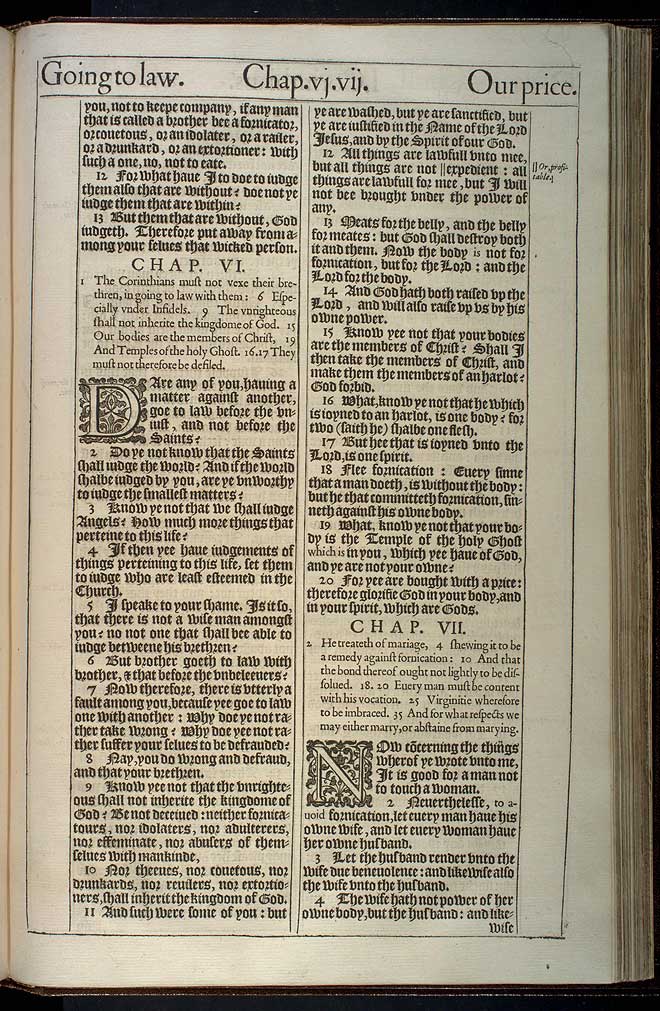 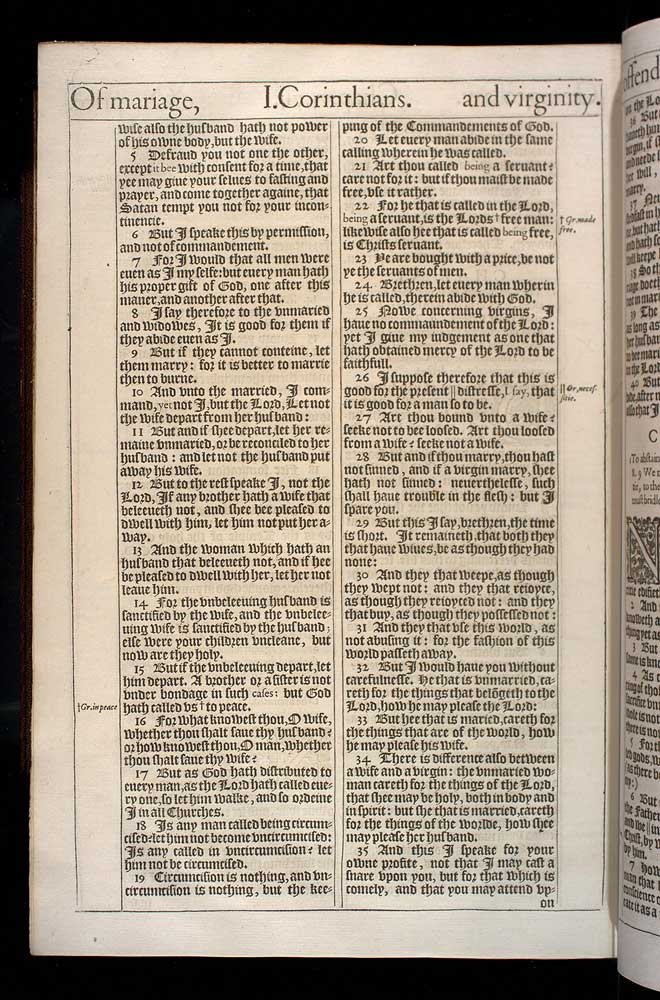 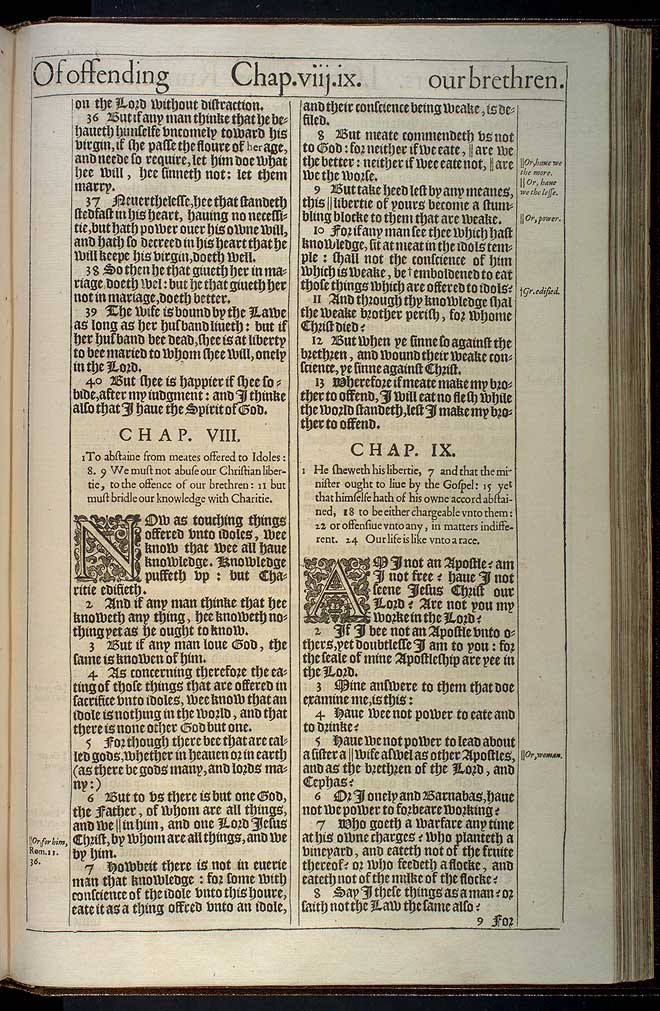 View this 1. Corinthians chapter 7 scan at a larger size

2 He treateth of mariage, 4 shewing it to be a remedy against fornication: 10 And that the bond thereof ought not lightly to be dissolued. 18. 20 Euery man must be content with his vocation. 25 Virginitie wherefore to be imbraced. 35 And for what respects we may either marry, or abstaine from marying.

1 Now cōcerning the things wherof ye wrote vnto me, It is good for a man not to touch a woman.

5 Defraud you not one the other, except it bee with consent for a time, that yee may giue your selues to fasting and prayer, and come together againe, that Satan tempt you not for your incontinencie.

6 But I speake this by permission, and not of commandement.

7 For I would that all men were euen as I my selfe: but euery man hath his proper gift of God, one after this maner, and another after that.

8 I say therefore to the vnmaried and widowes, It is good for them if they abide euen as I.

9 But if they cannot conteine, let them marry: for it is better to marrie then to burne.

10 And vnto the married, I command, yet not I, but the Lord, Let not the wife depart from her husband:

11 But and if shee depart, let her remaine vnmaried, or be reconciled to her husband: and let not the husband put away his wife.

12 But to the rest speake I, not the Lord, If any brother hath a wife that beleeueth not, and shee bee pleased to dwell with him, let him not put her away.

13 And the woman which hath an husband that beleeueth not, and if hee be pleased to dwell with her, let her not leaue him.

15 But if the vnbeleeuing depart, let him depart. A brother or a sister is not vnder bondage in such cases: but God hath called vs to peace.15

17 But as God hath distributed to euery man, as the Lord hath called euery one, so let him walke, and so ordeine I in all Churches.

20 Let euery man abide in the same calling wherein he was called.

21 Art thou called being a seruant? care not for it: but if thou maist be made free, vse it rather.

23 Ye are bought with a price, be not ye the seruants of men.

25 Nowe concerning virgins, I haue no commaundement of the Lord: yet I giue my iudgement as one that hath obtained mercy of the Lord to be faithfull.

26 I suppose therefore that this is good for the present distresse, I say, that it is good for a man so to be.26

28 But and if thou marry, thou hast not sinned, and if a virgin marry, shee hath not sinned: neuerthelesse, such shall haue trouble in the flesh: but I spare you.

29 But this I say, brethren, the time is short. It remaineth, that both they that haue wiues, be as though they had none:

31 And they that vse this world, as not abusing it: for the fashion of this world passeth away.

32 But I would haue you without carefulnesse. He that is vnmarried, careth for the things that belōgeth to the Lord, how he may please the Lord:

33 But hee that is maried, careth for the things that are of the world, how he may please his wife.

35 And this I speake for your owne profite, not that I may cast a snare vpon you, but for that which is comely, and that you may attend vpon the Lord without distraction.

36 But if any man thinke that he behaueth himselfe vncomely toward his virgin, if she passe the floure of her age, and neede so require, let him doe what hee will, hee sinneth not: let them marry.

37 Neuerthelesse, hee that standeth stedfast in his heart, hauing no necessitie, but hath power ouer his owne will, and hath so decreed in his heart that he will keepe his virgin, doeth well.

39 The wife is bound by the Lawe as long as her husband liueth: but if her husband bee dead, shee is at liberty to bee maried to whom shee will, onely in the Lord.

40 But shee is happier if shee sobide, after my iudgment: and I thinke also that I haue the Spirit of God.