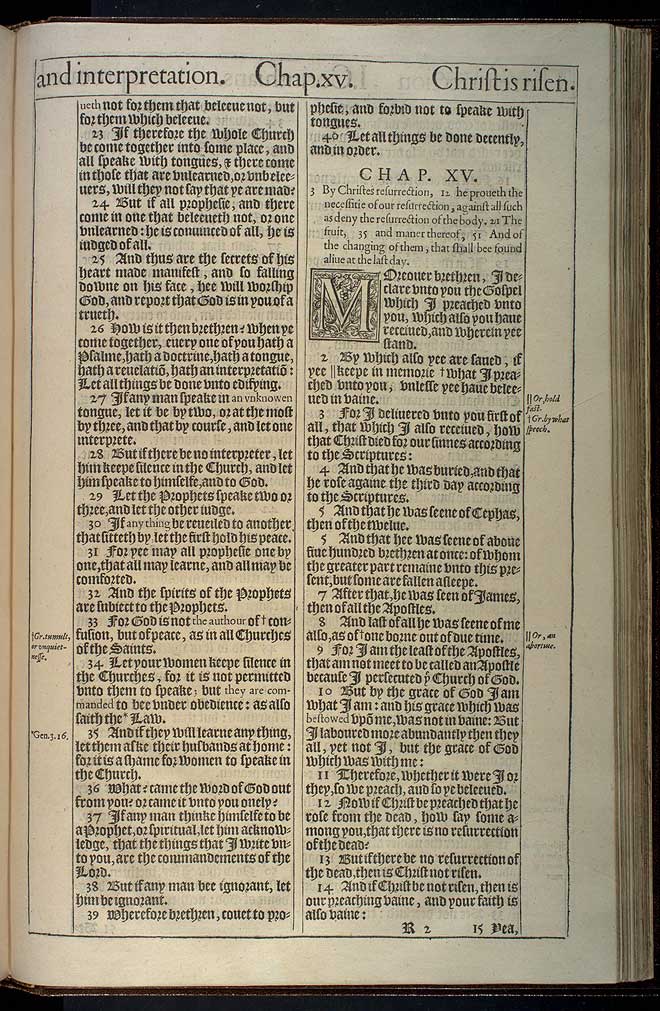 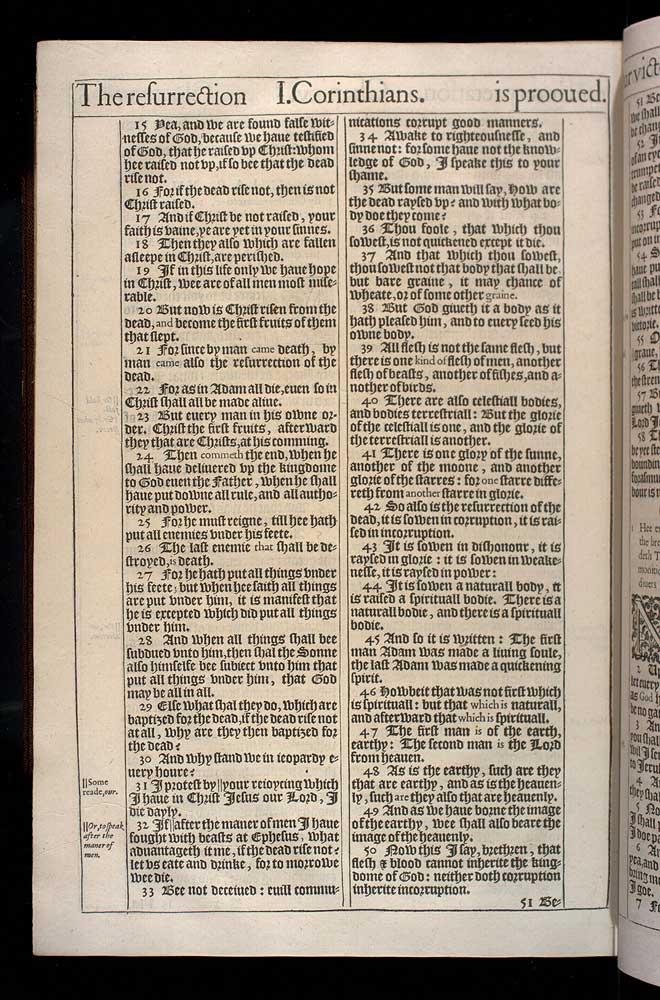 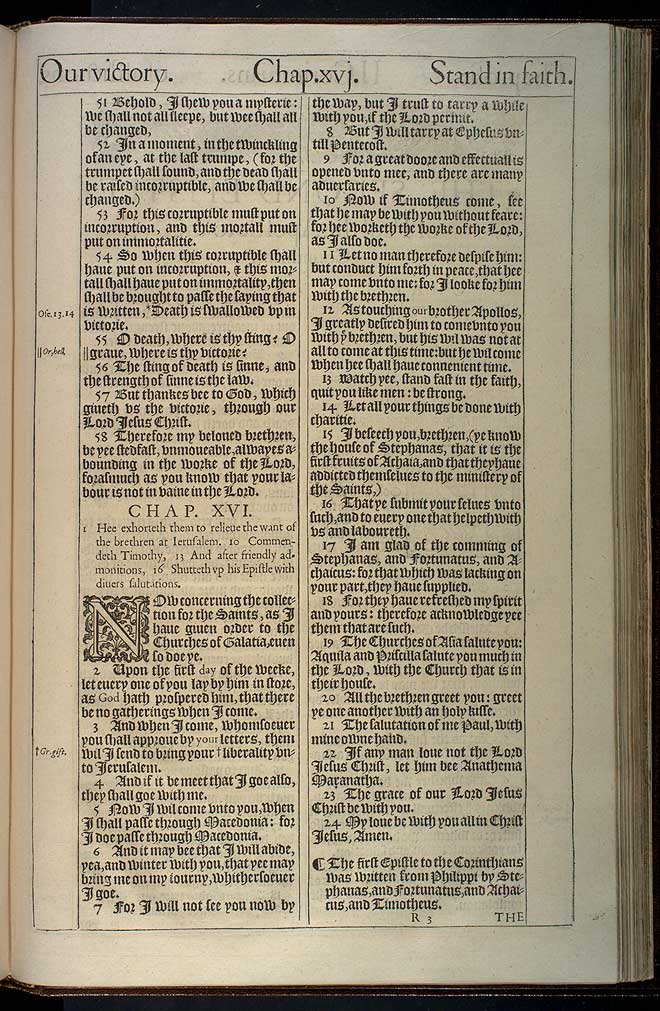 View this 1. Corinthians chapter 15 scan at a larger size

3 By Christes resurrection, 12 he proueth the necessitie of our resurrection, against all such as deny the resurrection of the body. 21 The fruit, 35 and maner thereof, 51 And of the changing of them, that shall bee found aliue at the last day.

1 Moreouer brethren, I declare vnto you the Gospel which I preached vnto you, which also you haue receiued, and wherein yee stand.

2 By which also yee are saued, if yee keepe in memorie what I preached vnto you, vnlesse yee haue beleeued in vaine.2

3 For I deliuered vnto you first of all, that which I also receiued, how that Christ died for our sinnes according to the Scriptures:

4 And that he was buried, and that he rose againe the third day according to the Scriptures.

5 And that he was seene of Cephas, then of the twelue.

6 And that hee was seene of aboue fiue hundred brethren at once: of whom the greater part remaine vnto this present, but some are fallen asleepe.

7 After that, he was seen of Iames, then of all the Apostles.

8 And last of all he was seene of me also, as of one borne out of due time.8

9 For I am the least of the Apostles, that am not meet to be called an Apostle because I persecuted þe Church of God.

11 Therefore, whether it were I or they, so we preach, aud so ye beleeued.

12 Now if Christ be preached that he rose from the dead, how say some among you, that there is no resurrection of the dead?

13 But if there be no resurrection of the dead, then is Christ not risen.

14 And if Christ be not risen, then is our preaching vaine, and your faith is also vaine:

15 Yea, and we are found false witnesses of God, because we haue testified of God, that he raised vp Christ: whom hee raised not vp, if so bee that the dead rise not.

16 For if the dead rise not, then is not Christ raised.

17 And if Christ be not raised, your faith is vaine, ye are yet in your sinnes.

18 Then they also which are fallen asleepe in Christ, are perished.

19 If in this life only we haue hope in Christ, wee are of all men most miserable.

20 But now is Christ risen from the dead, and become the first fruits of them that slept.

22 For as in Adam all die, euen so in Christ shall all be made aliue.

23 But euery man in his owne order. Christ the first fruits, afterward they that are Christs, at his comming.

25 For he must reigne, till hee hath put all enemies vnder his feete.

26 The last enemie that shall be destroyed, is death.

28 And when all things shall bee subdued vnto him, then shal the Sonne also himselfe bee subiect vnto him that put all things vnder him, that God may be all in all.

30 And why stand we in ieopardy euery houre?

31 I protest by your reioycing which I haue in Christ Iesus our Lord, I die dayly.31

32 If after the maner of men I haue fought with beasts at Ephesus, what aduantageth it me, if the dead rise not? let vs eate and drinke, for to morrowe wee die.32

34 Awake to righteousnesse, and sinne not: for some haue not the knowledge of God, I speake this to your shame.

35 But some man will say, How are the dead raysed vp? and with what body doe they come?

36 Thou foole, that which thou sowest, is not quickened except it die.

37 And that which thou sowest, thou sowest not that body that shall be, but bare graine, it may chance of wheate, or of some other graine.

38 But God giueth it a body as it hath pleased him, and to euery seed his owne body.

39 All flesh is not the same flesh, but there is one kind of flesh of men, another flesh of beasts, another of fishes, and another of birds.

41 There is one glory of the sunne, another of the moone, and another glorie of the starres: for one starre differeth from another starre in glorie.

42 So also is the resurrection of the dead, it is sowen in corruption, it is raised in incorruption.

47 The first man is of the earth, earthy: The second man is the Lord from heauen.

50 Now this I say, brethren, that flesh & blood cannot inherite the kingdome of God: neither doth corruption inherite incorruption.

51 Behold, I shew you a mysterie: we shall not all sleepe, but wee shall all be changed,

52 In a moment, in the twinckling of an eye, at the last trumpe, (for the trumpet shall sound, and the dead shall be raised incorruptible, and we shall be changed.)

56 The sting of death is sinne, and the strength of sinne is the law.

57 But thankes bee to God, which giueth vs the victorie, through our Lord Iesus Christ.

58 Therefore my beloued brethren, be yee stedfast, vnmoueable, alwayes abounding in the worke of the Lord, forasmuch as you know that your labour is not in vaine in the Lord.