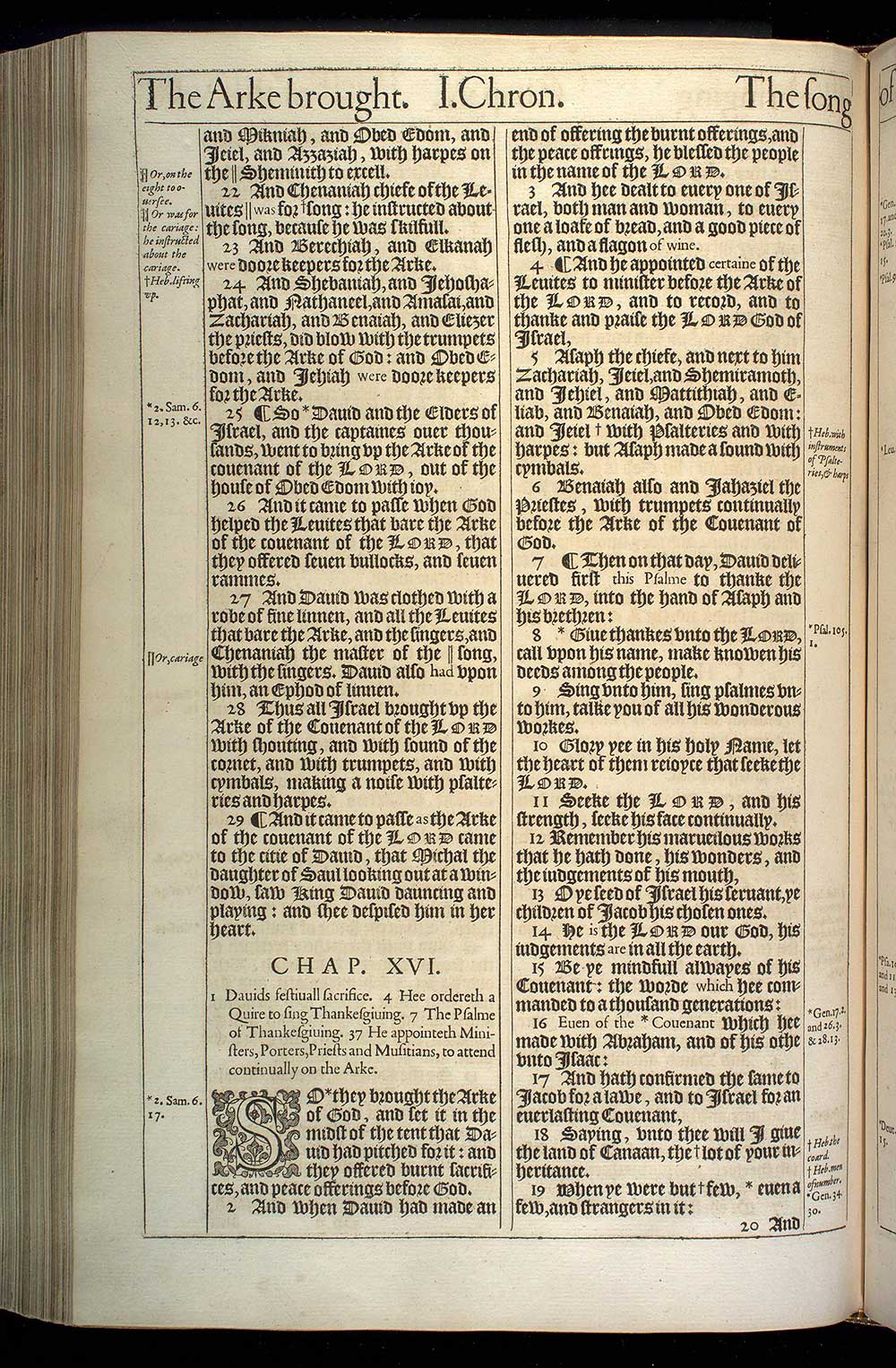 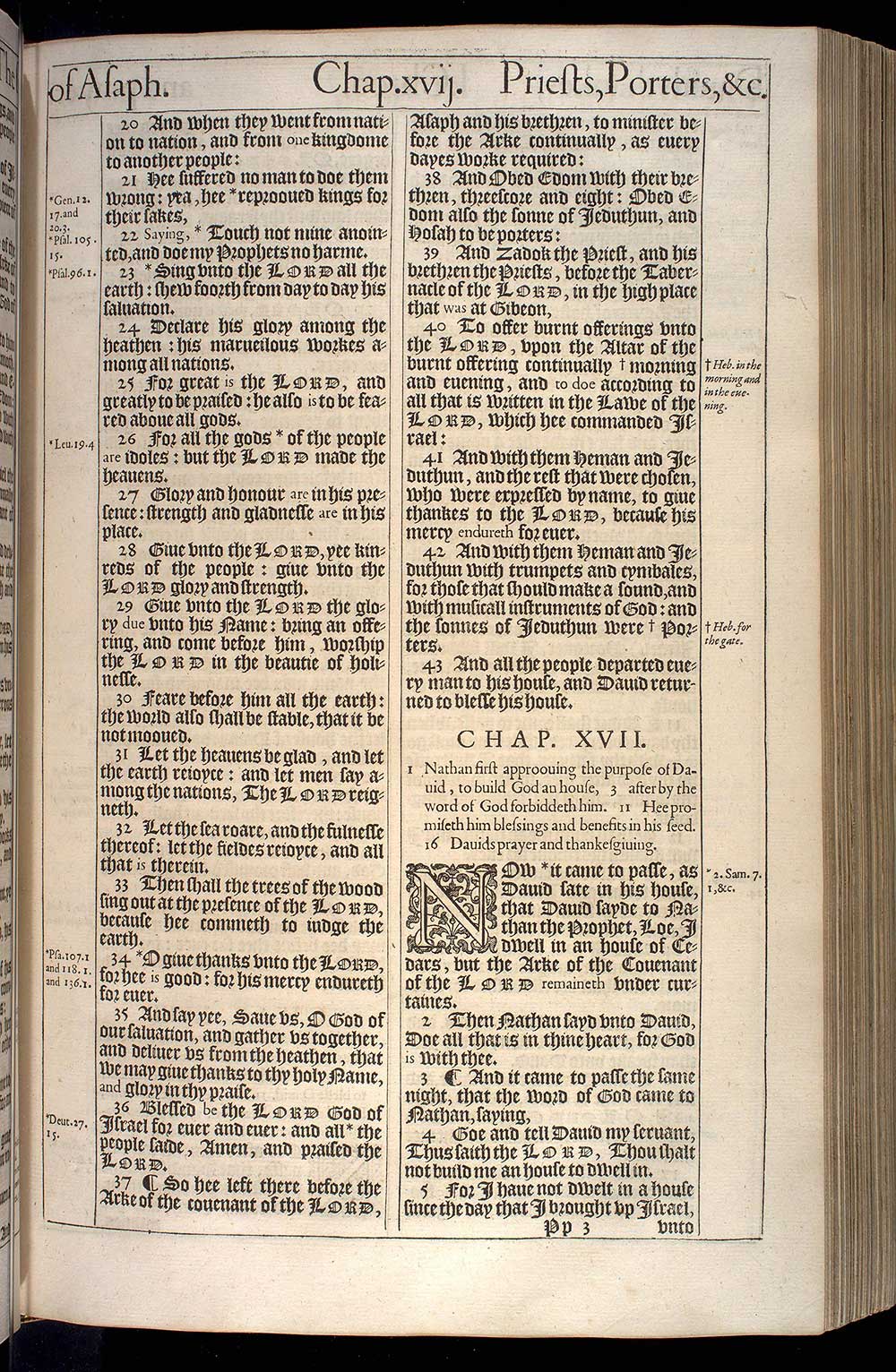 1 Dauids festiual sacrifice. 4 Hee ordereth a Quire to sing Thankesgiuing. 7 The Psalme of Thankesgiuing. 37 He appointeth Ministers, Porters, Priests and Musitians, to attend continually on the Arke.

1So they brought the Arke of God, and set it in the midst of the tent that Dauid had pitched for it: and they offered burnt sacrifices, and peace offerings before God.1

2And when Dauid had made an end of offering the burnt offerings, and the peace offrings, he blessed the people in the name of the Lord.

3And hee dealt to euery one of Israel, both man and woman, to euery one a loafe of bread, and a good piece of flesh, and a flagon of wine.

4¶ And he appointed certaine of the Leuites to minister before the Arke of the Lord, and to record, and to thanke and praise the Lord God of Israel,

5Asaph the chiefe, and next to him Zachariah, Ieiel, and Shemiramoth, and Iehiel, and Mattithiah, and Eliab, and Benaiah, and Obed Edom: and Ieiel with Psalteries and with harpes: but Asaph made a sound with cymbals.5

6Benaiah also and Iahaziel the Priestes, with trumpets continually before the Arke of the Couenant of God.

7¶ Then on that day, Dauid deliuered first this Psalme to thanke the Lord, into the hand of Asaph and his brethren:

8Giue thankes vnto the Lord, call vpon his name, make knowen his deeds among the people.8

9Sing vnto him, sing psalmes vnto him, talke you of all his wonderous workes.

10Glory yee in his holy Name, let the heart of them reioyce that seeke the Lord.

11Seeke the Lord, and his strength, seeke his face continually.

12Remember his marueilous works that he hath done, his wonders, and the iudgements of his mouth,

13O ye seed of Israel his seruant, ye children of Iacob his chosen ones.

14He is the Lord our God, his iudgements are in all the earth.

15Be ye mindfull alwayes of his Couenant: the worde which hee commanded to a thousand generations:

16Euen of the Couenant which hee made with Abraham, and of his othe vnto Isaac:16

17And hath confirmed the same to Iacob for a lawe, and to Israel for an euerlasting Couenant,

18Saying, vnto thee will I giue the land of Canaan, the lot of your inheritance.18

20And when they went from nation to nation, and from one kingdome to another people:

21Hee suffered no man to doe them wrong: yea, hee reprooued kings for their sakes,21

22Saying, Touch not mine anointed, and doe my Prophets no harme.22

23Sing vnto the Lord all the earth: shew foorth from day to day his saluation.23

24Declare his glory among the heathen: his marueilous workes among all nations.

25For great is the Lord, and greatly to be praised: he also is to be feared aboue all gods.

26For all the gods of the people are idoles: but the Lord made the heauens.26

29Giue vnto the Lord the glory due vnto his Name: bring an offering, and come before him, worship the Lord in the beautie of holinesse.

30Feare before him all the earth: the world also shall be stable, that it be not mooued.

31Let the heauens be glad, and let the earth reioyce: and let men say among the nations, The Lord reigneth.

32Let the sea roare, and the fulnesse thereof: let the fieldes reioyce, and all that is therein.

33Then shall the trees of the wood sing out at the presence of the Lord, because hee commeth to iudge the earth.

34O giue thanks vnto the Lord, for hee is good: for his mercy endureth for euer.34

35And say yee, Saue vs, O God of our saluation, and gather vs together, and deliuer vs from the heathen, that we may giue thanks to thy holy Name, and glory in thy praise.

36Blessed be the Lord God of Israel for euer and euer: and all the people saide, Amen, and praised the Lord.36

38And Obed Edom with their brethren, threescore and eight: Obed Edom also the sonne of Ieduthun, and Hosah to be porters:

39And Zadok the Priest, and his brethren the Priests, before the Tabernacle of the Lord, in the high place that was at Gibeon,

40To offer burnt offerings vnto the Lord, vpon the Altar of the burnt offering continually morning and euening, and to doe according to all that is written in the Lawe of the Lord, which hee commanded Israel:40

41And with them Heman and Ieduthun, and the rest that were chosen, who were expressed by name, to giue thankes to the Lord, because his mercy endureth for euer.

42And with them Heman and Ieduthun with trumpets and cymbales, for those that should make a sound, and with musicall instruments of God: and the sonnes of Ieduthun were Porters.42

43And all the people departed euery man to his house, and Dauid returned to blesse his house.