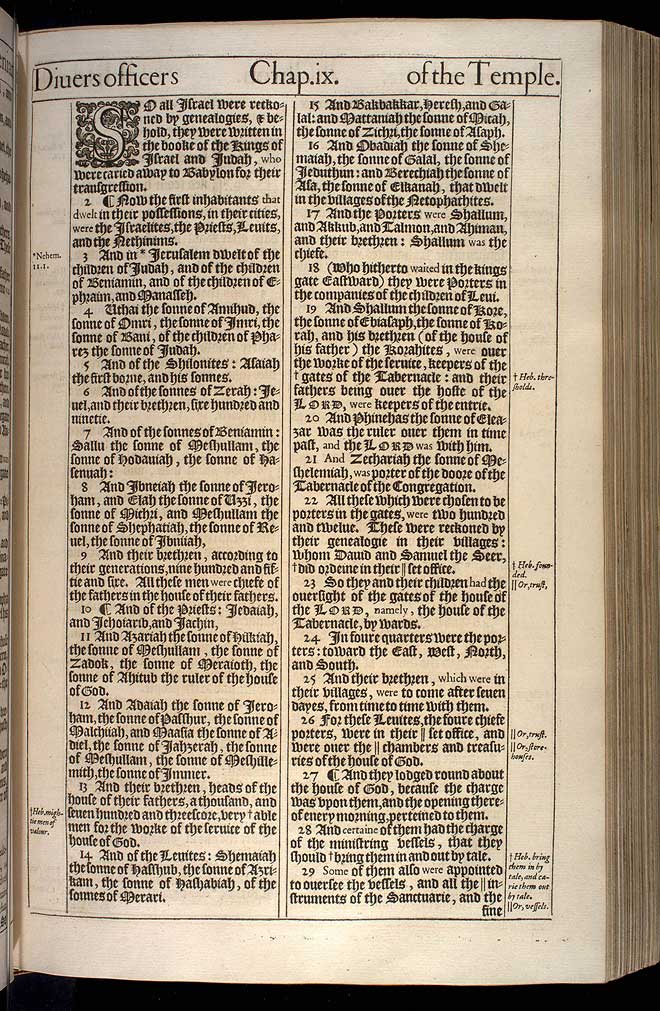 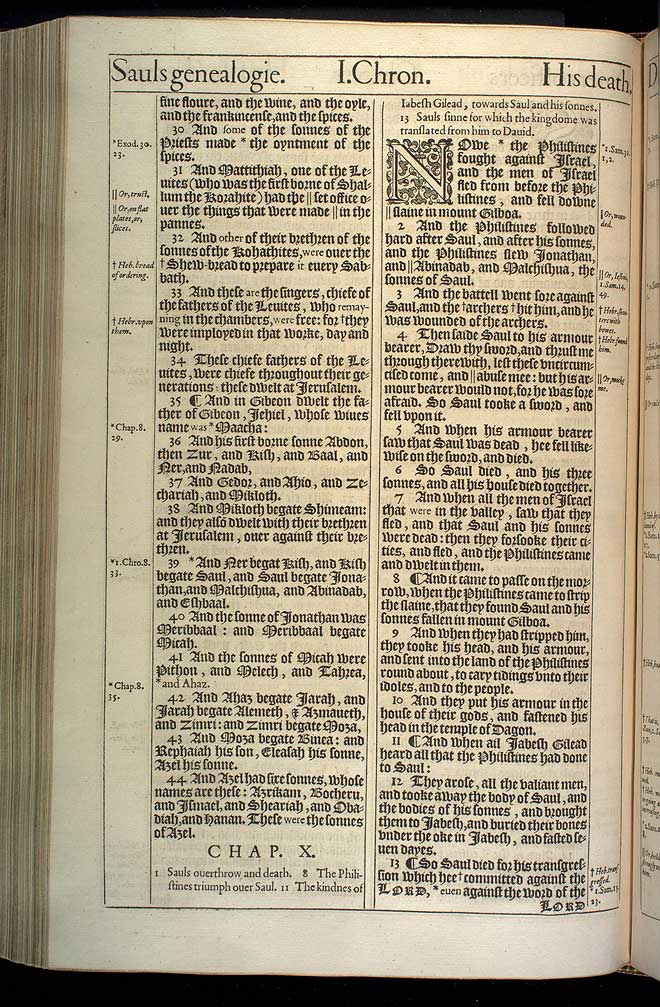 View this 1. Chronicles chapter 9 scan at a larger size

1 The originall of Israels and Iudahs genealogies. 2 The Israelites, 10 the Priests, 14 and the Leuites, with Nethinims which dwelt in Ierusalem. 27 The charge of certaine Leuites. 35 The stocke of Saul and Ionathan.

1 So all Israel were reckoned by genealogies, & behold, they were written in the booke of the Kings of Israel and Iudah, who were caried away to Babylon for their transgression.

2 ¶ Now the first inhabitants that dwelt in their possessions, in their cities, were the Israelites, the Priests, Leuits, and the Nethinims.

5 And of the Shilonites: Asaiah the first borne, and his sonnes.

6 And of the sonnes of Zerah: Ieuel, and their brethren, sixe hundred and ninetie.

9 And their brethren, according to their generations, nine hundred and fiftie and sixe. All these men were chiefe of the fathers in the house of their fathers.

13 And their brethren, heads of the house of their fathers, a thousand, and seuen hundred and threescore, very able men for the worke of the seruice of the house of God.13

17 And the Porters were Shallum, and Akkub, and Talmon, and Ahiman, and their brethren: Shallum was the chiefe.

18 (Who hitherto waited in the kings gate Eastward) they were Porters in the companies of the children of Leui.

20 And Phinehas the sonne of Eleazar was the ruler ouer them in time past, and the Lord was with him.

21 And Zechariah the sonne of Meshelemiah, was porter of the doore of the Tabernacle of the Congregation.

22 All these which were chosen to be porters in the gates, were two hundred and twelue. These were reckoned by their genealogie in their villages: whom Dauid and Samuel the Seer, did ordeine in their set office.22

24 In foure quarters were the porters: toward the East, West, North, and South.

25 And their brethren, which were in their villages, were to come after seuen dayes, from time to time with them.

26 For these Leuites, the foure chiefe porters, were in their set office, and were ouer the chambers and treasuries of the house of God.26

27 ¶ And they lodged round about the house of God, because the charge was vpon them, and the opening thereof euery morning, perteined to them.

28 And certaine of them had the charge of the ministring vessels, that they should bring them in and out by tale.28

29 Some of them also were appointed to ouersee the vessels, and all the instruments of the Sanctuarie, and the fine floure, and the wine, and the oyle, and the frankincense, and the spices.29

30 And some of the sonnes of the Priests made the oyntment of the spices.30

31 And Mattithiah, one of the Leuites (who was the first borne of Shallum the Korahite) had the set office ouer the things that were made in the pannes.31

32 And other of their brethren of the sonnes of the Kohathites, were ouer the Shew-bread to prepare it euery Sabbath.32

33 And these are the singers, chiefe of the fathers of the Leuites, who remayning in the chambers, were free: for they were imployed in that worke, day and night.33

34 These chiefe fathers of the Leuites, were chiefe throughout their generations; these dwelt at Ierusalem.

35 ¶ And in Gibeon dwelt the father of Gibeon, Iehiel, whose wiues name was Maacha:35

36 And his first borne sonne Abdon, then Zur, and Kish, and Baal, and Ner, and Nadab,

39 And Ner begat Kish, and Kish begate Saul, and Saul begate Ionathan, and Malchishua, and Abinadab, and Eshbaal.39

40 And the sonne of Ionathan was Meribbaal: and Meribbaal begate Micah.

41 And the sonnes of Micah were Pithon, and Melech, and Tahrea, and Ahaz.41

43 And Moza begate Binea: and Rephaiah his son, Eleasah his sonne, Azel his sonne.

44 And Azel had sixe sonnes, whose names are these: Azrikam, Bocheru, and Ismael, and Sheariah, and Obadiah, and Hanan. These were the sonnes of Azel.