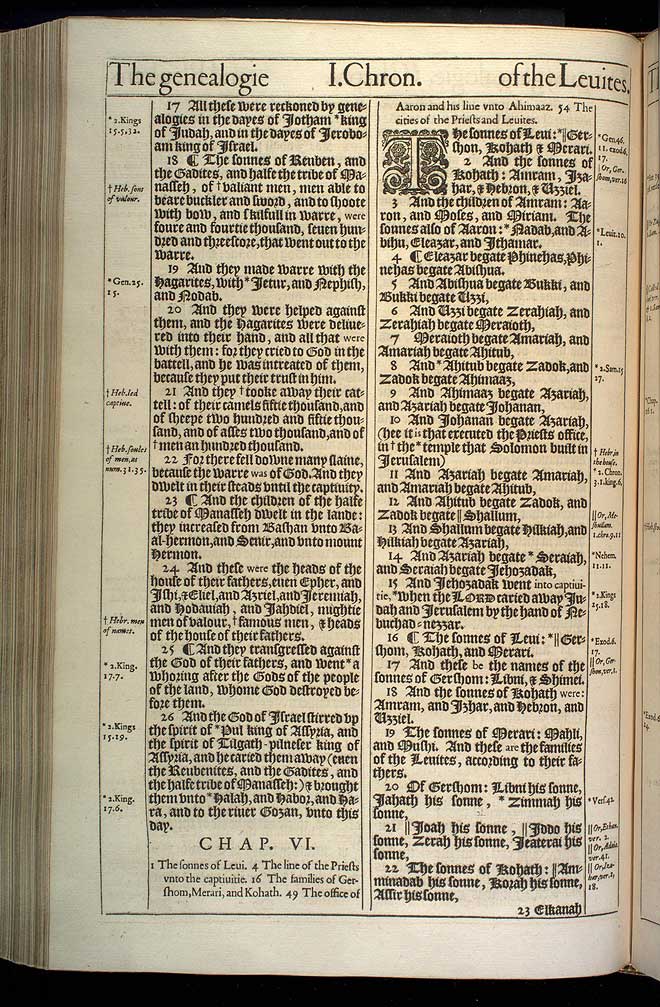 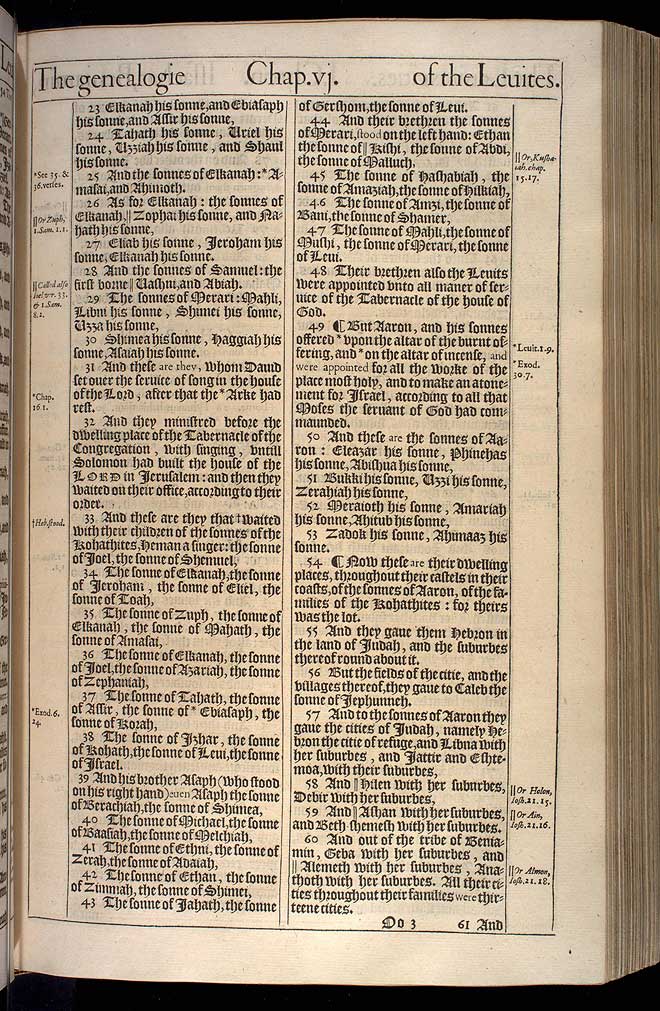 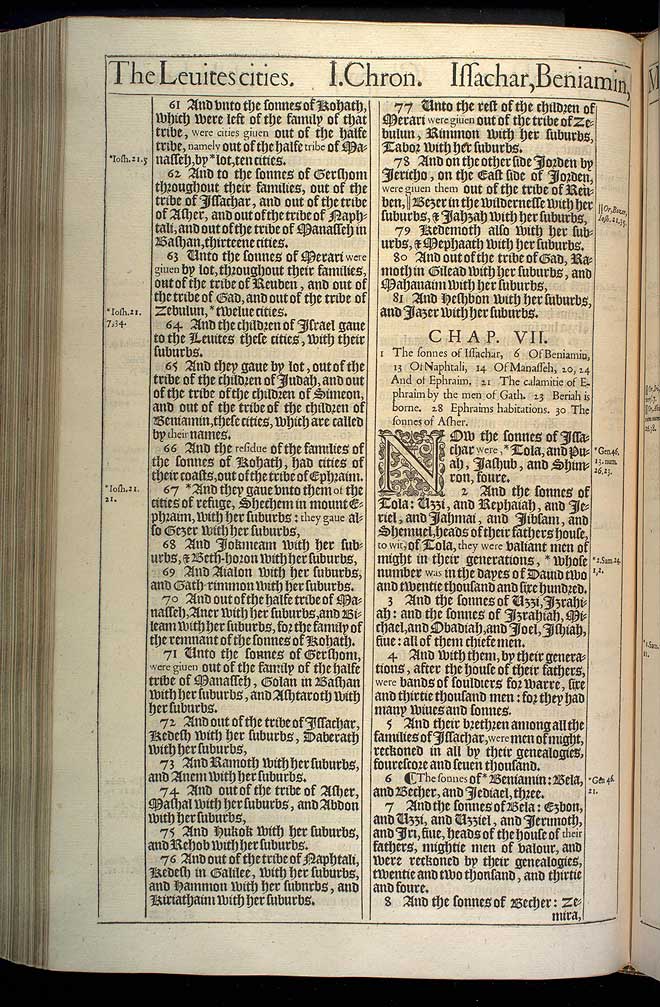 View this 1. Chronicles chapter 6 scan at a larger size

1 The sonnes of Leui. 4 The line of the Priests vnto the captiuitie. 16 The families of Gershom, Merari, and Kohath. 49 The office of Aaron and his line vnto Ahimaaz. 54 The cities of the Priests and Leuites.

3 And the children of Amram: Aaron, and Moses, and Miriam. The sonnes also of Aaron: Nadab, and Abihu, Eleazar, and Ithamar.3

10 And Iohanan begate Azariah, (hee it is that executed the Priests office, in the temple that Solomon built in Ierusalem)10

15 And Iehozadak went into captiuitie, when the Lord caried away Iudah and Ierusalem by the hand of Nebuchad-nezzar.15

17 And these be the names of the sonnes of Gershom: Libni, & Shimei.

18 And the sonnes of Kohath were: Amram, and Izhar, and Hebron, and Uzziel.

19 The sonnes of Merari: Mahli, and Mushi. And these are the families of the Leuites, according to their fathers.

25 And the sonnes of Elkanah: Amasai, and Ahimoth.25

26 As for Elkanah: the sonnes of Elkanah, Zophai his sonne, and Nahath his sonne,26

28 And the sonnes of Samuel: the first borne Uashni, and Abiah.28

31 And these are they, whom Dauid set ouer the seruice of song in the house of the Lord, after that the Arke had rest.31

32 And they ministred before the dwelling place of the Tabernacle of the Congregation, with singing, vntill Solomon had built the house of the Lord in Ierusalem: and then they waited on their office, according to their order.

33 And these are they that waited with their children of the sonnes of the Kohathites, Heman a singer: the sonne of Ioel, the sonne of Shemuel,33

39 And his brother Asaph (who stood on his right hand) euen Asaph the sonne of Berachiah, the sonne of Shimea,

48 Their brethren also the Leuits were appointed vnto all maner of seruice of the Tabernacle of the house of God.

49 ¶ But Aaron, and his sonnes offered vpon the altar of the burnt offering, and on the altar of incense, and were appointed for all the worke of the place most holy, and to make an atonement for Israel, according to all that Moses the seruant of God had commaunded.49

50 And these are the sonnes of Aaron: Eleazar his sonne, Phinehas his sonne, Abishua his sonne,

53 Zadok his sonne, Ahimaaz his sonne.

54 ¶ Now these are their dwelling places, throughout their castels in their coasts, of the sonnes of Aaron, of the families of the Kohathites: for theirs was the lot.

55 And they gaue them Hebron in the land of Iudah, and the suburbes thereof round about it.

56 But the fields of the citie, and the villages thereof, they gaue to Caleb the sonne of Iephunneh.

57 And to the sonnes of Aaron they gaue the cities of Iudah, namely Hebron the citie of refuge, and Libna with her suburbes, and Iattir and Eshtemoa, with their suburbes,

64 And the children of Israel gaue to the Leuites these cities, with their suburbs.

66 And the residue of the families of the sonnes of Kohath, had cities of their coasts, out of the tribe of Ephraim.