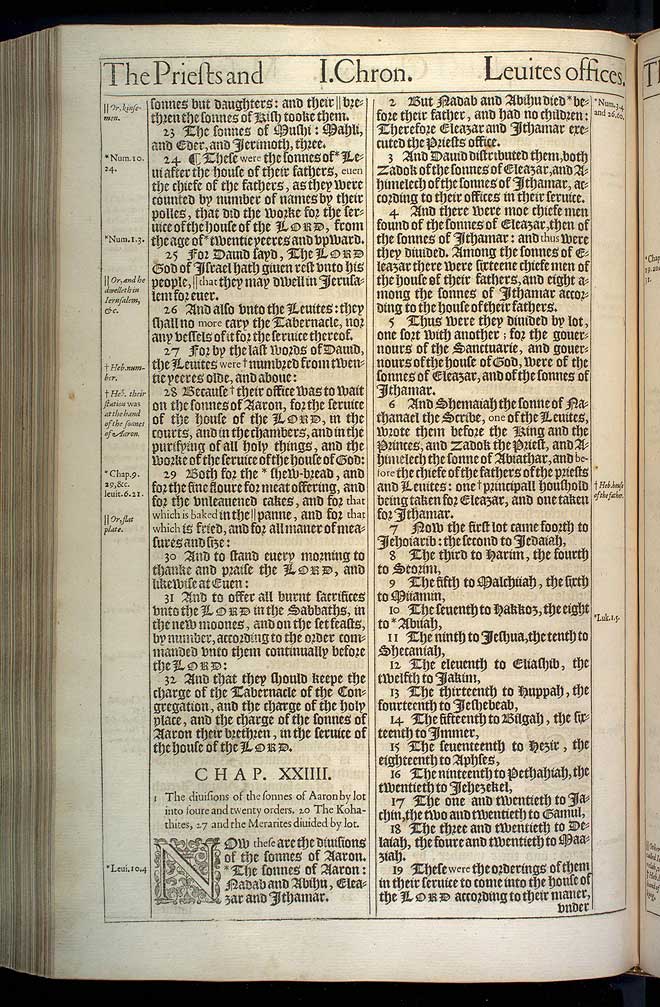 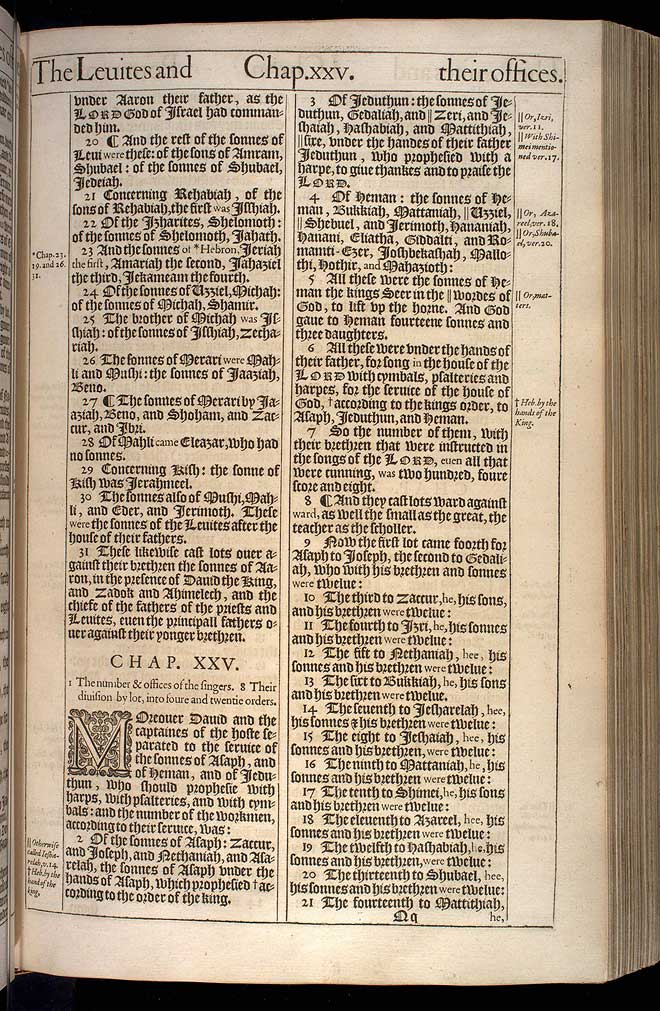 View this 1. Chronicles chapter 24 scan at a larger size

1 The diuisions of the sonnes of Aaron by lot into foure and twenty orders. 20 The Kohathites, 27 and the Merarites diuided by lot.

2 But Nadab and Abihu died before their father, and had no children: Therefore Eleazar and Ithamar executed the Priests office.2

6 And Shemaiah the sonne of Nathanael the Scribe, one of the Leuites, wrote them before the King and the Princes, and Zadok the Priest, and Ahimelech the sonne of Abiathar, and before the chiefe of the fathers of the priests and Leuites: one principall houshold being taken for Eleazar, and one taken for Ithamar.6

7 Now the first lot came foorth to Iehoiarib: the second to Iedaiah,

8 The third to Harim, the fourth to Seorim,

11 The ninth to Ieshua, the tenth to Shecaniah,

12 The eleuenth to Eliashib, the twelfth to Iakim,

13 The thirteenth to Huppah, the fourteenth to Ieshebeab,

14 The fifteenth to Bilgah, the sixteenth to Immer,

19 These were the orderings of them in their seruice to come into the house of the Lord according to their maner, vnder Aaron their father, as the Lord God of Israel had commanded him.

21 Concerning Rehabiah, of the sons of Rehabiah, the first was Isshiah.

22 Of the Izharites, Shelomoth: of the sonnes of Shelomoth, Iahath.

23 And the sonnes of Hebron, Ieriah the first, Amariah the second, Iahaziel the third, Iekameam the fourth.23

25 The brother of Michah was Isshiah: of the sonnes of Isshiah, Zechariah.

27 ¶ The sonnes of Merari by Iaaziah, Beno, and Shoham, and Zaccur, and Ibri.

28 Of Mahli came Eleazar, who had no sonnes.

29 Concerning Kish: the sonne of Kish was Ierahmeel.

30 The sonnes also of Mushi, Mahli, and Eder, and Ierimoth. These were the sonnes of the Leuites after the house of their fathers.